By Maria Saporta
As published in the Atlanta Business Chronicle on February 26, 2016

Delta Air Lines, already a significant contributor in the community, is announcing a major increase in its giving.

In a telephone interview on Feb. 24, Delta President Ed Bastian said the airline is announcing to employees that it will make an annual commitment to donate 1 percent of its net profits earned in the previous year.

“We will give roughly twice what we do currently,” said Bastian, who will become Delta’s CEO on May 2, succeeding Richard Anderson. “In 2016, we are making a commitment of $37 million — 1 percent of our net profits from last year of $3.7 billion.”

Bastian said the giving would be done throughout the system, including international markets where Delta flies. But he added that its home base of Atlanta could expect a significant increase in Delta’s philanthropic giving.

“We have obviously over the last 10 years been on a journey to improve every aspect of what we do as a company,” Bastian said, listing how Delta has stabilized its business formula and focused on the customer. “We think it’s time to make a formal commitment to investing in our communities in which we live and work.”

In a letter to employees and community partners scheduled to be sent Feb. 26, Bastian explained that Delta has an 80-year-long tradition of giving back to communities.

“Many people are drawn to Delta not just because of the service that you provide in our airports or on our airplanes, but in the way you represent our brand by donating your time, talents and resources to a variety of worthwhile causes,” Bastian’s letter states. “2015 was a remarkable year for Delta, and the communities we call home should share in this success.”

The contributions will be fulfilled with cash donations and in-kind travel as well as grants from the Delta Air Lines Foundation.

Bastian explained that Delta’s giving has been done on an “as-available basis.” The new commitment of giving 1 percent of net profits will formalize the giving. And if the airline does not have a profit in a particular year, giving will continue.

In fact, Bastian said he viewed Delta’s projected giving in 2016 as a “minimum commitment” the airline would give.

“When we went through the years of difficulty, we continued to give, but it was scaled back,” Bastian said. “We are not going to stop giving.”

That’s not all. The Delta Foundation, beginning on July 1, will match employee and retiree donations on a one-to-one basis for up to $5 million annually, targeting accredited nonprofit educational institutions from pre-K through post-graduate.

Unlike some corporations, which have shifted their giving to corporate marketing, Bastian described Delta’s program as “true philanthropic giving.” It also doesn’t include the thousands of hours that Delta employees volunteer each year. For example, in March, 46 Delta employees will build six homes with Habitat for Humanity International in Mexico as part of Delta’s global build.

Delta’s community philanthropy also is smart business, Bastian said. It builds employee loyalty and pride. And it also is important especially for the millennial generation, part of Delta’s growing customer base, which Bastian described as being “focused on giving their business to companies they value.”

As part the announcement, Delta also released an overview of its charitable giving in Atlanta. And President Ed Bastian said, “Atlanta will certainly see an increase in giving.”

Many local and national organizations have benefited from Delta’s giving in Atlanta. A few of the major contributions are as follows:

Center for Civil and Human Rights — Delta Air Lines is a lead corporate supporter of the CCHR with a $1 million initial grant for building and ongoing annual support of $200,000 per year;

The University of Georgia — The Delta Air Lines Foundation provided a $5 million grant for Delta Hall in Washington for the UGA in Washington program; and

Perhaps the most prestigious prize in Atlanta — the Ivan Allen Jr. Prize for Social Courage — was given to former Atlantan Nancy Parrish.

In introducing Parrish at a luncheon on Feb. 18, Georgia Tech President Bud Peterson called her “a shining light in the darkness.” Parrish founded Protect Our Defenders, a nonprofit that protects people in the military who have been sexually abused or harassed. 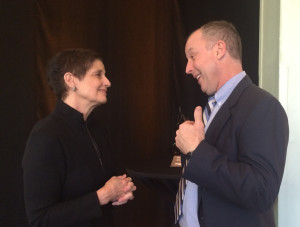 “Social Justice work by its nature is confronting powerful interests,” Parrish said. “And power concedes nothing. When I began this work the risk taken and the courage required by the survivors and those supporting them within the system was apparent.”

That’s when Parrish realized that she and her family also faced a danger.

“A common thread throughout the life of Ivan Allen Jr. and the prior recipients of this award is that each individual who strives to improve society — to fight for justice — can help make a change happen,” Parrish said.

In addition to Parrish, the Ivan Allen Jr. Prize has been awarded to Beatrice Mtetwa, a human rights defender; John Lewis, a Civil Rights icon; Dr. William Foege, a global health leader; and Sam Nunn, a leader in international security.

Recipients of the prize receive $100,000, thanks to a $2 million endowment from the Wilbur and Hilda Glenn Family Foundation. Parrish donated her prize money to Protect Our Defenders. 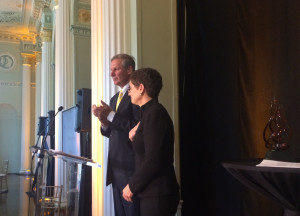