Column: Ed Powers stepping down as head of HOPE Atlanta 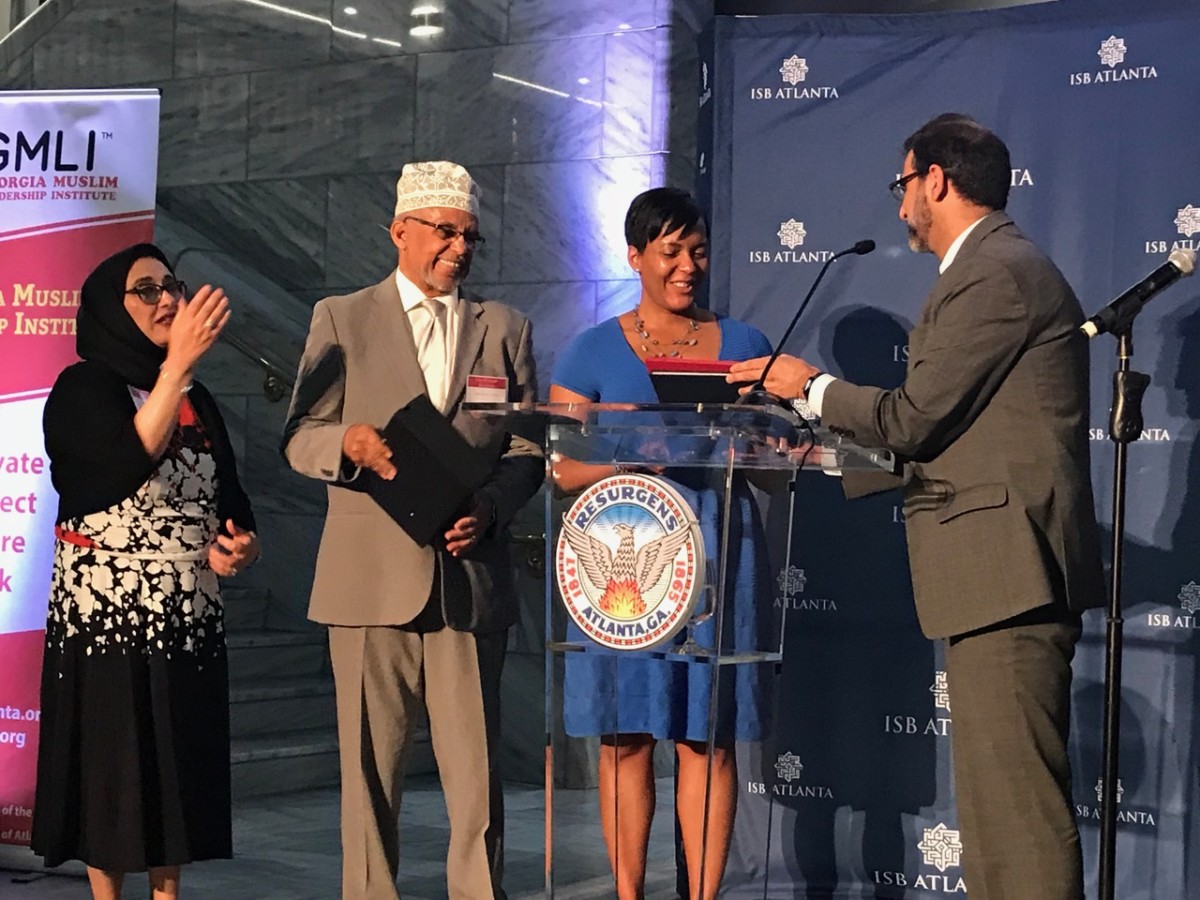 By Maria Saporta
As published in the Atlanta Business Chronicle on June 1, 2018

During his nearly 25-year tenure as executive director of HOPE Atlanta, Ed Powers shepherded the nonprofit through tremendous growth in serving the homeless as well as the rebranding of the agency from Travelers Aid of Atlanta.

Powers, who will turn 68 in July, has told his board he will retire at the end of the year.

“The timing is right,” Powers said in a telephone interview. “Twenty five years is a landmark period of time. I feel comfortable having taken this 118-year-old organization from a small nonprofit to a large nonprofit helping the homeless. It’s always good to get out when you’re on top.” 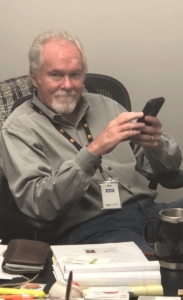 Under his leadership, Travelers Aid of Atlanta evolved from a nonprofit primarily serving Atlanta’s transient population and recent arrivals, to providing comprehensive services to thousands of homeless and extremely low-income citizens. The staff has grown to more than 80 people working from 12 offices in five counties.

For years, the nonprofit had thought about changing its name from Travelers Aid, confusing for some who thought it was an insurance company. Seven years ago, it adopted the name HOPE Atlanta (an acronym for Housing, Outreach, Prevention, Emergency Services) to better reflect its broader mission.

HOPE Atlanta’s services include specialized case management and housing to veterans and their families, persons living with HIV/AIDS, persons with disabilities and other factors that require supportive home environments. It works with grandparents raising grandchildren as well as households in danger of becoming homeless.

“Ed Powers has been the heart and soul of HOPE Atlanta for more than 25 years,” said Steve Tedder, chair of HOPE Atlanta’s board. “His thoughtful leadership and strategic insights have guided the 118-year-old agency through a period of profound expansion as we’ve responded to the growing needs of our most vulnerable citizens – those without shelter and living on our streets.”

Powers also will complete his tenure as board president of Travelers Aid International – the global association – later this month. 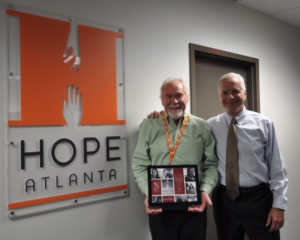 Ed Powers stand with Tom Andrews of Mercy Care who is a member of HOPE Atlanta’s advisory board (Special: HOPE Atlanta)

Despite its growth, HOPE Atlanta has remained true to its roots in reunifying the homeless with their families.

Powers said the Atlanta region has been successful in making a dent in its homeless population in the past decade.

“It is a community that really does care about the least of us,” Powers said. “The homeless will always be around, but we as a community can never stop trying to serve.”

HOPE Atlanta’s has retained Theisen Consulting to lead the search for a new executive director with a goal of completing the search by December.

The City of Atlanta held its second annual Iftar Dinner in the atrium of City Hall May 29th with Atlanta Mayor Keisha Lance Bottoms serving as the host.

The Iftar dinner is a Muslim religious observance of Ramadan when people gather to break the fast at sunset. Ramadan is a month long observance for Muslims. 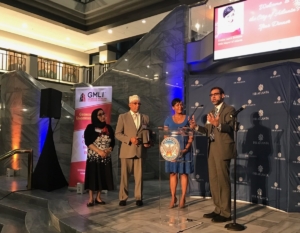 “Atlanta is one of only a few cities to host an Iftar dinner,” said Soumaya Khalifa, executive director and founder of the Islamic Speakers Bureau of Atlanta. She said that as far as she knows, New York City is the only other city to host a city-sponsored Iftar dinner.

The dinner brought together Muslims, Jews and Christians, and religious leaders spoke of Atlanta as a unified city.

Gerald Durley, pastor emeritus of Providence Missionary Baptist Church, looked over the 250 people gathered in the City Hall atrium and said, “Right now what I see is what Martin Luther King Jr. called the beloved community.”

Mayor Bottoms agreed. “This is my vision for Atlanta – One Atlanta,” she said. “This room is really the epitome of One Atlanta. Atlanta is a welcoming city for people of all faiths and backgrounds. Our diversity is our strongest asset.”

Bottoms said metro Atlanta has at least 100,000 Muslims, and there are 80 mosques throughout the state. 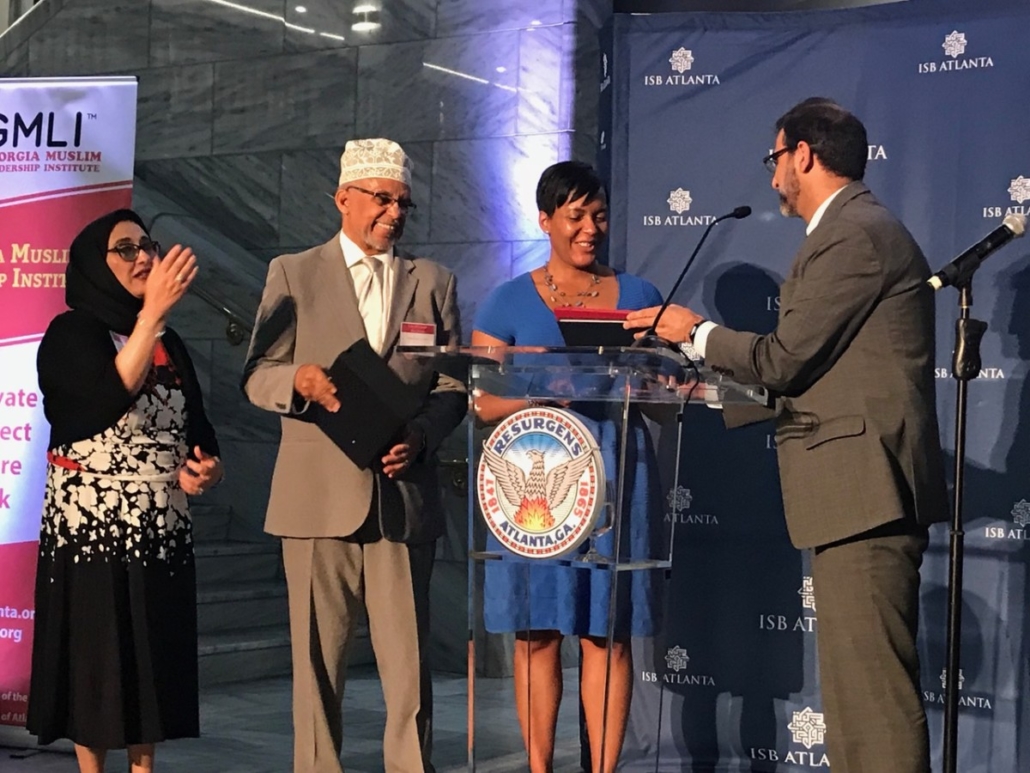 Lauren and Jim Grien received the Selig Distinguished Service Award of the Atlanta Jewish Committee at a recent dinner at the Georgia Aquarium.

The Griens have a family foundation. Jim Grien is president and CEO of TM Capital Corp. And Lauren Grien just completed her tenure as president of the Atlanta chapter of the AJC at its annual meeting on May 19.

The dinner, held on May 8, was co-chaired by Diane and Kent Alexander, Karen Kerness and Rabbi Peter Berg, Lila and Doug Hertz, and Billi and Bernie Marcus. The event, which is tied to AJC’s annual campaign, raised more than $1.2 million.

The event also featured remarks by AJC’s CEO, David Harris. It also included a presentation to participants in the Leaders For Tomorrow (LFT) program for high school sophomores and juniors. The 31 students from 17 different schools across metro Atlanta participated in a year-long program learning about Jewish and Israeli history, advocacy and coalition building.