Column: Egbert Perry gets new blood on the board of Fannie Mae

Egbert Perry couldn’t be more proud of the three new people who have been elected to Fannie Mae’s board — describing them as part of the organization’s new leadership.

Perry, who is board chairman of Fannie Mae and also CEO of Atlanta-based commercial real estate developer Integral Group, described the three leaders as “seasoned executives.”

They include Renee Glover, former head of the Atlanta Housing Authority; Michael Heid, who recently retired as president of Wells Fargo Home Mortgage, the largest originator of single-family mortgages in the United States; and Hugh R. Frater, former chairman and CEO of Berkadia Commercial Mortgage, one of the nation’s largest multifamily lenders.

“Fannie is the largest financial institution in the United States in asset-size,” Perry said in a telephone conversation June 14. “It’s all about housing finance.”

“These three fit so well with our board,” Perry said. “Mike Heid brings us perspective as a customer and partner. In Renee’s case, while she was at AHA she was regarded as the best [housing] authority CEO in the nation that took it from worst to first. She is deeply involved in affordable housing issues. And Hugh has run one the most successful multifamily companies in the country.”

Perry joined Fannie Mae’s board nearly eight years ago, and he has been chairman for almost three years. Several of the other directors have served on the board for the same tenure, but there is now some turnover. A mandatory retirement age has led to the departure of two directors, and there are more board changes planned.

“It’s a forward-looking time,” Perry said. “It’s time for new blood. We are pleased with the progress we’ve made, but we still have a lot of work to do.”

The Bobby Dodd Institute has named Larry Gluth as its next president and CEO.

Gluth will succeed Wayne McMillan, who will retire in July after more than 16 years with the organization. 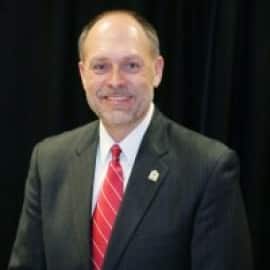 Gluth, who will begin his tenure on Aug. 1, currently serves as senior vice president of United States and Canada for Habitat for Humanity International. He started out as a Habitat volunteer while working as an executive at Starbucks Corp. in Seattle.

When Hurricanes Katrina and Rita struck in 2005, Gluth took a yearlong sabbatical from Starbucks in order to volunteer full-time with Habitat on the Gulf Coast. He returned to Starbucks, but in 2007, he joined the Habitat for Humanity International staff full-time.

Respected as a business leader and strategic thinker, Gluth has more than three decades of leadership experience in the private and nonprofit sectors. During his time at Habitat, Gluth launched the organization’s Neighborhood Revitalization Initiative and invested in a long-term strategy for Habitat ReStores. These actions helped Habitat double the number of families served in the United States to nearly 10,000 last year.

Gluth and his wife, Gailynn, have been active in the developmental disability community for the past decade. They reside in Sandy Springs with their son, Connor.

“The mission of the Bobby Dodd Institute is one that resonates strongly with me,” Gluth says. “I am grateful for the opportunity to serve and provide leadership to an organization with such a strong foundation and a future that’s bright.

“We are excited about Mr. Gluth’s track record as a business executive, nonprofit leader, and an advocate for people with disabilities,” said Rodney Hall, an Iberia Bank executive who chaired the search for BDI “We welcome him to BDI and look forward to growing with him as we provide job training and employment for even more people with disabilities in our community.”

“It’s a mind-boggling figure,” said Doug Hertz, chairman of the Woodruff Arts Center board, at a reception June 13 to celebrate the campaign. He said the corporate dollars were essential to the operations of the Center, which receives precious little in public funds. “We would like more public support.”

Jim Hannan, CEO of Georgia-Pacific, chaired the campaign and received a small bust of  Coca-Cola legend Robert W. Woodruff, who provide the initial philanthropic funding for the institution.

The campaign was able to secure 63 new donors that contributed nearly $650,000, Hannan said. The largest donors to the 2015-2016 campaign – with donations of more than $500,000 – were Bank of America, the Coca-Cola Co., Delta Air Lines, Georgia Power, the Home Depot, SunTrust and Wells Fargo.

Initially, the goal had been $15.2 million, but when the Center negotiated the lease of the Verizon Wireless Amphitheater in January with Live Nation, that impacted the projected contributions to the campaign, so they revised the goal to just set a new record.

“It’s still a substantial increase,” Hannan said, who added that he enjoyed chairing the campaign, which is led by an able staff at the Center.