By Maria Saporta
Published in the Atlanta Business Chronicle on October 24, 2014

Atlanta real estate developer Charlie Hendon will be honored by Elton John in New York on Oct. 28 for his support of the Elton John AIDS Foundation.

The event will be the 13th annual “An Enduring Vision” benefit, which recognizes supporters and friends of the foundation. The gala will be held at Cipriani Wall Street in New York City, and it will benefit the Elton John AIDS Foundation. It will be hosted by CNN anchor Anderson Cooper (for the seventh year), and it will feature Elton John performing a solo set on piano as well as a special musical guest. 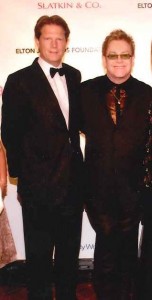 John will present the awards along with David Furnish, the chairman of the foundation. Other honorees will be New York Gov. Andrew Cuomo, Jay Jopling, and Nathalie and Pablo Salame for their leadership in the fight against AIDS and their support for the foundation’s work.

Hendon is known in real estate circles as a “serious music fan.” His love of Elton John’s music began as a boy, and he found refuge from an unstable household in Elton John’s songs. They met at an Elton John AIDS Foundation fundraiser in the late 1990s, and they have continued their friendship and their commitment to an “AIDS-free future” ever since.

Hendon is president of Hendon Properties. He founded the company in 1985, and it now has developed a national presence. But he seems to have become best known for his love of music. At the annual retail real estate convention in Las Vegas, Hendon has been putting on his own musical extravaganza called “Hendon Rocks.”

The musicians who have played at Hendon Rocks have included members of .38 Special, Cheap Trick, The Romantics and Rolling Stones keyboardist Chuck Leavell.

Elton John created his AIDS Foundation more than 20 years ago, first in the United States in 1992, and then in the United Kingdom in 1993. The two foundations have raised more than $300 million over the past two decades to combat stigma, prevent infections, provide treatment and services, and motivate governments to end AIDS.

The Marcus Jewish Community Center of Atlanta has successfully concluded its $7 million “Framework for the Future” capital campaign, chaired by Ron Brill, former chief administrative officer for the Home Depot.

“For more than two years, our team has worked closely to plan and conduct” the campaign, Brill said. “Implementing these critical updates will be transformative for the MJCCA and for the 55,000 people we serve each year.”

Gail Luxenberg, MJCCA’s CEO, said the generosity of its donors will enable the Center to enhance existing facilities and its infrastructure.

The campaign will help pay for renovations and enhancements of the Center’s facilities at its Dunwoody Zaban Park campus and its overnight summer camp in Cleveland, Ga.–Camp Barney Medintz.

The Atlanta Women’s Foundation has a new board chair and a couple of new directors.

“I am excited for what is ahead for the Foundation,” Goodman said in a statement. “The organization is in an incredible period of growth and I’m honored to be a part of the process.”

AWF also has elected Lisa Borders, chair of the Coca-Cola Foundation and vice president of Global Community Connections at The Coca-Cola Co., to its board. Borders has a diverse background in health care, philanthropy, public service and civic leadership. Her election also continues the close ties between AWF and The Coca-Cola Co.

“We are honored and excited to have Lisa join our board,” said AWF Executive Director Kelly Dolan. “She brings energy and enthusiasm and a true desire to make a difference in the lives of women and girls in our community.”

The second new member elected to AWF’s board is Susan Been, managing director of Wilson Parker Homes. Been is described as an “impassioned philanthropist” with deep Atlanta ties. She has a long history of supporting children’s charities and fundraising events in the community.

The Atlanta Women’s Foundation will hold its annual Numbers Too Big to Ignore luncheon on Nov. 6 when Fortune Magazine’s Pattie Sellers will be the keynote speaker.

Instead of giving a more traditional talk about what faith means to her, General Motors CEO Mary Barra participated in a fireside chat at the Rotary Club of Atlanta’s 16th Annual Interfaith Business Prayer Breakfast Oct. 22.

Charlie Ogburn asked her questions about her role models in life. Her mother figured prominently because of her love of life and her deep faith. He asked Barra if she preferred Coke or Pepsi, and she correctly answered “Coke.” Retired Coca-Cola CEO Neville Isdell is on her board.

Sitting in the audience at the breakfast at the Hyatt Regency Atlanta was another board member — Erroll Davis, the former superintendent of the Atlanta Public Schools and the former chancellor of the Georgia Board of Regents. Barra made a passing reference to having a board member in the room.

Most of the conversation was about the challenges she has faced since becoming CEO of one of the world’s largest companies. Despite the problems she inherited, Barra said her approach has been to take responsibility and to do the right thing.

“My mother used to say: ‘The truth will set you free,'” Barra said. “I felt I was there representing all of General Motors.”

Pat Falotico, a retired executive with IBM serving as the senior executive in Georgia, has been named CEO of the Greenleaf Center for Servant Leadership, an organization with a mission to build awareness for what it takes to be a servant leader.

Falotico served on the boards of the United Way of Greater Atlanta, (chairing its 2013 campaign), the Metro Atlanta Chamber, Communities in Schools of Georgia, Leadership Atlanta, Girls Inc. and the Ron Clark Academy.

“The role allows me to work at the intersection of my experience and my passion for developing leaders while continuing to serve society,” Falotico said.

Joe Patrnchak, a trustee of the organization and chair of its search committee, said Falotico met their hopes for a new CEO.

“We were looking for some specific leadership qualities and proven business skills to develop a strategic plan, focus on the priorities and execute on that plan,” he said in a release announcing her appointment “It was also critical to find someone with nonprofit experience who lives the philosophy of a servant leader. We were fortunate to find Pat at this point in her career — transitioning from IBM and dedicating herself full time to the nonprofit world. During her outstanding 31 year career at IBM, she demonstrated all of the qualities of a servant leader.”

Falotico will continue to live in Atlanta working from the Greenleaf Center’s office in the Foundation Center at the Georgia Pacific building. The Greenleaf Center opened its Atlanta office earlier this year to increase its programmatic reach and expand operational capacity. The Center maintains a strong presence in and commitment to its work in the greater Indianapolis area.