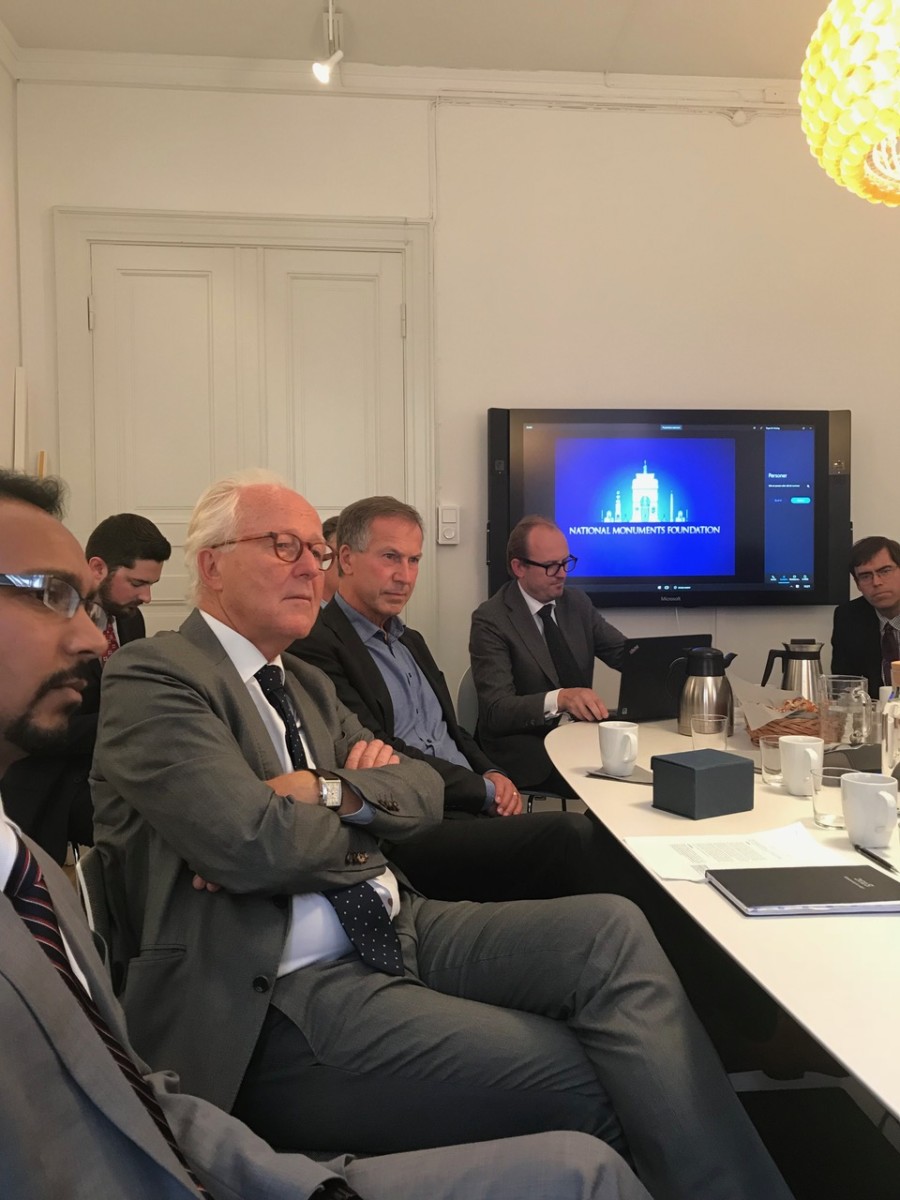 Atlanta’s quest to hold the World Summit of Nobel Peace Laureates in 2020 took a major step forward during a recent visit by an Atlanta delegation to Oslo, Stockholm and Paris to meet with Nobel leaders. 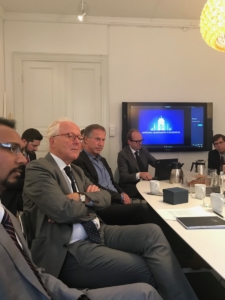 “The trip was sensational,” said an exuberant Bob Hope, a public relations professional who has been leading Atlanta’s Nobel Peace Summit effort. “There was not a dissenting voice from anyone.”The week-long trip (from Aug. 28 to Sept. 5) served as a way for Atlanta leaders to build relationships with the multiple organizations that play a role with the Nobel Peace Prize.

The first stop was in Oslo, where the group met with the Norwegian Nobel Committee, which is the home for the Peace Prize. Every year, the Nobel Peace Prize is given at a ceremony at Oslo’s City Hall.

The group met with Olav Njolstad, who serves as secretary of the Norwegian Nobel Committee. Njolstad also joined the Atlanta delegation on a trip to Stockholm to meet with the leaders of the Nobel Foundation, which awards all the Nobel prizes. 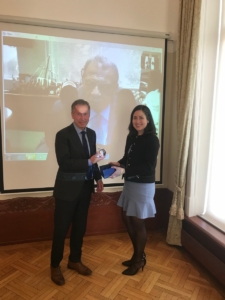 Vanessa Ibarra of the City of Atlanta presents a crystal peach to the Nobel Committee’s Olav Njolstad. Mayor Andrew Young is skyped in the background (Photo by Bob Hope)

In Stockholm, the group met with Lars Heikensten, executive director of the Nobel Foundation, and Mattias Fyrenius, CEO of Nobel Media AB, which is entrusted to manage the media rights connected to the Nobel Prize.

They also met with Olov Amelin, the director of the Nobel Museum, and they were able to tour the museum.

“We told them we were on a good will mission,” Hope said. “We told them about Atlanta and what we are trying to do.”

At both stops, Vanessa Ibarra, the director of international affairs and trade for the City of Atlanta, presented the host leaders with a crystal peach on behalf of Mayor Keisha Lance Bottoms. Former Atlanta Mayor Andrew Young also was skyped in so he could participate in the meetings.

In addition to Hope, the delegation included:

“Rotary is going to help us produce the event along with the Atlanta host committee,” Hope said. “Rotary is the largest membership organization in the world that has peace as part of its mission.”

The trip ended in Paris to have dinner with Ekaterina Zagladina, president of the Permanent Secretariat of the World Summit of Nobel Peace Laureates. And she brought along a couple of her associates as well as Ashley Woods, who is curating the Martin Luther King Jr. exhibition that is opening up at the Nobel Museum in Stockholm on Sept. 28.

“It was all positive,” Hope said. “They all bought into the fact that they needed to refresh the Nobel brand.”

As Hope has said before, there’s a real opportunity for Atlanta to partner with Nobel to promote its unique role as a center of civil and human rights as well as for peace.

“Atlanta can become the Davos of Peace,” Hope said, referring to the annual economic summit in Davos, Switzerland.

“SunTrust and Grady are committed to advancing the well-being of others in the communities we serve,” said Stan Little, head of corporate philanthropy at SunTrust Bank. “We’re pleased that our financial support will help families get the medical care they need to ensure their ongoing health.”

The campaign was launched last year as a joint public-private partnership. It will fund two specific projects: a new Center for Advanced Surgical Services on Grady’s main campus that will increase the hospital’s capacity for inpatient and outpatient care, and the expansion of the Ponce Center for HIV/AIDS to better serve patients and conduct more of the cutting-edge research needed to end a growing epidemic.

“We are grateful for this generous gift, which will allow Grady to change and save the lives of even more patients,” said Renay Blumenthal, president of Grady Health Foundation. “SunTrust has a long history of supporting Grady financially, through volunteerism, and even championing our recent cycling fundraiser, VeloCity. This is just another example of how the bank makes an incredible impact on the health and financial welfare of the communities it serves.”

Blumenthal added that the gift will go towards a goal of $90 million from private philanthropy. “So far, we’ve almost reached our goal and have more community interest to help us exceed it,” she said.

“Grady is a critical Atlanta institution that has grown with our community just as SunTrust has,” said Jenna Kelly, chairman of the SunTrust Bank Trusteed Foundations. “We appreciate the important role it plays in responding, improving and delivering exceptional care to our community.”

For 40 years, Atlanta-based Southface has been the local leader promoting sustainability — energy and water conservation — in our built environment.

On Wednesday, Sept. 12, Southface held its annual Visionary Dinner to celebrate its four decades. The event was held at Flourish, in Buckhead. The dinner featured a discussion about social equity in the built environment.

The panel included Jeff Tiller, one of the founders of Southface, who helped steer the organization during its early years and continues to work on the growth of energy efficiency, renewable energy and sustainable buildings; and Odetta MacLeish-White, managing director of the Transformation Alliance, a partnership dedicated to creating mixed-income communities anchored by equitable transit-oriented development.

Franklin currently chairs the executive board of Purpose Built Communities, a nonprofit consulting firm that works side-by-side local leaders across the nation to plan and implement a holistic neighborhood revitalization effort.

She was the elected as the first African-American woman mayor of a major Southern city in 2002. She served two four-year terms as mayor.

The topic is especially timely this year with Hurricane Florence expected to hit the coasts of North Carolina, South Carolina and Georgia on Friday, Sept. 14 and the weekend. The Summit will explore how Hurricane Maria devastated Puerto Rico a year ago as well as look at how we responded to Hurricane Florence.

Experts will discuss disaster preparedness, emergency response and how communities can build health resilience given the deadly impact natural disasters can have.

Among the participants who have confirmed are:

Previous Article
How the world’s biggest airport got its new leader
Next Article
Column: Andrew Young’s love song for Atlanta, past, present and future