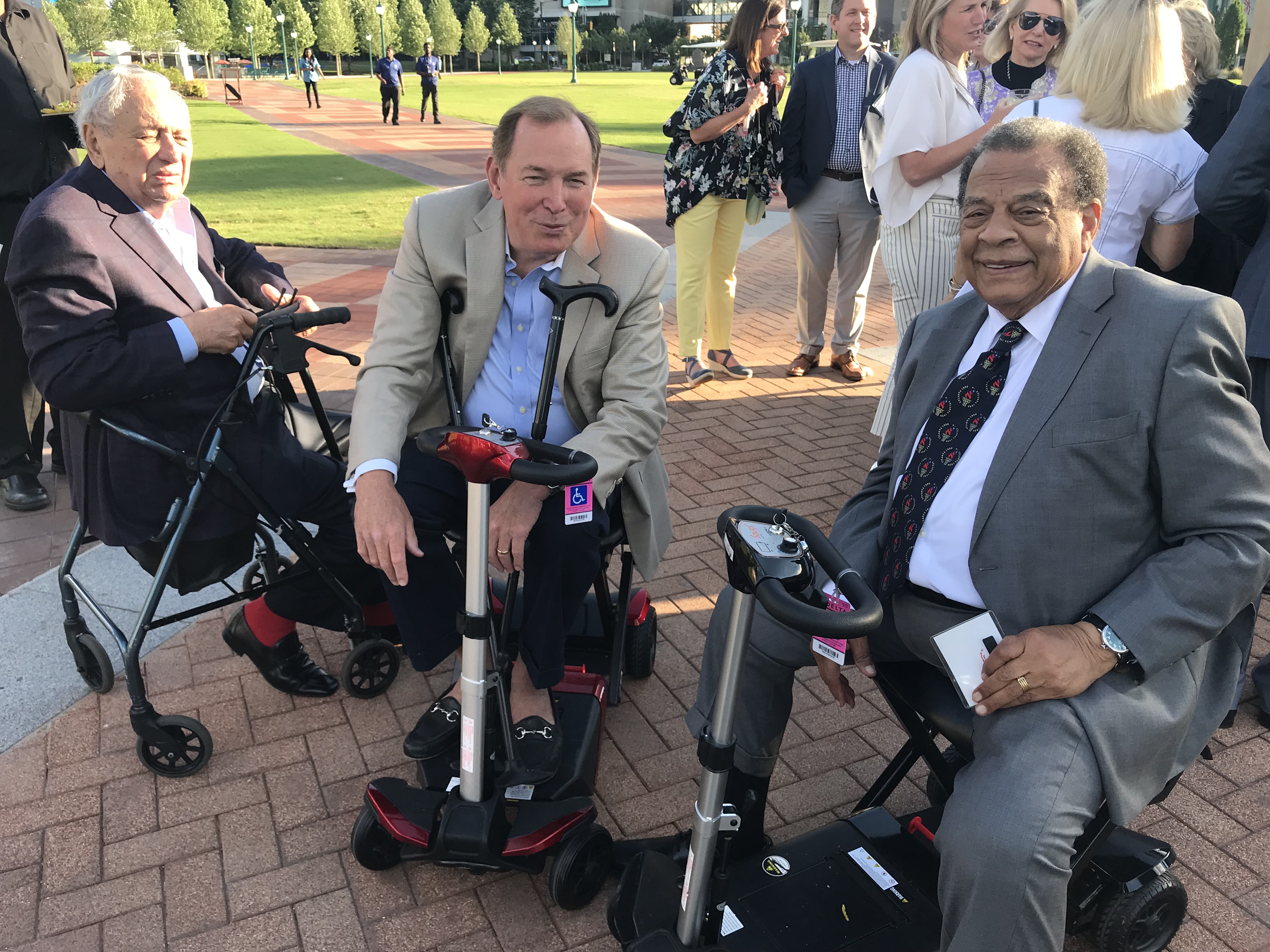 By Maria Saporta
As published in the Atlanta Business Chronicle on May 17, 2019

A May 13 event to celebrate the new and improved Centennial Olympic Park turned into a reunion of the leaders who helped Atlanta win the 1996 Summer Olympic Games.

The purpose of the elegant reception and dinner was to thank the 29 donors who gave a total of $27 million to “Legacy of Dreams” campaign – an effort launched during the park’s 20th anniversary to revitalize and improve features in Centennial Olympic Park. 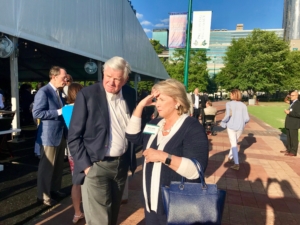 Billy Payne, who led the effort to bring the Games to Atlanta, served as the dinner’s emcee – thanking all the people who were behind bringing the Olympics to Atlanta and supported the development of the park.

Nearly all the members of the “original nine” – the “risk takers” who bought into Payne’s Olympic dream – attended or were represented. They included: Horace Sibley, Charlie Battle, Linda Stephenson, Cindy Fowler, Tim Christian and Peter Candler. The late Bobby Rearden was represented by his wife, Dell Reardon. Harriett Shaffer represented her husband, Charlie Shaffer, who is in a medical care facility. The one person missing or the original nine was Ginger Watkins, who eventually served as managing director of the Atlanta Committee for the Olympic Games.

The event also was attended by Andrew Young and Robert Holder, who both served as co-chairs of the Atlanta Committee for the Olympic Games.

“Thanks to the Centennial Olympic Games, we are truly an international city,” Young said at the dinner.

Young said Payne got the idea to build the park by staring out his office window on what was then “a really raggedy collection of warehouses and buildings with no redeeming value.” 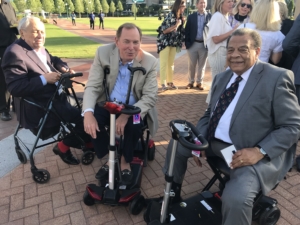 He was able to convince the state’s Georgia World Congress Center Authority and major corporations and foundations – notably the Robert W. Woodruff Foundation – to buy into the idea.

“If it were not for the Woodruff Foundation, this park would never have been built,” Payne said.

McTier said one person who deserved a great deal of the credit was Ray Crawford, the late head of the Georgia State Properties Commission, which was able to acquire much of the land for the park.

The dinner also included representatives of the families of former Mayor Ivan Allen Jr. and his late son, Ivan Allen III; as well as family members of the late Bennett Brown, a banker and early believer.

“I think our park is more beautiful than ever,” Payne said. “Tonight is a celebration of your kindness and your generosity.”

Among the new and improved elements in the park include:

The Fountain of the Rings Plaza – A raised Andrew Young International Boulevard to plaza level creates an engaging pedestrian corridor from the hotel district to GWCC. The Spectacular is a new feature that greets visitors at Centennial Olympic Park Dr.

Paralympic Plaza – A new entrance and green space honors the athletes who participated in the 1996 Atlanta Paralympic Games.

Southern Company Amphitheater – Upgrades to the existing amphitheater give the park additional flexibility to host a variety of activities and events. It comfortably seats about 1,200 people.

Unity Plaza – A water feature extending from Centennial Olympic Park Drive to Baker Street creates a new entry point for guests. The Androgyne Planet sculpture, a gift from Atlanta’s Cultural Olympiad to the state of Georgia, represents the Game’s continuity and spirit of international unity.

West Lawn Promenade – This showcases the Park’s ties to the Centennial Olympic Games with a new medal podium on the site of the former Metro Atlanta Chamber building.

The improvements also included granite from each of the five continents represented in the Olympic Games is used in the Park. Since 1996, economic development around the park has totaled $2.3 billion.

“Centennial Olympic Park stands as our greatest tangible legacy of the Olympic Games,” said Hardin, who added that the center of downtown has now shifted from Five Points to the park – formerly a “derelict” area.

“We all like to remember the fellowship in this park,” recalled Young, who briefly referenced the park bombing during the Games. “It wasn’t all glory, but it all came out as a glorious triumph.”

Three years ago, the founder of PulteGroup – William J. “Bill” Pulte – was at odds with his hand-picked successor – Richard Dugas.

At the time, Pulte’s grandson, also named Bill Pulte, vocalized the founder’s disagreements with management – including the decision to move the Fortune 500 company’s headquarters from Detroit to Atlanta. But much can change in three years. In April 4, 2016, Dugas announced his intention to give step down as CEO within the year. On Sept. 6, 2016, the company named Ryan Marshall, then the homebuilder’s president, the new CEO. 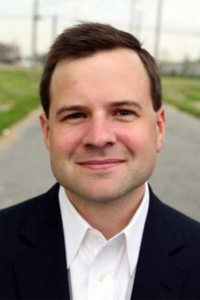 “That’s the same day that I joined the company as a board member,” the younger Bill Pulte said at PulteGroup’s annual meeting on May 8.

Before sitting down for a quick interview after the meeting, Pulte asked Marshall for permission to speak to a reporter.

“When I joined the board I had to sign an agreement,” explained Pulte, who is now on the inside rather than a critic on the outside. And he’s much more content. “I think we are headed in the right direction,” Pulte said of the company. “Things are going well. I’m glad that we got on the same page, and I’m looking forward to the future.”

Sadly, Pulte said his grandfather passed away March 7, 2018, adding, “He was a class act.”

And Pulte also now is pleased PulteGroup is headquartered in Atlanta. “I’m very happy with Atlanta,” Pulte said. “It’s a great city and a vibrant place for commerce. I’m proud we are based in Atlanta.” Meanwhile, Marshall gave shareholders an upbeat report.

“We had a phenomenal year in 2018,” Marshall said of the nation’s third-largest home builder with 5,000 employees. It has been able to reduce the amount of land that it owns, and it has invested more than $10 billing since 2015. “We are thrilled with how the company performed in 2018.”

Back in 2011, Aaron’s Inc. had no women on its board. Today it has three women directors on its nine-member board. The newest is Kelly Barrett, most recently a senior vice president of the Home Depot (NYSE: HD) and a former chief financial officer of Cousins Properties (NYSE: CUZ). Barret also is chair of the Metro Atlanta YMCA and is involved with several other nonprofits.

“Kelly’s strong background in public company operations, finance, audit and compliance will be a tremendous asset to the board as it carries out its oversight responsibilities,” said Ray Robinson, Aaron’s board chairman. “Her record of giving back to the community aligns well with the Aaron’s culture.

“The other two women on Aaron’s board are: Cynthia Day, president and CEO of Citizens Trust Bank, became a director in October, 2011; and Kathy Betty, former owner and CEO of the Atlanta Dream, joined the board in August 2012.

Virginia Hepner, the retired CEO of the Woodruff Arts Center, transitioned from State Bank’s board to Cadence after the merger.

On March 7, the bank holding company announced the appointment of Precious Williams Owodumni, president of Houston-based Mountaintop Consulting LLC, to its board. She also was a former vice president of New York-based Goldman Sachs & Co. 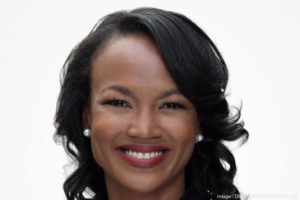 Then on May 8, Kathy Waller, the former chief financial officer of the Coca-Cola Co., was elected to the company’s board at its annual meeting. That fulfills a pledge that bank leaders made in December after speaking to the Rotary Club of Atlanta.

“We are definitely moving toward more ethnic and gender diversity on our board,” said Paul Murphy, the holding company’s chairman and CEO, said at the time.

Sam Tortorici, CEO of Cadence Bank; and Joseph Evans, vice chairman of Cadence and the former CEO of State Bank & Trust, agreed. (State Bank almost always had at least three women on its board).

“These are three incredibly accomplished women,” Evans wrote in an email sharing the news about Waller joining the board. “She is the third female added to the board since our Jan. 1 close and the second African-American. I am pleased with the speed with which this has been addressed and extremely pleased with the individuals we were able to attract. I’m a believer!”