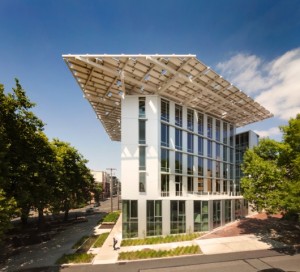 By Maria Saporta
As published in the Atlanta Business Chronicle on October 30, 2015.

For starters, the university is moving forward with its Living Building Challenge to develop a building on its campus that would use a net zero of energy and a net zero of water.

The project is the dream of the Kendeda Fund, which provided a $30 million grant for the Living Building Challenge 3.0 — a venture that will become a research and educational center for the campus. 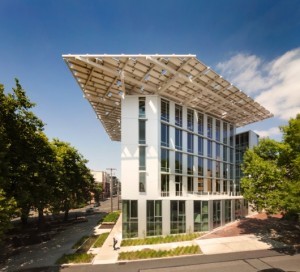 The Bullitt Center in Seattle gave the Kendeda Fund’s Diana Blank the inspiration to provide the funding for a “Living Building” at Georgia Tech (Special: Photo by Nic Lehoux)

The RFQ and RFP stated that the building alone would cost an estimated $18.6 million and would have 42,500 square feet of space. The solicitation packages for the project are due Nov. 12.

Georgia Tech would then evaluate the proposals and issue notifications to the semifinalists by Nov. 20. The plan calls for design professionals to be selected and ready to start work on the building’s construction documents by March 2016. And the goal is to have the building open by the middle of 2017.

The Kendeda Fund wanted to have a Living Building in Atlanta — one that would meet the most stringent green building certification process that exists. It found Georgia Tech to be a willing partner to build what could be the most environmentally sustainable building in the Southeast.

The Scheller College of Business recently was ranked first in the nation and sixth globally by the Corporate Knights’ Better World MBA. It is the definitive ranking of evaluating MBA programs that are doing the best job preparing students to tackle social and environmental challenges.

“Globally we went from not ranked, to 29, to 8, and to 6 globally over the last three years,” said Beril Totkay, faculty director of Scheller’s Ray C. Anderson Center for Sustainable Business. She credited the Kendeda Fund and the Ray C. Anderson Foundation for helping provide support to the institution and for being able to improve its rankings.

The top five ranked business schools in the world were those at York University and McGill University (ranked 1 and 2 respectively and both in Canada); followed by Copehenhagen Business School in Denmark; KAIST in South Korea; and University of Calgary in Canada.

Agnes Scott College and the environment

Agnes Scott hosted presidents from universities across the U.S. to sign the new Climate Leadership Commitment from the nonprofit Second Nature on Oct. 5. It is a significantly higher bar to meet than the American College and University Presidents Climate Commitment that 700 institutions have signed on to since 2007.

Agnes Scott President Elizabeth Kiss acknowledged it’s easier for a private institution to sign such an agreement. “There is a certain freedom for private colleges to speak up,” she said.

Cox Enterprises signed the American Business Act on Climate Pledge on Oct. 19 — committing to send zero waste to landfills by 2024 and to be water and carbon neutral by 2044.

“As the environment we live in and work in is threatened, the culture of our company is to do something, not debate, not procrastinate, but get out and really do something about it,” said Cox Enterprises Chairman Jim Kennedy in a statement.    “The legacy I want people to understand is that it’s what you do rather than what you say.”