By Maria Saporta
As published in the Atlanta Business Chronicle on April 29, 2016

Global Ministries, the philanthropic arm of the United Methodist Church, has received a $1.5 million grant from the Robert W. Woodruff Foundation to move its headquarters from New York to Atlanta.

Thomas Kemper, general secretary of Global Ministries, said in a telephone conversation April 26 the organization has already started moving people to Atlanta. The move should be completed by October when a total of 168 staff members will be located in Atlanta. About 40 percent of them will be moving here from New York. 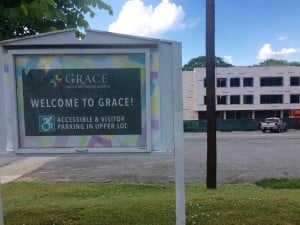 Global Ministries has worked out a partnership to co-locate with Grace United Methodist Church at the corner of Ponce de Leon Avenue and Charles Allen Drive. A building for the global nonprofit is being reconstructed for the headquarters.

“It is a unique opportunity to bring global and local together,” Kemper said. “The church will continue there, so we have a great opportunity to be ‘glocal.’ We really hope that our presence is not just an office there but to be a spiritual presence in Atlanta and Midtown.”

“The welcome we have received in Atlanta is overwhelming,” said Kemper, adding that the Bishop Mike Watson and members of the United Methodist Church in the area have partnered with the individual families moving to Atlanta to make sure they have a smooth transition.

The move is historic for the organization, which has been based in New York City since 1819. “It’s quite a big step really,” Kemper said. Global Ministries has been at its current location on Riverside Drive for 55 years.

Global Ministries, which receives annual contributions of about $60 million, is involved in four main focus areas: global health and fighting poverty; seeking new places and people for its missions; development of new leadership; and ministry with the poor.

The presence of several global health and development organizations in Atlanta was a major draw. “The other one is the international airport,” Kemper said. “As we move to Atlanta, we also are creating regional offices in Latin America (Buenos Aires), Seoul and one in French-speaking Africa. Atlanta is a place where you can fly everywhere.”

Then Kemper acknowledged that another reason for moving was financial. It is hard to live in New York on church-based salaries.

“The cost of living is so much lower in Atlanta,” said Kemper, who is planning to move to Atlanta in the next several months, and jokingly added: “It’s all my fault we’re moving, so I’m moving too.”

Fortune 500 company Genuine Parts’ April 25 annual meeting was the last at its longtime headquarters on Circle 75 Parkway. Genuine Parts has sold the building to the Atlanta Braves, which is building the new SunTrust Park next door, and is moving to a new building nearby. 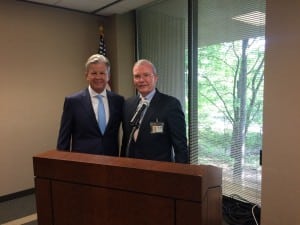 “We are pretty close to completion of our new building,” said Thomas Gallagher, chairman and CEO of Genuine Parts, who added that it will be part of a campus with one of the company’s existing buildings.

“This building has served us very well over the last 45 years, and we hope the new building will serve us well for the next 45 years,” Gallagher said. “If not, it will be someone else’s problem.”

What he failed to mention was that Genuine Parts would announce later that afternoon that Gallagher, 68, is stepping down as CEO, and his successor will be Paul Donahue, 59, who has served as president of the company since 2012.

Donahue now is only the fifth CEO that Genuine Parts has had in its 88-year history.

At the meeting were two of the company’s former CEOs — Wilton Looney and Larry Prince — who both serve on Genuine Parts “emerti” board. Gallagher remarked that the emeriti board’s 14 members now outnumber the regular board, which has 13 members — including four women, but no director of color.

The only shareholder comment at the end of the meeting came from Looney who gave as upbeat a talk as he could to the executives for performing as well as they did during a challenging year. He also thanked them for the 60 years of consecutive dividend increases.

Looney was CEO when the current headquarters building was built.

“We hate to leave this area and this building,” Looney told his fellow shareholders. “It’s been an awfully good location for us.”

As he was leaving the meeting to join the other directors, Looney said he has a hard time believing he is 97. “I keep trying to catch up to my age,” Looney said.

When Coca-Cola Enterprises held its annual meeting on April 26 at the Cobb Energy Centre, CEO John Brock ran the meeting in his normal no-nonsense style. But it was in response to a shareholder question when Brock observed that it likely would be the last CCE annual meeting ever. 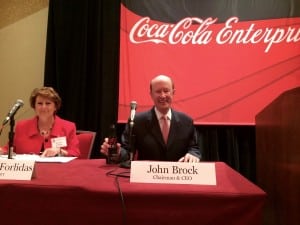 John Brock, CEO of Coca-Cola Enterprises, at what could be the last annual meeting of the bottler (Photo by Maria Saporta)

CCE is merging with two other European bottlers (in Germany and Portugal/Spain) to become Coca-Cola European Partners (CCEP). The headquarters of the new company will be in London — if CCE shareowners approve the merger at a meeting scheduled for May 24.

“It’s the end of an era and the beginning of a new one,” Brock said after the meeting was over. The night before, the directors had an opportunity to say good-bye to the three directors who will not be joining the CCEP board. They are Cal Darden, a retired executive with United Parcel Service; Andrea Saia, formerly the global head of the Alcon Division of Novartis AG; and Phoebe Wood, a principal at CompaniesWood. CCE has had one of the most diverse boards in Georgia.

Brock said the company also is saying good-bye to four executives, who will be leaving at the end of the year.

Phil Humann, retired CEO of SunTrust Banks who has been on the CCE board since 1992, called the merger “a great opportunity for the company.”

When asked how he felt about Atlanta losing CCE as a Fortune 500 company, Humann said: “That’s just a business reality of being a European company.”