By Maria Saporta
Published in the Atlanta Business Chronicle on September 26, 2014

Although it still needs to raise another $3.2 million by the end of the year, the Ronald McDonald House Charities will break ground on Sept. 30 on its new – bigger and better – Peachtree Dunwoody Road House.

The charity already has raised $15.3 million of its $18.5 million campaign for the new house that will better serve families with children being treated at Children’s Healthcare of Atlanta at Scottish Rite. The new house will replace an 11-bedroom home with one that is nearly triple its size with 31 bedrooms.

“Now that we’ve entered the public phase of the campaign, this is when you have to roll up your sleeves,” said Javier Goizueta, president of the McDonald’s division for The Coca-Cola Co., who is chairman of the campaign for the Atlanta Ronald McDonald House Charities.

For Goizueta, fundraising was outside his comfort zone.

“I’m not a big fan of asking for money,” he said. “I don’t like knocking on doors asking for money. I took this on because this charity is so special to me. Long after I leave Coke, I plan to stay connected with the Ronald McDonald House.”

Beth Howell, president and CEO of the nonprofit, said the smaller Peachtree Dunwoody home has had to turn away about 650 families in the last three years because it did not have enough rooms.

The Ronald McDonald House provides temporary housing and support services to families of children receiving life-saving medical care at nearby hospitals. As Children’s Healthcare of Atlanta has grown, the two Ronald McDonald houses operate at nearly full capacity every night.

While the new house is under construction, families will be housed at the Ronald McDonald House on Gatewood Road near the Emory campus and at nearby hotels. The Gatewood House, which serves Children’s Healthcare at Egleston, replaced a 16-bedroom house with a 50-bedroom facility, which opened in 2008.

Howell said that although they had not completed their fundraising campaign, the decision was made to start construction this month so they could take advantage from locked-in building contracts. If they didn’t start construction, then they were concerned prices would escalate because of all the building that is underway in the Atlanta market.

The Ronald McDonald charity also has another motivation.

The Robert W. Woodruff Foundation has made a $2.5 million gift that is “payable only when they have raised all the necessary dollars,” and that must be raised by the end of the year, according to Russ Hardin, president of the foundation. “The Atlanta Ronald McDonald House is a godsend to families who come to Atlanta for their children’s care. And it is the gold standard in corporate philanthropy.” 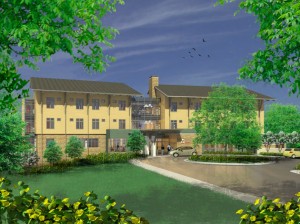 For Howell, that means they will need to raise the $3.2 million by Dec. 31 in order to receive that $2.5 million grant.

“We’ve got a plan, and we’ve just got to work it,” Goizueta said. “We’ve got the capital campaign committee. And we have got probably a dozen or so appointments [with potential major donors] still left for October and November.”

Howell added that it also has about $1.2 million in pending grant applications to foundations.

Every year, the two houses serve about 1,975 to 2,000 families. They stay an average of 10 to 25 days, depending on the medical issues involved.

The goal will be to open the new Peachtree Dunwoody home by December 2015.

Two of Atlanta’s most prominent executives were inducted into Georgia State University’s Business Hall of Fame Sept. 18 at an elegant dinner at The St. Regis Hotel.

The GSU J. Mack Robinson College of Business inducted Dr. Helene Gayle, CEO of CARE; and Muhtar Kent, CEO of The Coca-Cola Co. It was a nice touch that Gayle serves on Coca-Cola’s board of directors. (See photos in The Insider, page 8A.)

Introducing Gayle was Dr. William Foege, a superstar in his own right. As a former director of the CDC and The Carter Center, founder of the Task Force for Global Health and a senior health adviser for the Bill and Melinda Gates Foundation, Foege, who has followed Gayle’s career at the CDC and the Gates Foundation, said she has understood the relationship between poverty and public health.

In a video about Gayle before she accepted her honor, Bono – the lead singer of U2 – actually referred to Gayle as “my queen.”

“Wow, it’s pretty overwhelming to see one’s life flash like that before you,” Gayle said after seeing the video of her from when she was a little girl to present day. “Ending extreme poverty is a realistic goal in our lifetime.”

She went on to dedicate her the honor to her late father – Jacob Gayle, a small business owner from Buffalo, N.Y.

Introducing Kent was Grace Lee, one of the students who participated in the 2012 Global Shapers at the World Economic Forum, a program supported by Coca-Cola.

She thanked Kent and the company for its support of Global Shapers, and she added: “We need more people who are passionate about what they do.”

In return, Kent said the program was about getting the “best and brightest young people solving the world’s most pressing problems.”

In accepting his award, Kent remembered several previous honorees in the Hall — Ingrid Saunders Jones, Neville Isdell, Roberto Goizueta and the recently departed Truett Cathy, who Kent called “an extraordinary businessman and an even better human being.”

Coca-Cola’s CEO also paid special tribute to the late J. Mack Robinson, the namesake of the business college, “who left behind an incredible legacy,” Kent said. “He was also part of the Coca-Cola family as a dear friend of Robert Woodruff.”

Previous Article
How to find and hike Atlanta’s hidden forests
Next Article
We’re back and welcome United Way of Greater Atlanta!