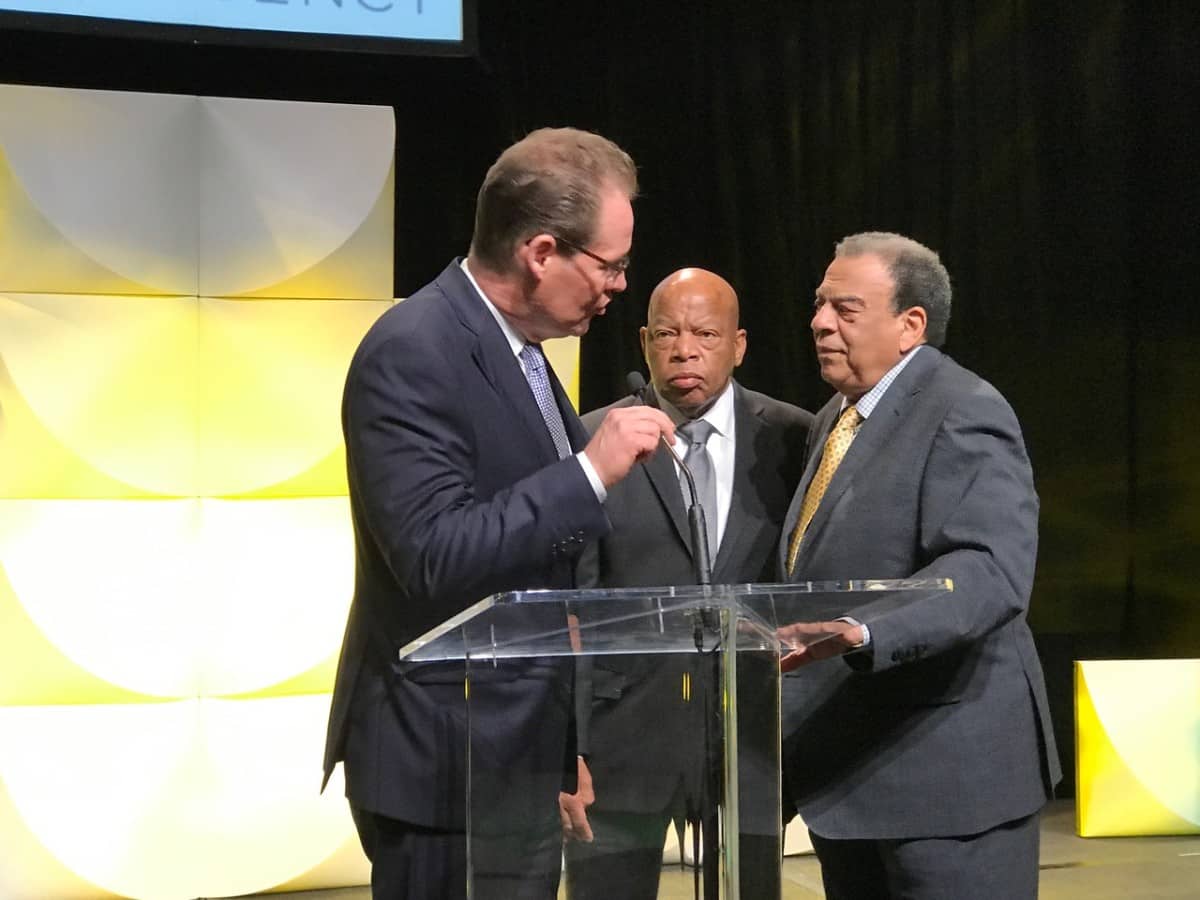 By Maria Saporta
As published in the Atlanta Business Chronicle on Feb. 24, 2017

The Hyatt Regency Atlanta, which will celebrate its 50th anniversary in May, honored Congressman John Lewis at its annual Heritage Celebration on Feb. 20.

Peter McMahon, the Hyatt’s general manager, said it was an opportunity to “honor a living legend” on the eve of his Feb. 21 birthday. 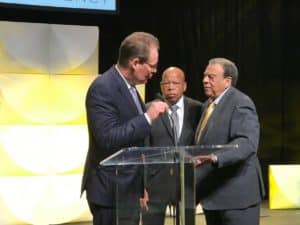 Lewis was introduced by former Atlanta Mayor Andrew Young, who had worked alongside of Lewis during the Civil Rights movement. Young remembered the attitude of the movement as way “to love the hell out of all the hatred and anxiety and fear of our native land.” And then Young added: “In fact we are right in the middle of another war,” but he has no doubt it will turn out okay.

“John, he might not know what the future holds, but he knows who holds the future,” Young said. “They want to make you a saint, and you are, but you don’t need to know it.”

Lewis said he was deeply honored to be recognized by the Hyatt. “I remembered coming to this place when this first opened,” said Lewis, remembering a meeting in August 1967 with Martin Luther King Jr. where singer Aretha Franklinperformed. The Hyatt began its Heritage Celebration in 2003.

Character, civility and pluralism were the prevailing themes Feb. 21, when the Trinity Forum – an organization seeking to help transform society through leaders – held its inaugural event in Atlanta.

New York Times columnist David Brooks and former Morehouse College President Robert Franklin led the conservation that aimed to get Atlanta’s leaders to focus on the “big questions” facing the city and the nation at a time of civic fracture and polarization. 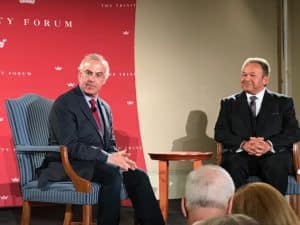 Brooks, who recently wrote a best-selling book “The Road to Character,” talked about community healers – people who break down walls that divide us and develop intimate and meaningful relationships with the people in their midst. “There are healers everywhere,” said Brooks, who traveled the country trying to understand the support of Donald Trump, someone he thought would never win the Republican nomination, much less the presidency.

“We are suffering from a crisis of intimacy and trust,” said Brooks, adding there’s a decline in marriages and friendships and an epic rise in loneliness, partly because people have become detached through technology. “We are in a new political debate. It is not big versus small government. It’s open versus closed.”

Franklin, who is now with Emory University, brought the conversation home to Atlanta, a city that has had several renewals – always seeking to become a better city. “This room is filled with community healers,” Franklin said – heralding the Atlanta Friendship Initiative for bringing people together.

More than 300 people attended the program at the Atlanta History Center, and everyone received Martin Luther King’s “Letter from Birmingham Jail.”