By Maria Saporta
As published in the Atlanta Business Chronicle on Nov. 25, 2016

The Metro Atlanta Chamber, which will hold its 157th annual meeting Nov. 30 at the Hyatt Regency Atlanta, is unveiling its new strategic pillars as well as its 2017 leaders.

A special focus will be in marketing the Atlanta region in a new way. “With the South, there are some misperceptions,” said Hala Moddelmog, the chamber’s president and CEO. “Some people see Atlanta as a giant parking lot with shopping malls. Instead of trying to combat negative messages, we are going to put forth the positive messages that we have.” 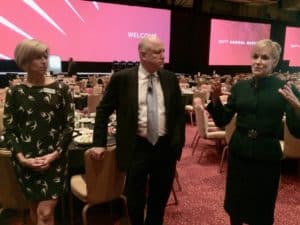 Moddelmog said that includes how Atlanta is becoming the digital destination of choice for top companies like GE and Honeywell; how Atlanta offers a wide diversity of lifestyles — from walkable urban communities to suburban horse farms; and how Atlanta has emerged as a center for global health.

“We are trying to define Atlanta on a global stage,” she said.

To help accomplish that goal, the chamber has hired Deisha Barnett as its new senior vice president of marketing and communications. Barnett spent the last nine years with Walmart and was its senior director of corporate communications.

Barnett first visited Atlanta when she was in high school looking at colleges.

“I was in love with Atlanta from the first day,” said Barnett, who ended up going to Clark Atlanta University. “There was an energy in Atlanta that made it magnetic. The great deep history that’s here, particularly for an African-American to be so close to the movement, that changed my life.”

Barnett, who will start with the chamber Nov. 29, said she will try to bring additional diversity of thought to the leadership team and help promote the city to the rest of the world.

“It’s a great opportunity for me to give back to a place that I love,” Barnett said.

“It’s absolutely critical to everything we are trying to do that we are seen as a welcoming community,” Moddelmog said.

In addition to Wood, Sprecher and Moddelmog, the other speakers at the annual meeting will be Glenn Lurie, 2018 MAC chair-elect who is also president and CEO of AT&T Mobility and Consumer Operations; Mayor Kasim Reed; Home Depot CFO Carol Tomé, and Russel Stokes, who is president and CEO at GE Energy Connections.

In the past 25 years, ARCS has raised and awarded $4.5 million in scholarships to more than 450 scholars at Georgia Tech, Emory, the University of Georgia and Morehouse College. The all-woman organization that stands for Achievement Rewards for College Scientists, celebrated its 25th anniversary in Atlanta during a luncheon at The Ritz-Carlton downtown Nov. 17, when they awarded 50 STEM scholars at the four universities — granting a total of $370,000.

The national women’s organization was founded in 1958 in response to the Sputnik launch, and ARCS’ 16 chapters have awarded more than $100 million.

The featured speaker was Deborah Kilpatrick, who was one of three recipients the first year Atlanta awarded scholarships. Kilpatrick, now CEO of Evidation Health, said becoming an ARCS scholar allowed her to concentrate on her research at Georgia Tech. She thanked the organization for taking a chance on her, and said how important it is for women and minorities to see the opportunities of a STEM education at an early age.

Morgan, who served as CEO of the Winston-Salem, N.C., company from January 2008 until June 2014, brought words of inspiration to the hundreds of business leaders in the room, including the founder of the breakfast Frank Skinner.

As CEO he knew the company had to be about more than selling doughnuts, so the company adopted the mission “to touch and enhance lives through the joy that is Krispy Kreme.”

Morgan said that as you go through life, few people remember what you said or even what you did. “They’ll remember how you made them feel,” he said, adding that we all needed to walk more slowly through life and bow more often.