By Maria Saporta
Published in the Atlanta Business Chronicle on Friday, June 21, 2013

As Jonathan Reckford and Michael Polk hammered a window into a Habitat home under construction in the Glenrose Heights neighborhood in south Atlanta on June 19, they also were sealing the beginning of a new global partnership.

Polk, CEO of Atlanta-based Newell Rubbermaid Inc., launched its first-ever Global Day of Service on June 19 with the help of 1,200 employee volunteers working at 73 different sites in 21 countries.

Just as significantly, Polk also announced a two-year, $1 million partnership with Atlanta-based Habitat for Humanity International to help build homes for people in need of shelter around the world.

“We are so delighted to be expanding the partnership with Newell Rubbermaid across the globe,” said Habitat CEO Reckford, who added that it’s always better when a company’s business interests are closely aligned with its philanthropic initiatives. “The best partnerships allow companies to do well and do good.” 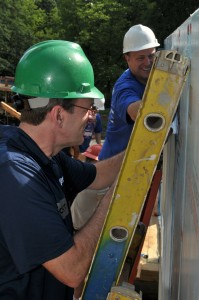 Polk clearly was excited by the new alliance with Habitat International, and he gave credit to Jackie Parker, president of the Newell Rubbermaid Foundation for putting together the Global Day of Service and the Habitat partnership.

“Habitat is not new to us,” Parker said. “But it had been a build here and build there.”

Newell Rubbermaid had worked with local affiliates of the organization, but this is the first venture with an international nonprofit.

“This is a perfect fit for our portfolio,” Polk said. “There’s a great fit for Habitat and our brands.” Polk went on to recite all the tools and products for the home that are part of the Newell Rubbermaid family.

“This is also a way for us to reach across the world to come together behind one social program as our company becomes more global,” Polk said. “We have been trying to find a way to scale our social commitment.”

Polk said that employees had started building homes in Malaysia, China, India and Australia the evening before, and they had been tweeting enthusiastically about their experiences. Polk did not hide his excitement about the potential of the Habitat partnership.

“This is a good start,” he said. “But there’s more that we can do. How can we leverage our two brands together? This allows us to have a more profound impact across a broader geography.”

All of that is welcome news for Reckford. Habitat has provided 600,000 homes that are providing shelter for about 3 million people around the world. But that’s only meeting a fraction of the need.

Meanwhile, more than a dozen Newell Rubbermaid employees were busy building the Atlanta Habitat home on Glenrose Circle where Tanika Pitts, a single mom, will soon be living with her two children.

Former Atlanta Mayor Shirley Franklin has been asked by Paul Volcker, former chairman of the Federal Reserve Bank, to serve on his new nonpartisan initiative — the Volcker Alliance. Volcker has established the alliance in an attempt to help rebuild public trust in government and to have more effective execution of public policies.

“Trust in American government has been declining for decades, and similar attitudes are evident in other democracies,” Volcker said in a statement. The board of the Alliance consists of former public servants, Democrats and Republicans, from federal, state and local governments. The president of the Alliance is Shelley Metzenbaum, a former White House Management and Budget official.

The Atlanta Bicycle Coalition not only has a new home, but now it also has some spending money to help deck out its new offices.

The Coalition has won a $10,000 grant from IKEA in products, services and in-kind donations as it moves its offices from downtown to Cabbagetown. IKEA workers selected the Coalition along with other organizations to compete in an online contest for the $10,000 prize.

The public is invited to tour the new space at 692 Kirkwood Ave. on June 27.

The one-day event will provide a “one stop array of resources” intended to lower barriers to employment and help house the homeless.

It is part of the region’s efforts to end chronic homelessness.

Six young Jewish nonprofit entrepreneurs presented their ideas to three “sharks” as part of the Atlanta Jewish community’s version of the show “Shark Tank” held on June 6 at the Selig Center.

The sharks were Bernie Marcus,co-founder of The Home Depot Inc. and father of the Georgia Aquarium; Laurie Ann Goldman, CEO of Spanx; and Michael Kogon, CEO and founder of Definition 6.

The grand winner was Chaim Neiditch of the Jewish Student Union, who is setting up clubs across metro Atlanta.

Previous Article
It may not be broken, new report says of the way needy, rural Georgians are transported to critical destinations
Next Article
Atlanta attorney Beth Chandler named as new general counsel of Rollins Inc.