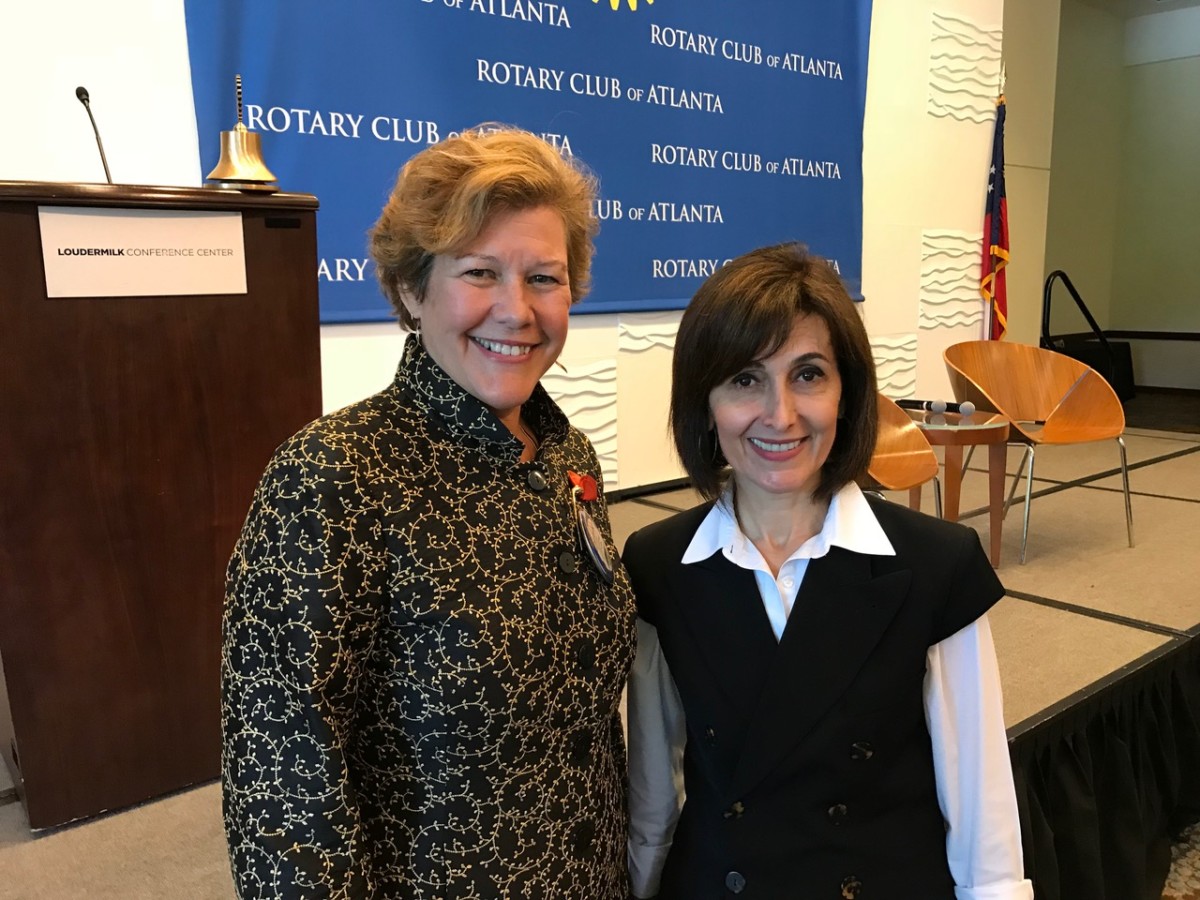 Martha Brooks, an Atlanta Rotarian who chairs CARE’s board, with Dina Kawar, Jordan’s ambassador to the United States, at the Rotary Club of Atlanta on June 4 (Photo by Maria Saporta)

By Maria Saporta
As published in the Atlanta Business Chronicle on June 8, 2018 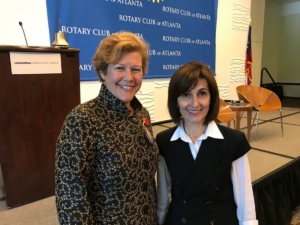 Martha Brooks, an Atlanta Rotarian who chairs CARE’s board, with Dina Kawar, Jordan’s ambassador to the United States, at the Rotary Club of Atlanta on June 4 (Photo by Maria Saporta)

“We are just getting started,” Brooks said. “We are trying to create sustainable livelihoods for ]people living in Jordan. It is our hope that other Rotary clubs around the world will join the initiative to help create livelihoods for displaced people, especially refugees from Syria.”

“Almost 94 percent of our GDP (gross domestic product) goes to debt service,” she said. “Seventy percent of our budget – $14 billion – goes to refugees. What is being asked of Jordan is inhumane. It is not asked to fill our pockets. It is asked to share our burden.”

Jordan has a total population of nearly 10 million people. Of those, 2 million are either Syrian refugees or displaced people who have fled their countries for a better life in Jordan.

But having such a large population of people with tremendous needs is taking its toll. On June 4, the same day as the Rotary meeting, the Jordan’s Prime Minister Hani al-Mulki tendered his resignation to Jordan’s King Abdullah II because of massive protests in the country over higher taxes and other austerity measures implemented to try to help the country out of its economic crisis.

Kawar said that despite high prices and difficult living conditions, “not once do you hear Jordanians complain about the refugees.”

For Brooks, it’s a matter of fairness. 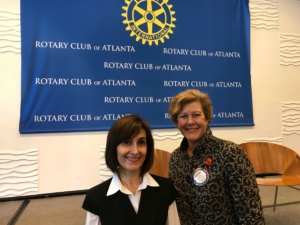 Dina Kawar, Jordan’s ambassador to the United States, with Martha Brooks, an Atlanta Rotarian who chairs CARE’s board, at the Rotary Club of Atlanta on June 4 (Photo by Maria Saporta)

“Almost 85 percent (of Syrians who have left their country) are hosted in developing countries and not in the United States or Europe,” Brooks told her fellow Rotarians.

She also showed a slide from Statista that outlined the 10 countries that hosted more than half of the world’s refugees as of the end of 2015. Top on that list was Jordan, with 2.7 million displaced people. It was followed by Turkey (2.5 million);

“What can we possibly do if we in the United States are not welcoming people in?” Brooks asked Rotarians. “We can help the countries that are.”

Rotarians will work with refugees, other displaced populations as well as Jordanians to help create new businesses – especially by the women who have been caring for their families. Rotarians can help mentor them as well as provide other resources to create jobs and help them own their own businesses.

Ambassador Kawar thanked Americans for the aid Jordan has already received, saying, “You are one of our main allies.”

Speaking of ambassadors, Atlanta attorney Randy Evans was sworn in as ambassador to Luxembourg on June 4.

Evans’ longtime law firm Dentons (formerly McKenna Long Aldridge) held a good-bye celebration for him at the Cherokee Town Club in Buckhead where political friends from both parties attended to wish Evans well in his new role. 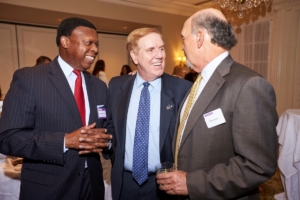 Dentons partner Gordon Giffin, who served as the U.S. Ambassador to Canada during the Clinton administration, gave Evans some pointers.

If Evans is asked whether there is someone in the U.S. Embassy who is a spy, Giffin jokingly said he should have a stock answer: “I have no idea what you are talking about. No one from the CIA works in my embassy.”

Evans, a prominent Republican, then asked for five minutes for rebuttal – joking about how Dentons and MLA had a number of Democrats in its firm – including Giffin, former U.S. Rep. Buddy Darden and former Georgia Attorney General Thurbert Baker. “Most of my friends are not in my political party,” Evans confessed.

The Rotary Club of Atlanta, in partnership with Atlanta-based CARE, is launching a new initiative to help the nation of Jordan assimilate its influx of Syrian refugees.

The Jordanian ambassador from the United States – Dina Kawar – addressed the Atlanta Rotary at its meeting June 4, when she was interview by Rotarian Martha Brooks, who is the current board chair for CARE.

Evans used the occasion to remember his grandmother, who tried to make him feel okay that it had taken him six years to complete college and get his law degree.

“My grandmother said, ‘It’s okay. It takes some people longer than others,’ ” Evans recalled. “My grandmother couldn’t read or write, but she was the smartest person I’ve ever met.”

Evans is expected to start his new post later this month.

Longtime breast cancer survivor Lila Hertz invited fellow survivors and supporters to her Buckhead home for lunch on May 30 so they could hear about Susan G. Komen’s “Bold Goal.”

Hertz, who has been one of strongest advocates for Susan G. Komen both locally and nationally, wanted Atlanta women to have a better appreciation for the research that the nonprofit has been funding to prevent and treat breast cancer.

“Locally, in order to meet this goal, we are going to have to push early detection,” said Cati Stone, executive director of Komen Greater Atlanta, adding the most important group to engage is black women. “African American women in metro Atlanta are 40 percent more likely to die than white women. To meet the bold goal locally (we have to address) racial and ethnic disparities.”

Two local doctors then gave the gathering updates on the latest research as well as a better understanding of when and how frequently they should get mammograms. The group heard from Dr. Susan Thomas, a Komen-funded researcher at Georgia Tech; and Dr. Karen Steinberg, retired senior science officer for the center for Disease Control and Prevention.

LaGrange College has received a $200,000 grant from the Arthur Vining Davis Foundation for a unique river initiative.

Students from multiple disciplines will kayak portions of the Chattahoochee River from North Georgia to Florida while conducting research, gathering ecological samples and filming a documentary, according to Dean Hartman, senior marketing and communications director for the college.

Hartman explained that LaGrange College President Dan Alexander has been talking to AWD Foundation President Nancy Cable for more than a year about a sustainability-related program to take advantage of the college’s location on West Point Lake and the Chattahoochee.

The documentary of the trip will debut at the campus Mountainfilm Festival and be entered into the international Mountainfilm exhibition in Colorado.