By Maria Saporta
As published in the Atlanta Business Chronicle on November 13, 2015.

Georgia’s nonprofit rankings on the annual Philanthropy 400 slipped a notch or two in the 2015 list put out by the Chronicle of Philanthropy.

But this year, Georgia only had four nonprofits in the top 20 — the Task Force for Global Health (which dropped down a notch to No. 7); the National Christian Foundation (No. 9); the Boys & Girls Clubs of America (No. 18); and the American Cancer Society (No. 19).

Habitat for Humanity International, which has been in the top 20 since 2007, came in at No. 26 this year.

The other 11 Georgia nonprofits on this year’s list are:

Every year, there is fluctuation in the numbers because of different waves in philanthropy. For example, the Task Force contributions are primarily medicines that are in-kind donations.

As a result, three nonprofits that were in last year’s list dropped off in the 2015 list: Mission to the World; Children’s Healthcare of Atlanta Foundation; and Christian Advocates Serving Evangelism.

But four nonprofits that were not on the 2014 list made the 2015 list: In Touch Ministries; the Arthritis Foundation; the Atlanta Community Food Bank; and Grady Memorial Hospital.

The recipients at this year’s event were:

“It’s thrilling to recognize Robinson and Georgia State alumni — and honorary alumni — whose careers and service are inspiring not only to me, but also to our students,” said Richard D. Phillips, dean of the Robinson College of Business.

Oglethorpe University recently announced it has surpassed its $50 million “Our Time” campaign goal, the largest in its history.

The campaign was announced publicly in 2013, and it was envisioned that it would be completed in June 2017.

Instead, Oglethorpe was able to claim victory by raising $50.2 million nearly two years early. The campaign will benefit capital and program objectives including student scholarships, faculty teaching and growth in planned giving.

“The early culmination of the Our Time campaign demonstrates a broad-based commitment and effort, most notably from our alumni, Board of Trustees and friends in the foundation community,” said Oglethorpe University President Larry Schall. 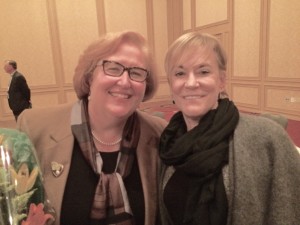 Hepner, who spent most of her career in banking, was honored in part for her role as a director on State Bank Financial Corp.’s board.

Hepner was the first woman to serve on the bank’s board, and she has since been joined by two other women directors: Ann Curry of Coxe, Curry & Associates; and Kelly Barrett of The Home Depot Inc.

“It was a fortunate day in my life when I met Virginia Hepner,” said Joe Evans, CEO of State Bank. Evans said that in 2009, “she joined eight men and was the lone woman” on the board.

At one point during her solo woman days on the bank’s board, Evans said she was the only director to oppose a particular policy. After some thought, all the other directors ended up agreeing with Hepner.

“It’s the most interesting board in town,” Hepner said.

Every year, the Association for Fundraising Professionals shines the spotlight on the most philanthropic people in our city.

On Nov. 3, the spotlight belonged to two deserving couples – John and Mary Brock; and Tom and Ann Cousins. 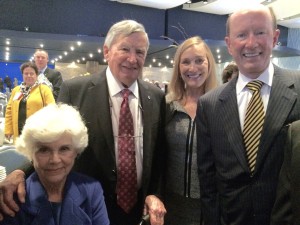 Alicia Philipp, president and CEO of the Community Foundation for Greater Atlanta, also paid tribute to another couple – Lloyd and Mary Ann Whitaker – for their transformational $10 million gift that had a domino impact on Atlanta.

The Whitaker gift was the catalyst behind the Atlanta History Center’s ability to plan for the move and restoration of the Cyclorama painting.

That led to Zoo Atlanta being able to expand its holdings and renovate the Cyclorama building in Grant Park into a new special events space and a home of the Zoo administration.

The gift also required the Atlanta History Center to get rid of its green house to make way for the Cyclorama painting. But it just so happened that Oakland Cemetery needed a greenhouse to take care of its landscape, so the greenhouse was moved to the historic cemetery – ironically a stone’s throw from the site of where there was the Battle of Atlanta, which is depicted in the Cyclorama painting.

The Whitakers humbly stood at their table and waved to the luncheon audience at the Georgia Aquarium.

The event, however, clearly belonged to the Brocks and the Cousins.

“This is the kind of town that can grab you and hold you,” Mary Brock said.

John Brock, CEO of Coca-Cola Enterprises, and his wife were singled out as “Volunteers of the Year” for their giving and fundraising abilities for Georgia Tech, was reflected on his life.

“I got a scholarship to Georgia Tech – that changed my life,” Brock said. “When (Georgia Tech President) Bud Peterson asked Mary and me to support Georgia Tech, it was easy.”

The National Philanthropy Day planners had asked the Cousins for years if they would accept the “Philanthropist of the Year.” In a moment of weakness, they agreed.

Ann Cousins said that on their way to the lunch, her husband asked why they had ever agreed. Tom Cousins is not someone who likes being honored.

But after Cousins Properties CEO Larry Gellerstedt III delivered his introduction, the Cousins were visibly moved to receive the award.

When he got up, Tom Cousins said: “I don’t get emotional at these things, Ann does. When Ann starts speaking, she starts crying.”

Then he delivered the quote of the luncheon: “Now I know what a lost dog in a meat house would feel like with all the philanthropists here.”