Environmentalist Ethel “Stephanie” Stuckey is making a career switch. At the request of her father, Stuckey has agreed to become president and CEO of the iconic American roadside franchise chain – Stuckey’s.

Her father – W.S. “Billy” Stuckey Jr. – will continue to serve as chairman of Stuckey’s board. 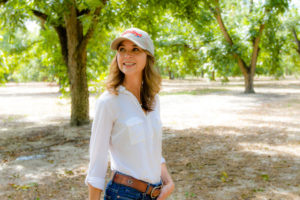 When asked why she had agreed to take over the family business, Stuckey said: “It’s my name up on those billboards. It’s my family legacy. I have an emotional attachment to the company.”

At its peak in 1971, there were more than 350 Stuckey’s along our nation’s roadways where travelers could “Relax-Refresh-Refuel.” The company was founded by Stephanie Stuckey’s grandfather – W.S. “Sylvester” Stuckey Sr. – in 1931 when he started selling pecans in a modest stand along Highway 23 in Eastman. The famous fudge and pecan roll logs were made by her grandmother, Ethel. By 1937, the treats proved so popular that the couple created their first bricks and mortar store.

Today, there are only 20 free-standing Stuckey’s that remain in the Southeast and Texas. There are about another 80 outlets that feature treats and snacks made by Stuckey’s.

“I think this is a company that with time, attention and love could really take off,” Stuckey said. “We have a strong pool of loyal customers. We have a strong brand. We have plans to expand the free-standing stores modestly in the short-term.”

But Stuckey said pecans are really at the heart of the business. The family owns a pecan orchard in Eastman, Ga., and it buys pecans from numerous other orchards in Georgia.

“The pecan is the only edible nut native to the United States,” said Stuckey, who plans to aggressively promote pecan snacks with the Stuckey name. “It’s incredibly healthy.”

Usually one of the most precarious times for a family business is transitioning ownership to a third generation.

Stuckey is one of five children, but “the others didn’t want it.” Her father’s partners were ready to sell out, and “I was the only family member who wanted to buy their interests,” Stuckey said. “I have put my savings into this company. It’s been part of the family and part of my life for my whole life.”

Stuckey is especially proud of the company’s history during segregation. It was featured in the movie “Green Book” as one of the few establishments in the South that would welcome African-American customers during the era of Jim Crow and segregation. 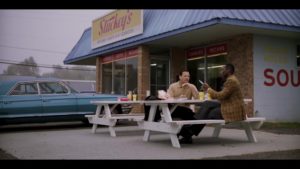 A scene from the movie “Green Book” that features one of the iconic Stuckey’s stores during the era of segregation (Special: Stuckey’s)

“My grandfather enjoyed serving the public and making them happy. To him, every traveler was a friend,” Stuckey said. “I’m ready to make a lot of new friends.”

Stuckey, who holds a bachelors and a law degree from The University of Georgia, served seven terms in the Georgia legislature. She most recently served as the chief resilience officer for the City of Atlanta and as director of sustainability services for the Southface Institute, an Atlanta-based environmental nonprofit.

Stuckey said she believes many of the skills she’s learned as a lawyer, environmentalist and manager are transferable to running Stuckey’s.

“I see my focus on making Stuckey’s profitable and making it a household brand again,” Stuckey said.

“I’m proud that Stuckey’s is remaining in the family and that Stephanie will carry on our legacy of providing quality stops for the roadside traveler, as well as expanding our brand online,” he said in a statement.

As for the future, Stephanie Stuckey said she’s already thinking ahead by looking to younger family members.

“We are already grooming the next generation,” she said.

The Atlanta Chapter of the American Jewish Committee awarded Carol B. Tomé with the National Human Relations on Oct. 29 at a gala at the St. Regis.

Tomé retired earlier this year as CFO of the Home Depot. She worked at Home Depot for 24 years (18 as CFO) under the leadership of all five of the company’s CEOs.

Blake described Tomé as a brave leader, who helped steer the company during the 2007-2008 burst of the housing bubble. He also said she was instrumental in the decision to sell HD Supply and focus on the core business. 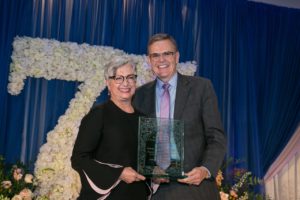 “We have all been incredibly honored to have worked with Carol,” Menear said. “Through it all, she represented our brand and our values every single day.”

Blank credited Ron Brill, the company’s original CFO, for recruiting Tomé to the company, a decision he applauded.   “You helped create a whole lot of wealth,” said Blank, who said Tomé and her husband Ramon have bought a 500-acre ranch.

The final speaker was David Abney, CEO of United Parcel Service, who had received the Human Relations Award in 2018. Tomé also serves on the board of UPS.

“In the 16 years I have known Carol on the UPS board, she has always viewed her role as a partner,” said Abney, who said he has learned not to believe her when she has urged him to take on civic roles “that won’t take much of your time.”

Tomé said she felt overwhelmed by the Human Relations honor and the tributes she had received.

“It is the highlight of my professional career,” she said before adding that she and her husband have formed the Tomé Foundation, which she hopes will support many great initiatives, including the American Jewish Committee.

“Her leadership from a corporate level, as well as her service to the Atlanta community, by serving on numerous boards across many organizations, exemplifies what this award represents,” said Dov Wilker, AJC Atlanta’s regional director.

Four leaders have joined the board of CURE Childhood Cancer, an Atlanta-based nonprofit that advances pediatric cancer research and provides patient and family support.

The four new members are:

Previous Article
Atlanta Audubon brings in leader experienced in governmental affairs, fundraising
Next Article
Olympics bombing hero Richard Jewell to be honored in Atlanta: ‘We felt like it was the right thing to do’