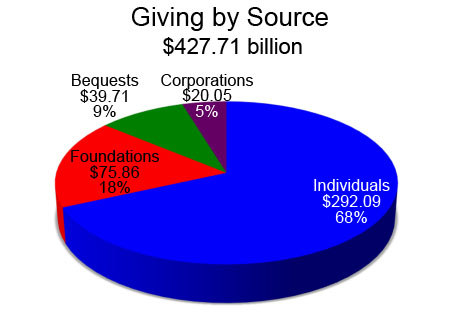 A new report by Giving USA shows that 2018 was a record year for giving, with Americans giving a total of $427.7 billion.

That’s a 0.7 percent increase over the year before. But when measured in inflation-adjusted dollars, it actually was a decrease of nearly 3 percent.

“There were some choppy seas this year,” David H. King told a group of about 100 people meeting at The Cathedral of St. Phillip in Buckhead. King previously served on the board of Giving USA. Every year he presents and interprets the findings at a program held by the Association of Fundraising Professionals of Greater Atlanta. 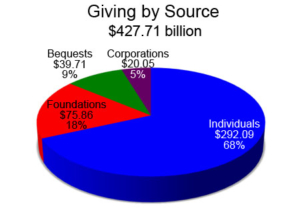 The study showed two other firsts:

It was the first time since Giving USA began in 1954 that individual giving was less than 70 percent of total giving – coming in at 68 percent.

It also was the first time that giving to religion dipped below 30 percent (down to 29 percent) – it is lowest point in the 40 years of the study.

“For the first time ever in a non-recession year, giving to religion went down,” King told the AFP monthly gathering. “Religion has gone from 53 percent (of total giving) in 1985 to 29 percent this past year. It’s been in a free-fall.”

When asked about why there has been such a steep decline to religious institutions, King, who is president and CEO of the Atlanta-based Alexander Haas fundraising firm, said that the millennial generation and Gen X are the generations with the lowest attendance in houses of worship. 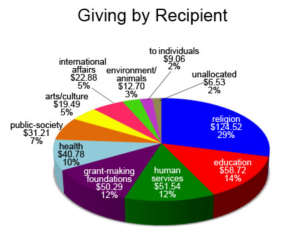 There were other factors that influenced the Giving USA results in 2018 – namely the changes in federal tax laws in 2018 that reduced the amount of philanthropic contributions that can be deducted from income taxes.

“The economy is growing, but giving is basically flat,” King said. “Changes in the tax law accelerated giving at the end of 2017, and it may have suppressed giving in 2018. The number of tax itemizers are down from 47 million donors to 18 million. It might be worse in 2019.”

When asked if Giving USA report offered an insights on giving in the South or by state, King said the data is provided by the Internal Revenue Service and it does not identify the state where the contributions have been made. 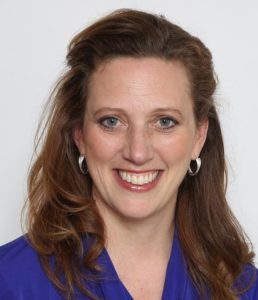 The goal of the “Water Audit Guidance for Commercial Buildings” is to conserve water, boost local economies and reduce pollution. It is a multiyear effort by the City Energy Project, the Institute for Market Transformation, the Natural Resources Defense Council, Southface, H.W. (Bill) Hoffman & Associates, the Atlanta Better Buildings Challenge and 20 local governments.

“This is a great program highlighting partnership and the importance of a very precious natural resource like water,” said Andrea Pinabell, president of Southface. “It will help organizations and municipalities big and small to not only save water but lower operational costs and give people the tools they need to be part of a more sustainable future.”

The guide provides a replicable, scalable model to establish best-in-class practices for urban water efficiency. The guide will allow auditors to participate in thorough and consistent auditing practices that are comparable throughout the country.

Southface, a 41-year-old nonprofit, has been a national leader in promoting green-building practices. The City Energy Project is being supported by Bloomberg Philanthropies, Doris Duke Charitable Foundation and the Kresge Foundation.

Jami Buck-Vance, a community builder, is the new board chair of EarthShare of Georgia – succeeding Sherry Crawley, a communications consultant.

EarthShare also announced that Stephanie Valdez-Stready, an executive with Cox Automotive, will serve as vice chair.

EarthShare Georgia was founded in 1992 by its member groups as the Environmental Fund for Georgia to represent them in workplace-giving campaigns and to provide an efficient and secure way to manage donations – a United Way for the environment.

In 2001, the Environmental Fund for Georgia officially affiliated with EarthShare National to become part of a network representing more than 500 environmental groups working locally, nationally and internationally. It also brought with it the fundraising power of the EarthShare network which has raised more than $350 million for the environment.

The Atlanta-based nonprofit CURE Childhood Cancer has new executive committee leadership and added two new members to its board.

Janet Street, director of outplacement for the Schenck School, is CURE’s new president. She has served on the board since 2015, and her son, Cam, is a childhood cancer survivor of Ewing’s sarcoma. When he experienced a recurrence, he was given a trial drug which had been funded by CURE, and overnight, after one infusion and without a single side effect, the tumors in his lungs disappeared.

“We were told from the start that this drug was in early-stage development, and the benefits would last only three months,” Street said. “It made us aware of the importance of cutting-edge research and gave us hope that other families might not have to endure the horrific pain of losing of a child. We will always be grateful to CURE for all they continue to do to help so many children win this war.”

Matt Gephardt, vice president and COO of the Gephardt Group and a survivor of childhood cancer, is serving as one of the two vice chairs along with Donna Baker, executive vice president of Alliant Employee Benefits.

Nick Kray of Pricewaterhouse Coopers is serving as treasurer, and Lauren Gearon, a childhood cancer survivor is serving as secretary.

The two new board members are Roger Herndon, managing director of Deloitte & Touche; and Casey Sentell, president of MLW Chairs. Sentell and his wife lost their daughter, Ava, to childhood cancer in 2010.