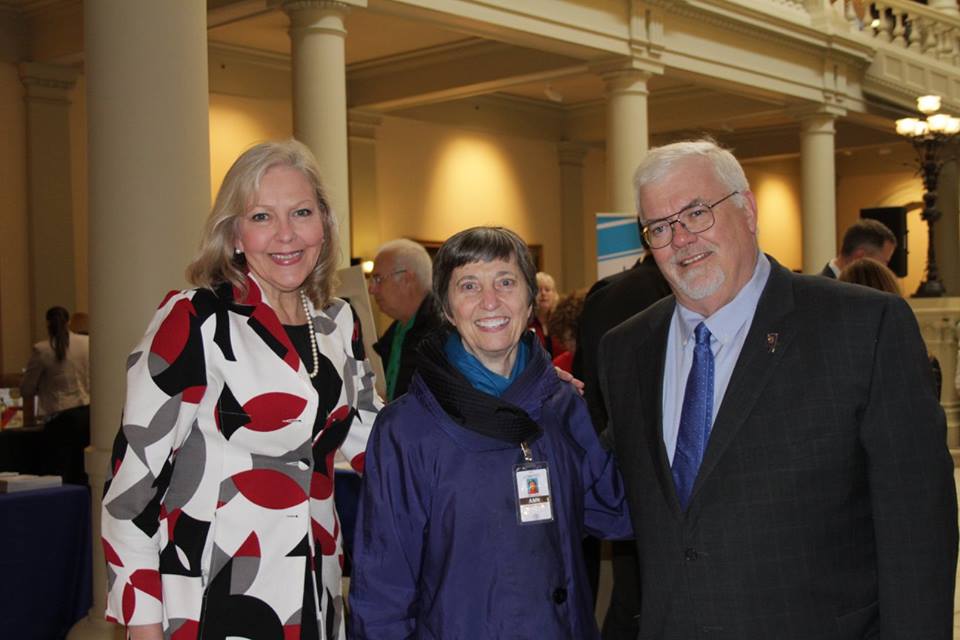 Literacy for All's Joy Hawkins with Ann Cramer and David Peterson at the State Capitol (Special: Literacy For All)

By Maria Saporta
As published in the Atlanta Business Chronicle on August 18, 2017

Low literacy — whether it’s among youth or adults — hurts the state’s economic potential and is a leading cause of poverty.

Now an unprecedented collaboration is underway in Georgia to address low literacy with a multi-generational approach.

The Georgia Literacy Commission, which held its third public meeting in Tifton on Aug. 14, reflects that collaboration. Georgia’s First Lady Sandra Deal is one of the commission’s co-chairs along with Wendell Dallas of Atlanta Gas Light; Phil Jacobs, a retired AT&T Georgia president; and Teya Ryan of Georgia Public Broadcasting. 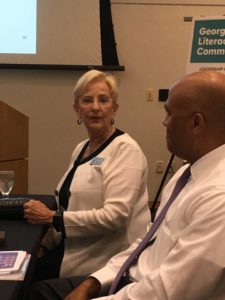 The Georgia Chamber of Commerce, the Georgia Partnership for Excellence in Education and Literacy For All (itself an alliance of several literacy initiatives) have joined together to support the Georgia Literacy Commission, which is expected to release its recommendations in October.

“It’s been amazing,” said Joy Hawkins, director of Literacy For All, which has been overseeing the management of the commission. “This is a collaborative effort with underpinnings in the business, political and nonprofit community. Our alliance partners literally are growing every day.”

For years, various literacy organizations have had difficulty being heard as education initiatives have been focused on early learning or other priorities. Low literacy often impacts a whole family — parents and children alike — and is more complicated to address.

That’s why they needed to quantify the crisis. Literacy for All teamed up with Ed Heys of Deloitte to study and quantify how low literacy impacts Georgia’s economic development. Low literacy is defined as people who read below the fifth-grade level.

The State of Literacy Report identified:

About one in six Georgians between the ages of 19 and 65 are considered to have low literacy — equating to roughly 1 million adults.

It is estimated that adult low literacy costs the state $1.2 billion annually in public assistance, incarceration and lost tax revenue.

While improvements are being made statewide in education, 65 percent of Georgia’s students are not reading proficiently by the end of third grade.

Chris Clark, president of the Georgia Chamber, said that the 1 million adults with low literacy skills “are challenged to keep pace with workforce needs.” 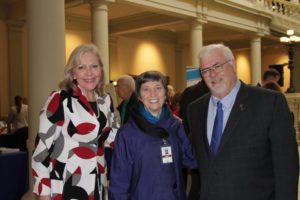 Literacy for All’s Joy Hawkins with Ann Cramer and David Peterson at the State Capitol (Special: Literacy For All)

Hawkins said “it was not a hard sell” to get people to join the commission — which includes business leaders, state legislators and key government leaders, such as Steve Wrigley, chancellor of the Georgia Regents; and Gretchen Corbin, commissioner of the Technical College System of Georgia.

Given the high-powered people who are on the commission, Hawkins is optimistic that the recommendations to be released in a couple of months will lead to tangible legislation and a comprehensive approach.

The commission’s work is undergirded by Literacy For All, which launched in November 2016 as a donor-advised fund of the Community Foundation for Greater Atlanta.

Literacy For All just awarded $216,000 in grants to 10 literacy-related nonprofits around the state — showing there’s also strong support in the donor community.

“There are a lot of moving parts,” Hawkins said. “I do think this level of collaboration is unprecedented.”

Hawkins said she was brought on to pull together the effort for its first year, and her contract will end in November. But she was confident efforts would continue beyond the commission’s recommendations, saying: “There’s plenty of work to be done.”

Jay Cranman has been CEO of Hands On Atlanta for only 14 months, but he is well aware of the organization’s legacy when it comes to volunteerism and community impact.

For starters, he joined Hands On Atlanta after working at Points of Light as its vice president of venture development and corporate partnerships. 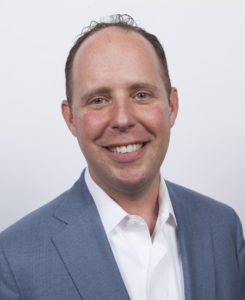 Jay Cranman of Hands On Atlanta

Points of Light is the Atlanta-based national organization that was formed out of its merger with Hands On Network, an outgrowth of Hands On Atlanta. Points of Light was inspired by former President George H.W. Bush, and his son, Neil Bush, chairs the board.

“My hope is that Hands On Atlanta will become the flagship affiliate in the Hands On Network,” Cranman said. “Right now, we are in the top 10. It is time for us to be innovative.”

Hands On Atlanta was founded in 1989 by a group of citizen activists, many of whom are still engaged with the organization. Michelle Nunn was the first executive director, and she went on to lead Hands On Network and Points of Light.

“About six months ago, we decided we needed to bring young professionals on board,” said Cranman, who is 42 and a native of Marietta. “We have created the Changemaker Board of 25 to 35 year olds.”

Hands On Atlanta also is working with about 15 cities in metro Atlanta to expand the organization’s reach, and it is partnering with other nonprofits to find ways it can have a greater impact.

“Everything we do at Hands On Atlanta is trying to do it in partnership with another entity in Atlanta,” Cranman said. “How can we have a collective impact?”

Cranman used to work with Andersen Consulting, now Accenture, in Florida. He was drawn to Points of Light because he wanted to see the impact of his work. And that’s only more true now that he is running Hands On Atlanta.

As Cranman said: “I’m excited to really continue to invest my time in the local community.”

Soon there will be new leadership at Points of Light.

In July, the board of the Atlanta organization named Natalye Paquin as its next CEO beginning in September.

Paquin currently is the chief transformation officer at the Girl Scouts of the USA. 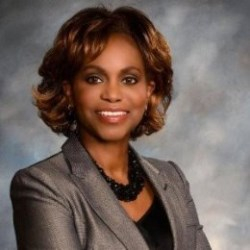 Natalye Paquin of Points of Light

“We are pleased to welcome Natalye Paquin as the new CEO of Points of Light,” said Neil Bush, chairman of the Points of Light board, in a statement. “She brings extensive experience in nonprofit leadership, education and civil rights to the role, as well as a skilled hand at working with large networks and volunteer organizations — all key to the Points of Light mission.”

Bush went on to say describe Paquin’s “undisputed passion for good, demonstrated leadership skills and commitment to action make her an exceptional choice to lead and build on the legacy of Points of Light as an organization that gets things done.”

Paquin has dedicated a significant portion of her career to working on challenging education issues. First, she worked as a civil rights attorney with the U.S. Department of Education, and then in legal and executive roles in two of the nation’s largest public school systems — the Philadelphia School District and the Chicago Public Schools.

“I am inspired by President George H. W. Bush’s vision that calls on service to communities,” Paquin said in a statement. “I understand first-hand the joy and benefit of volunteering and the value of collective impact. I’m honored to join Points of Light at this moment in time.”