The Peach Drop – the New Year’s Eve celebration at Underground Atlanta – almost didn’t happen this year because the property is being sold. 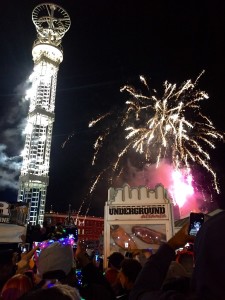 It was not clear who should put on the Peach Drop – the city or the developer who is buying the property. At the 11th hour, the city decided to take it on, and thousands of people showed up, as they have for years.

Over the years, Atlanta has held a variety of public New Year’s Eve celebrations. We used to welcome the New Year at the Coca-Cola sign next to what is now the Georgia Pacific Building, until the sign came down in the early 1980s.

In the 90s, the Midtown Alliance organized the family-oriented First Night with a number of arts and cultural events along with a fireworks display at midnight.

Then came the Peach Drop – a gathering place where Atlanta’s diverse population could enjoy the uplifting feeling of starting a new year.

With redevelopment plans for Underground, it’s unclear if the Peach Drop will continue.

But Atlanta needs to keep an annual celebration for the public.

We could ring in the new year at the new neon Coca-Cola sign, overlooking Woodruff Park.

Centennial Olympic Park would be a good place to bid farewell to one year, while ushering in a new one.

Or we could recreate First Night in downtown or Midtown – closing off Peachtree – and creating an Atlanta Streets Alive experience.

A New Year’s Eve celebration is important, because it’s the one day of the year when we can remove our fears and reach out to people we do not know – to simply wish them well.

We also can show off our hospitality to out-of-town football fans here for the Chick-fil-A bowl.

It’s moments like these that bring out the best in us.