Back when he was working at the Southface Energy Institute in the mid-2000s, Adam Deck came up with the idea of creating a nonprofit that would recycle building materials, keeping them out of landfills.

He started working on a business plan, but had a hard time getting traction. 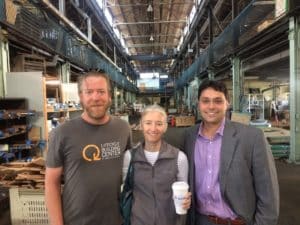 Then, in 2011, Adam Deck was sitting at the bar at Manuel’s Tavern, and he started talking to the person sitting next to him. Deck mentioned the fledgling nonprofit and how it needed a large warehouse space to base its operations.

Harry Jenkins began asking him questions, before telling Deck that he might have just the spot for what would become the Lifecycle Building Center.

Quickly, Deck and then-board chair Shannon Goodman went to check out the facility on Murphy Avenue and realized it was perfect for them. They were able to negotiate a five-year lease with an option to buy the facility during that period.

As the nonprofit built its operation, the area in Southwest Atlanta was beginning to change and warehouse space was at a premium. The southwest portion of the Atlanta BeltLine also was getting built nearby, making LBC’s location more valuable.

Nonprofit officials realized it was a big risk to keep renting the facility.

Through multiple partnerships with public and private entities, the nonprofit was able to get a loan to buy the property, which actually includes two warehouses.

The LBC has proven its mission. Since 2011, it has prevented 2.1 million pounds of building materials from ending up in a landfill.

Instead, the products are sold to the public at highly discounted prices or donated to nonprofits that need the materials.

To pay off the loan and renovate the facility, LBC is planning to launch a capital campaign by next summer so it can continue its mission of recycling building materials for the good of our region.