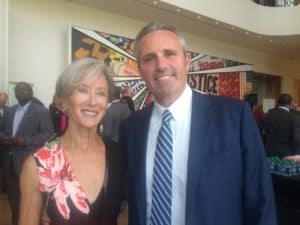 The Koch brothers have a national reputation for funding Republican candidates and conservative causes.

But in Georgia, there is another side to the Koch family. Koch Industries bought Georgia-Pacific in 2005. One year later, Charles Koch’s wife, Elizabeth Koch, started Youth Entrepreneurs Georgia to help spark an entrepreneurial spirit among students attending public schools.

Elizabeth Koch remembers how upset her husband was when he realized economics was not being taught in most public schools.

Ten years later, YE Georgia has expanded to several counties and worked with 2,000 students. The program currently reaches 360 students a year in 13 schools.

But Koch, along with Georgia-Pacific CEO Jim Hannan and YE Georgia executive director Scott Brown, have much more ambitious plans for the program.

YE Georgia celebrated its 10th anniversary in May at a reception held in the Center for Civil and Human Rights.

That’s when Koch launched the Chairman’s Circle, asking for support from individuals, foundations and corporations.

During the reception Scott Brown said YE Georgia is now primed for its next level of success by reaching more classrooms throughout the state.

With expanded support, the organization will be able to change even more lives of young people in Georgia by opening up new doors of opportunity.