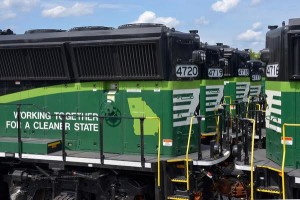 The new locomotive is up to 25 percent more efficient than the train engines currently rolling on our rails, making them even more environment-friendly.

The more freight that travels on railroads rather than trucks and highways, the better off we will be.

That statement has never been truer than with the unveiling of the new “Eco” locomotive. Traditional trains carry one ton of freight 450 miles on one gallon of fuel — at least four times more efficient than trucks.

The number of injuries and fatalities are far fewer on our rail corridors than on our highways.

With these benefits, it makes all the sense in the world to have a public and private partnership to move more freight by rail, rather than trucks.

Norfolk Southern is covering one-third of the cost of the 10 new locomotives, while the federal government is covering the remaining $38 million.

Imagine the benefits we could reap if we would take a similar approach in improving our rail infrastructure. Let’s forge a partnership between our government and the railroads to remove at-grade crossings, to improve the tracks so trains can reach higher speeds and provide more double tracks for more efficient movement of time-sensitive freight.

As part of that partnership — to make trains more competitive — railroads should allow passenger trains to operate on their tracks.

The more people we get off the roads, the less congestion and accidents we will have, the more fuel we will save and the cleaner our air will be.

I am a hopeless romantic when it comes to trains.

But seeing the new Norfolk Southern Eco locomotives, I know my heart is not lost in a nostalgic past.

Instead, it is fully grounded in an optimistic future.

Everyone wins when we move more freight — and more people — onto trains.