Update: The Braves back down and say the Hank Aaron statue will stay in Atlanta. Read Maria’s report HERE

Absurd. That’s how I’d describe the custody battle over the statue of Hank Aaron hitting his 715th home run.

Hank Aaron means so much to Atlanta and the Braves. The dispute over the location of the statue has become as emotional as the baseball team’s decision to leave its 50-year-old Atlanta home for a new stadium in Cobb County. 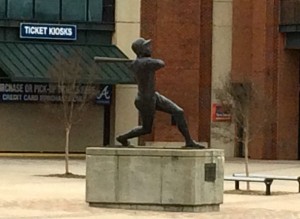 For Atlantans, the statue belongs in the location of where the Home Run King made history – on the site of the old Atlanta-Fulton County Stadium next to Hank Aaron Boulevard.

For the Braves, the statue belongs with the team, at its new home in Cobb County.

In 1980, a group of Atlanta citizens raised $150,000 for the statue.  Neither the Atlanta Braves nor its owner Ted Turner contributed towards the project.

The statue was unveiled and dedicated in 1982 – and it was handed over to the City of Atlanta and Fulton County Recreation Authority.

After the 1996 Olympics, when the Olympic Stadium became Turner Field and the original stadium was demolished, the Authority’s ownership of the statue was reconfirmed in government documents, according to director Keisha Lance Bottoms.

The Braves say it’s up to Hank Aaron to decide, but the baseball great doesn’t own the statue, the residents in Atlanta do.

Plus, Aaron told me in an October 2014 interview, “I have no connection to Cobb County. My connection is with Fulton County. I hit the home run in Fulton County Stadium.”

The solution may be for the Braves to commission a new Hank Aaron statue for the Cobb County stadium, and leave the current statue at its rightful home.

The legacy of Hank Aaron belongs in both places.