Commentary: Honoring those who help teens stay in school 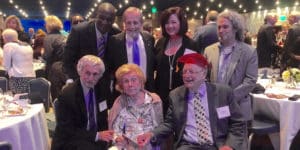 The nonprofit began in Atlanta in the late 1960s to help teenagers stay in school.

After nearly 50 years, the mission is the same – but its scope of work has gone national.

“It started in one school in Atlanta, and now it’s in 2,400 schools across the country,” said Milliken, who became CEO of the national organization

Shortly after meeting Milliken and Shorthouse in the early 1970s, George Johnson remembers wondering what these two hippies from Pittsburgh were doing in Atlanta.

But he said they ended up changing the way he looked at the world forever. They helped Johnson realize that not everyone was able to enjoy the stable home and lifestyle he had known. And those children needed hands-on attention from loving adults to help them stay in school.

Johnson was honored for his longtime support of the organization.

Another convert was Anne Cox Chambers, who has been a generous donor to the organization for decades. In fact, the reward Johnson received is called the Anne Cox Chambers Champion for Kids Award.

Seeing her at the dinner, Johnson said no one had done more for the organization than Chambers and her family.

Today, Communities in Schools is serving 1.5 million students in more than 25 states. It helps 122,000 students in Georgia.  And 90 percent of all the program’s students in the country graduate from high school.

When they were launching the organization five decades ago, Shorthouse said they naively thought it would only take five to 10 years to solve the problem of keeping poor kids in schools.

But now Milliken said he realizes the problem is not the kids, but the adults.

Previous Article
Gone with the Wind by Kelly Jordan
Next Article
Millennials without property insurance: What to do if bicycle, laptop stolen?