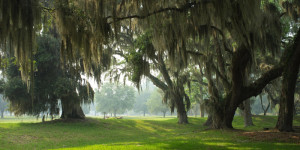 Georgia Legacy – a coalition of environmental organizations – has a new proposal to create a state fund for land conservation.
RALPH DAILY / FLICKR.COM/RALPHANDJENNY

Unlike several of its neighboring states, Georgia does not have a dedicated fund for land conservation. Environmentalists hope to get that changed in 2016.

What it doesn’t have is a dedicated fund to buy land to protect those resources.

In 1998, Georgia voters were asked if they would support a real estate transfer tax to create such a fund. It failed because it was seen as a tax increase.

Now Georgia Legacy – a coalition of environmental organizations – has a new proposal.

It wants 75 percent of all state taxes collected from the sale of outdoor recreational goods to go to a dedicated fund for land conservation.

The fund could generate about $40 million a year to purchase environmentally sensitive property, to help local governments acquire their own green space, and to help maintain existing conservation property.

Georgia currently owns only 1.2 percent of the land area in the state. That places the Peach State 12th among the 16 Southern states for land conservation.

Since Georgia Legacy plans to use existing tax dollars, environmentalists hope the proposal will be embraced by legislators and voters alike.

It may be an uphill battle, since a constitutional amendment requires two-thirds support from the General Assembly and must be approved by voters.

But there’s nonpartisan support among lawmakers for land protection.  Now it’s a matter of environmentalists educating them and voters on the importance of protecting Georgia’s green spaces.

Protecting Georgia’s natural beauty would be a special legacy.