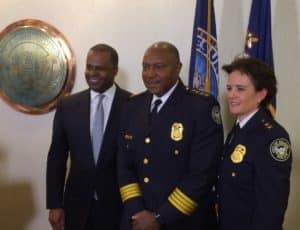 Police Chief George Turner will be retiring from his post at the end of the year – after spending 35 years with the Atlanta Police Department.

The news was met with sadness from the business-led Atlanta Police Foundation, the organization that has worked closely with Turner since he was made police chief in 2010.

Atlanta Police Chief George Turner is as Atlanta as one can be. He was born at Grady Hospital, and he grew up in the Perry Homes public housing neighborhood.

Statistics show that many of the young black males who grew up in Perry Homes ended up in prison or didn’t survive the streets.

He will retire at the end of the year, thanks to the city’s generous and solvent pension system. He actually stood to make a little less money if he stayed on, rather than retiring.

Turner’s contributions to Atlanta were heralded by Mayor Kasim Reed, top members of Turner’s team, and the business community, which has worked closely with the Chief from the moment he was named in 2010.

Dave Wilkinson, president and CEO of the Atlanta Police Foundation, called Turner the best of the best.

During the press conference to bid farewell to Turner and to welcome the next Police Chief Erika Shields, Turner kept talking about how much he loves Atlanta.

The community raised him, and in turn he was a link between police and the community. The force reflects Atlanta’s diversity, an effort that began in 1948 when the city hired its first black officer.

Turner’s legacy is a nearly 30 percent drop in crime, improved morale at APD as well as the establishment of strong ties between the police and citizens.

The tone of inclusion and compassion was set at the top.  Thank you Chief Turner.