Newly-installed U.S. Commerce Secretary Penny Pritzker, after visiting with several local executives and entrepreneurs, said Atlanta had a “vibrant ecosystem” with a “great sense of optimism.”

Pritzer was in Atlanta as part of her first 100-day nationwide listening tour to engage with business, academic and thought leaders to hear concerns and ideas on how the public and private sectors can work together to strengthen the economy.

While in Atlanta, Pritzker had dinner Thursday night with Mayor Kasim Reed, when they discussed business opportunities in the city as well as plans to build a new stadium for the Atanta Falcons.

On Friday morning, Pritzker had a roundtable meeting with executives and entrepreneurs at Invest Atlanta, where they discussed businesses from urban agriculture to entrepreneurship. 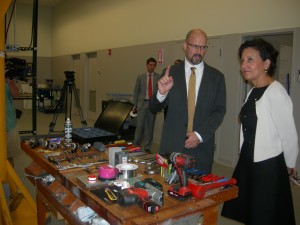 And then Pritzker went to the Global Center for Medical Innovation near the Georgia Tech campus to witness the research, development and business application of about 15 to 20 start-up companies in a venture that has received both state and federal support.

During the tour, she met with a company that is developing new bone-like material that can replace bone grafting for people who have had serious injuries.

Pritzker, whose husband is an ophthalmologist, also saw a new technology being developed by Digital Vision System that would replace the traditional eye exam where a patient looks into a series of lenses to determine what’s best to a digital machine that can do it more easily and more accurately. Clinical trials on that new eye exam technology should begin in the fall.

“We have supported the creation of the facility here — entrepreneurs taking ideas from concept to market,” Pritzker said. “You don’t do that by yourself.”

Later Friday, Pritzker was also going to visit UPS headquarters to meet with another group of executives. And she also was planning to spend time with Commerce Department employees based in Atlanta.

Encouraging new technology and start-up companies is a major economic development goal in Atlanta, and several organizations had applied to the U.S. Department of Commerce to get a regional patent office established in the city. 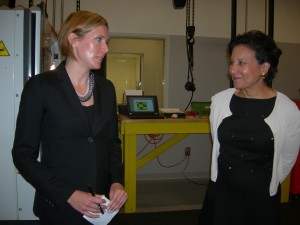 One of those behind the effort has been Brian McGowan, president and CEO of Invest Atlanta, who used to be with the U.S. Department of Commerce before joining the Reed administration.

When asked about Atlanta’s prospects of getting a patent office, Pritzker said McGowan “had some novel ideas about how we might be able to facilitate something here. I’m looking forward to hearing his ideas.”

Pritzker also talked about her family’s special connection to Atlanta.

“My father, when I was seven years old, moved here for six months to work on the finishing of the Hyatt Regency in 1967,” Pritzker said.

The hotel, which was designed by Atlanta architect John Portman, was so different than any other hotel with its interior atrium, no established hotel brand wanted to be part of it.

But the Pritzkers, who owned some motor motels in the Chicago area, were intrigued. They decided to put the Hyatt name on the hotel, which became an instant phenomenon — and a hotel chain was born.

“I walked into the Hyatt Regency and to see it today, thriving,” Pritzker said. “It’s also exciting to see what’s happening in the entire ecosystem of Atlanta and continuing to see Atlanta grow.”