Communities need civic education and involvement in order to thrive. The State YMCA leads the way 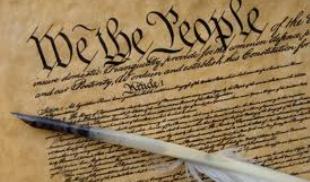 Modern education reform is part of a national effort to promote student achievement. A thoroughly modern idea, it grew in response to the 1950s Cold War race between the United States and the Soviet Union for worldwide technology dominance. 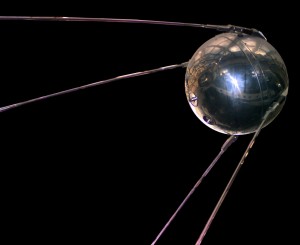 The Soviets launched Sputnik, the Earth’s first artificial satellite, in 1957. This technological success alarmed Americans and prompted a review of our education system.

If one could point to a symbol of that era, probably it would be the 1957 launch of the satellite “Sputnik.” Whatever else it did, the perception of the Russians beating the Americans into space (even if the catapulted object was nothing more than a 220-lb. radio transmitter) lodged itself as a threatening image deep in the American mind.

Indeed Sputnik not only launched a space race but changed forever (or so it seems from today’s vantage) how we talk about education. Certainly the space race unlocked the U.S. treasury in pursuit of new national priorities. And near the top of this list was education — at every level. Colleges and universities undeniably played a critical role as educators and researchers, but so too did schools. With a growing need for accountability, the decade of the 1960s introduced a new urgency into the need for data collection and testing about what our children were being taught and how well they were learning in a nuclear age. The concept of “the Nation’s Report Card” was born in an atmosphere of competition and national defense.

Naturally, math and science gained in importance, and for a time, subjects like history and literature stood out, too — for they told the stories of our still-unfolding journey of freedom and self-government. However, the prioritization of standards was not without casualties. Certainly a big one in pre-collegiate education was civics, shuffled into the netherworld of the nonessential.

Today, when the term civics is used in our schools, it usually means instruction in the history of the United States, the Constitution, the Supreme Court, and elections. These are important, obviously. But the “civics” we may be leaving behind is that of experience, participation, and reflection in the context of community. Civic learning truly is life long, but begun early it can reinforce the truth that civic involvement is a necessity in the betterment of life for all. 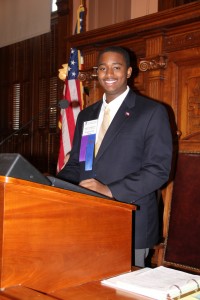 Anthony Chatman, from West Laurens High School in Dublin, was the State Y’s “Speaker of the House” in 2013. Credit: State YMCA of Georgia

There is no single blame for this change in educational priorities, but the emphasis on testing and achievement left limited room for experiential learning and character development. Once, character development occupied a hallowed role in education; indeed, it was seen as part of education’s essential purpose and why taxpayers were willing to support it. Stories whose lessons were moral and ethical filled our textbooks, contributing to a building of public trust that made democracy possible. It must be noted that the U.S. democracy still had its own “homework” to do in the areas of prejudice, segregation, and inequality. Education reflected the biases and prejudices of society, and certainly not all were welcomed on equal terms through the doors of the schoolhouse, the workplace, or the community.

The constant in this re-sorting and reorganization of educational priorities was that the education system was always seen as the key to positive social change. The revolutions in social relations (from voting and equal rights for women to civil rights) were fueled by the imagination present in our schools’ literature and the arts, by the stories of justice (and injustice), and the inspirational examples of history’s genuine heroes, from George Washington to Harriet Tubman. Concepts like service, sacrifice for others, and self-restraint marched across the pages.

If the value to society of the wisdom and courage expressed in these stories was not “testable,” earlier generations never doubted their social efficacy, and they believed there was no better time of life to become acquainted with them than in our youth. Just check out McGuffey’s Reader!

In a new era of standards and high-stake testing, where does one begin in talking about why civics matters? Will the nationally noted trend toward lack of civility, current inflamed examples of community breakdown, and lackluster voting patterns prod us to place civics education back in the heart of schools? In the meantime, does civics education for youth effectively take place anywhere? To that the answer is yes. Among the civic education organizations in existence, one of the most notable education organizations is the State YMCA of Georgia. 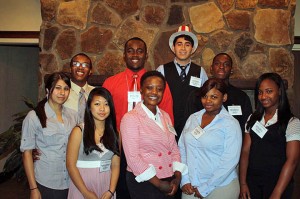 Almost a century old, its history overlaps a good deal of the history of Georgia’s public education system. The State Y — not to be confused with YMCAs in local communities that play a critical role as centers for healthy living, childcare, and childhood literacy — was established in 1929 to form YMCA programs in middle and high schools. Today there are about 100 Hi-Y, Tri-Hi-Y, and Co-ed Y school clubs in 84 Georgia counties.

Education-based and focused on civic learning, these clubs help develop community awareness, offer opportunities for civic learning, develop leadership, and adopt service projects. “Y” Club Advisors are volunteers, typically teachers, who serve as guides for clubs. The American Bar Association has ranked Georgia’s State YMCA in the top 5 nationally for its 68-year history of leadership in its Youth in Government Program in the state capitol.

The State Y also supports two youth assemblies (middle and high schools), a Georgia United Nations Assembly, the Washington Seminar, and Civic Youth Day. On September 17, more than 275 eighth-grade Georgia Studies teachers will assemble in the capitol for a day of civic instruction, learning, and briefings. Randell Trammell, the State Y’s CEO, says, “Every study we know of points to civic knowledge as the key to civic participation.” (His doctoral research is on that subject.) A recent survey by the National Constitution Center found that only 41% of American teens could name the three branches of government, while 59% could name all of the Three Stooges.

That’s part of the reason the State Y is creating the Georgia Center for Civic Education. Trammell says, “The vision is to have experiential civic education programs and resources for teachers in every Georgia school by 2020.” If they are successful, it will go far in remedying the “civics left behind.”

Yes, finding a job after schooling or college is important — always has been. Latching on to a satisfying career for which one is trained is important, too.

But let us also remember, in the words of James Oglethorpe, the founder of Georgia, “Not for self, but for others.” Such lessons and values are at the heart of civics education, the absence of which in our schools may be contributing to young people who do not know what it means to be responsible citizens in a democratic society. Organizations like the Y that do critical work in teaching our youth the responsibility of citizenship are to be commended: for on such work hangs the quality of our communities, our lives, our freedoms, and our future.