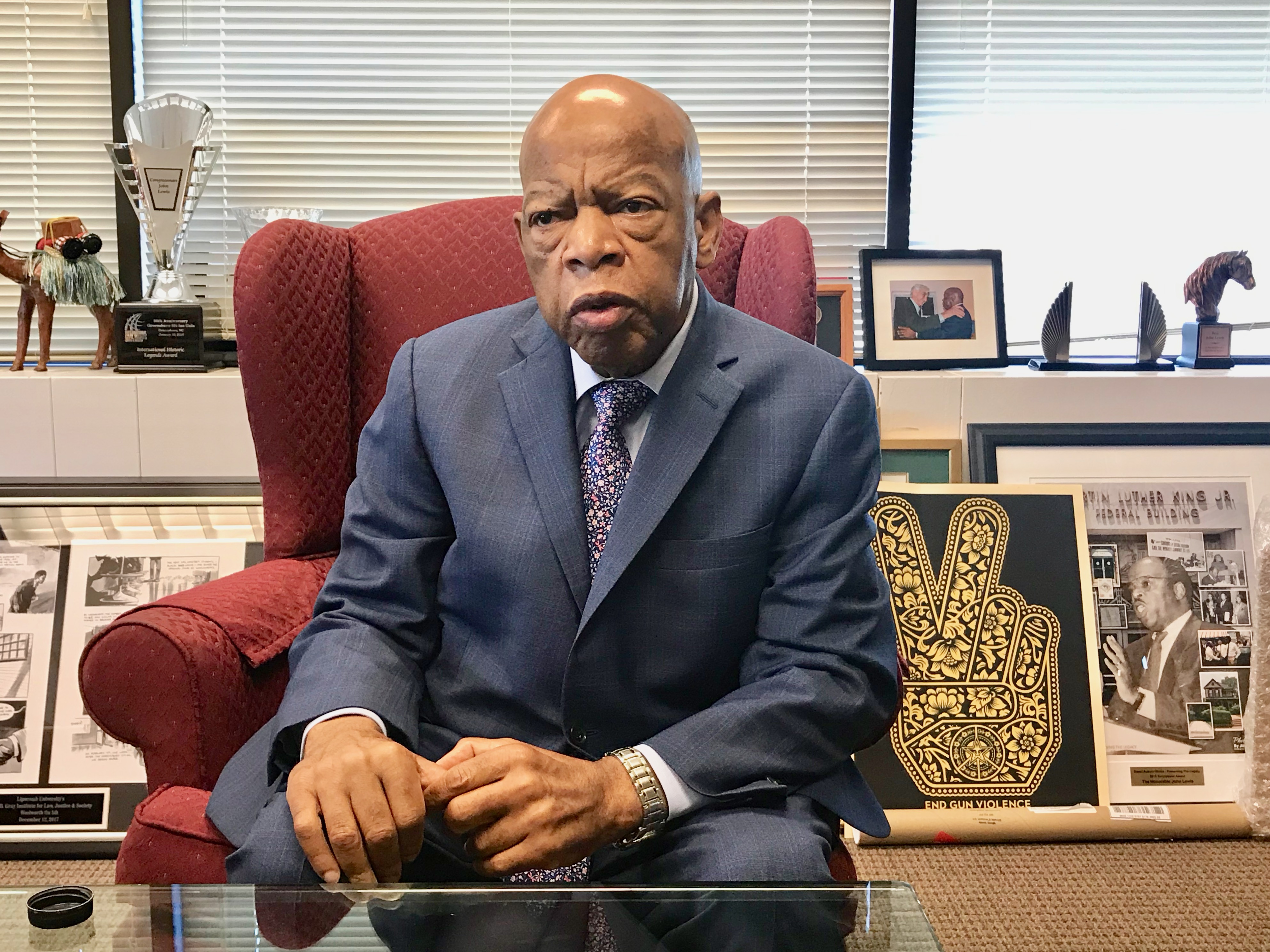 An amazing coalition of leaders has formed to support extending the contract of Atlanta Public Schools Superintendent Meria Carstarphen.

U.S. Congressman John Lewis (D-Atlanta) has become one of the most outspoken leaders on her behalf – sending a letter to members of the Atlanta Board of Education – that stated: “You have the opportunity to send a message to help address the long-standing inequities for black and brown children, especially the poorest ones. Stay the course. Don’t give up! I urge you to continue on your path with our great superintendent Meria Carstarphen, and extend progress.” 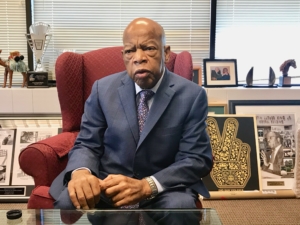 Among the leaders who have joined Lewis and signed a petition are former Atlanta Mayor Andrew Young, former Atlanta Mayor Shirley Franklin, former Gov. Roy Barnes as well as city-wide Councilmen Andre Dickens and Matt Westmoreland, who used to serve on the school board.

Also, more than two dozen principals of Atlanta’s elementary, middle and high schools also have signed a petition in support of Carstarphen.

It is unprecedented to have such a large group of principals and well-respected leaders to take such a public position in the fate of an Atlanta Public Schools superintendent.

The eight-member board apparently is divided on whether to extend Carstarphen’s contract beyond the current ending date of June 30, 2020. The board is one member short. A special election for District 2 will be held on Sept. 17 to fill that post, and it is almost certain that it will end up in a run-off. It is unsure whether the board is waiting until it has nine members to decide whether to extend Carstarphen’s contract.

Meanwhile, efforts are underway to galvanize support for the superintendent.

Among the others who have signed on to Congressman Lewis’ letter are: Milton Little of Atlanta’s United Way, John Hope Bryant of Operation HOPE, Humeta Embry of the AFSCME Georgia Local 1644, Demetric Bishop of the Georgia Federation of Public Service Employees, Mitch Reiner of, Capital Investment Advisors, Joe Handy of the Georgia Aquarium, Jeff Rosensweig of Emory University, Julius Hollis of Hollis and Co.,Jason Carter an attorney who is the grandson of former President Jimmy Carter, Ingrid Saunders Jones of the Coca-Cola Co. (retired), Beverly Daniel Tatum of Spelman College (retired) and the Westside Future Fund, Rabbi Peter Berg of the Temple, Rudy Beserra of the Coca-Cola Co, James Bailey of the Russell Center for Innovation, Comer Yates of the Atlanta Speech School, Mariela Romero of Univision, Egbert Perry of Integral, Shyam Reddy of BlueLinx Corp., Paul Wolpe of Emory, Clark Dean of Transwestern, Robert Balentine of Balentine and Co., Joe Bankoff of Georgia Tech (retired) and John Yates of Morris, Manning & Martin. 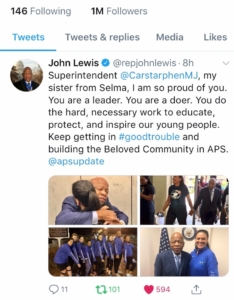 “Here’s the bottom line: APS is making great progress, especially with higher test scores and increasing graduation rates,” said Sylvia Russell, retired president of AT&T Georgia who serves on the prestigious Learn4Life board. “We are on the right path, but still have a long way to go.  That’s why it is so important to allow Superintendent Meria Carstarphen to finish the job.”

Congressman Lewis, a national icon and civil rights leader, agreed to an interview on Aug. 29, to explain why he is weighing in so heavily on a local matter.

“I feel very strongly that Meria should stay in Atlanta,” Lewis said. “She is a good, committed, dedicated superintendent.  When you have someone who is bringing about good and positive change, it makes me sad there’s this attempt to push someone out.”

Lewis did not want to elaborate on why some people believe might want Carstarphen gone other than saying: “There’s a clique of individuals who may feel they don’t have control, and they are not happy.” He also said: “Meria has a strong personality, but it’s engaging. I like her excitement and her passion for children.”

It’s hard to pinpoint where the opposition is coming from. Several leaders contacted said they were neutral about the outcome.

“This is not a situation where anybody’s input is helpful because it is a school board decision,” said Doug Hertz, chairman of the Atlanta Committee for Progress and CEO of United Distributors. “In my opinion, with regard to the Atlanta Committee for Progress, in whatever direction they go, we are all interested in making sure the Atlanta Public Schools continues to make progress on educating our children and getting better long-term results. We are going to try to help, if our help is requested, no matter who ends up being the superintendent.” 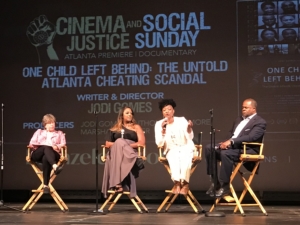 In his letter, Lewis reminded the board of the not so distant past. “Our community was deeply challenged during the cheating scandal,” he wrote. “But we are pulling ourselves up and now have a chance to meet the challenge.”

In the interview, Lewis said Carstarphen’s success is even more incredible when one remembers the sorry state of the school system and decade ago, when  the widespread cheating scandal caused national embarrassment to Atlanta and the school system.

“You don’t hear people talking about the cheating scandal anymore,” Lewis said. “It’s been tucked away in our past.”

Just last month, the Bronze Lens Festival presented the Atlanta premier of  “One Child Left Behind,” a gut-wrenching documentary of how a school system went off the rails. It was odd to have former Atlanta Mayor Kasim Reed on a panel after the showing, when he reminded the audience that city government doesn’t have a say in the school system.

But based on the response of so many influential leaders, it is obvious the future of Atlanta’s public schools is a community concern. It would be wise for the elected board members to remember they answer to the community. 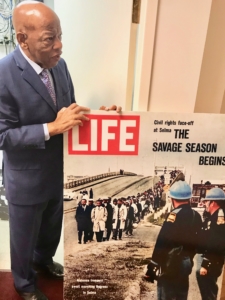 Congressman Lewis and Carstarphen share a common bond – Selma – where she grew up and where Lewis got his head bashed in on Bloody Sunday, on March 7, 1965.

“I met her family. They are just wonderful people,” Lewis said. “She is someone who came out of Selma, Alabama and was able to do well in other parts of the country. To have her in Atlanta is a tribute to the city.  She’s among the best superintendents in the country.”

Courtney English, the former chair of the Atlanta Board of Education, said “politics and personalities shouldn’t get in the way of what’s in the best interest of students” in Atlanta.

“Meria is a strong leader with proven result,” English said. “She has led the district out of a dark time to a place where more kids are graduating from high school (a record high graduation rate), SAT and ACTs scores are up and  more students are going to college. I’m proud to stand with Congressman John Lewis, Mayor Shirley Franklin, Gov. Roy Barnes, Ambassador Andrew Young and many others to urge the board extend her contract.”

As Congressman Lewis concluded in our interview: “To lose Meria Carstarphen would not be good for Atlanta or the school system. It would be a shame to lose her.”

Previous Article
With Georgia gambling legislation likely, no agreement yet on the spoils
Next Article
“Old” Atlanta