Commuter rail from Atlanta to Lovejoy is: ‘The Little Engine That Could’

A commuter rail line between Atlanta and Lovejoy should adopt the tagline:

And yes, we really can.

Forget all the panic from the Federal Transit Administration’s letter to the Georgia Department of Transportation on July 7 saying it was “deobligating” about $45 million in federal funds that had been earmarked for the commuter rail project by the U.S. Congress for more than a decade.

Forget all the angst that came from a Norfolk-Southern letter that made it sound as though the railroad opposed commuter rail running on its tracks from Atlanta to Lovejoy. Its letter said that having commuter rail within six years was “simply is not realistic,” and that the costs in a consultant’s study were likely to have been “dramatically understated.”

That letter almost caused the Clayton Commission to halt its MARTA journey.

This is not just wishful thinking. It is based on sound information and strategic thought.

Let’s start with the deobligating of funds from the FTA.

Dana Lemon, who represents Clayton County on the board of the Georgia Department of Transportation, said the whole “deobligation” news has been misstated and blown out of proportion.

“There was a misunderstanding because of the wording of the FTA letter,” said Lemon, who has had her facts checked out with all the powers that be. “The deobligating of those funds basically said to Georgia DOT, because you haven’t done anything in a long, long while, we are going to take your name off those funds. When you get ready to use these funds for construction of the commuter rail line, then you simply apply to the FTA to reauthorize those funds.”

Lemon went on to say that it would take an act of Congress to take those funds away from the Atlanta-Lovejoy commuter rail project.

“It’s in the law that those funds can not be reobligated to another project or agency or state,” Lemon said. “The only way that can happen is for Congress to change the law. That money is still dedicated to commuter rail from Atlanta to Macon.”

The timing of the FTA letter seemed bitterly ironic. The letter was dated exactly two days after the Clayton County Commission had voted 3-to-1 to let Clayton residents vote on a referendum for a full penny MARTA sales tax on Nov. 4 that would set aside half of a penny to develop commuter rail from MARTA’s existing south line down to Lovejoy.

The letter stated that the reason for deobligating the funds was because over the years, GDOT “was unable to secure the local financial share” of the cost of the project. The Clayton tax would qualify for that local share.

“It is our understanding, after having discussions with GDOT and the regional administrator of the FTA, that the funds for commuter rail in the corridor remain available,” Parker said. “It is our intention to develop a plan to fully utilize those funds.”

Ok, I think we can work through the FTA $45 million funding issue.

Norfolk-Southern may not yet be smart enough or strategic enough to realize it, but welcoming commuter rail on its tracks could be the best thing that could ever happen to the railroad.

Our nation badly needs to improve our railroad infrastructure. By partnering with local and state governments to improve its tracks for passenger rail, it will be able to improve the movement of freight.

It is in our nation’s interest to move more freight and people by rail than by trucks, cars and air primarily for environmental reasons.

Other railroads throughout the country have been able to leverage the benefits of providing commuter and passenger rail along their tracks along corridors with far more traffic than what exists between Atlanta and Macon.

If Norfolk-Southern wants to take a problem-solving, constructive approach that is in its own best interests, it would welcome entering into negotiations with MARTA, Clayton County, GDOT and the federal government on how to improve its rail corridor.

Imagine if we all could come up with a shared vision whereby the rail-line is upgraded with some double-tracking (allowing for both freight trains and passenger trains to share the same corridors by letting each other pass).

Imagine fewer at-grade crossings where the trains can travel at faster speeds.

Imagine straightening out some of the more dangerous curves so both freight and passenger trains can travel at faster speeds.

Under such a scenario, everyone benefits. the railroads can provide higher quality service to their customers and actually improve the capacity of the rail corridors. And people would be able to travel on one of the most fuel-efficient, least polluting modes of transportation available.

Norfolk-Southern, and the same applies to CSX and all the other railroads in this country, would find another serendipitous benefit. By letting people enjoy the pleasure of riding on rails, they actually could leverage it as a marketing opportunity for their freight business. It would be a great way to sell the movement of goods on rail rather than on trucks.

Because I love trains as much as I do — that includes both passenger and freight trains, it makes me really angry to read letters like the one from John V. Edwards, Norfolk-Southern’s general director of passenger policy in the strategic planning area, to Rich Krisak, MARTA’s chief operating officer.

It is anything but constructive, strategic or in Norfolk-Southern best interests.

Here is the Norfolk-Southern letter to MARTA: 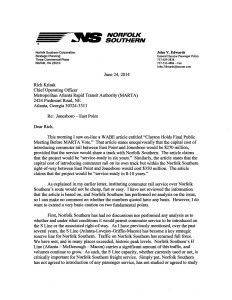 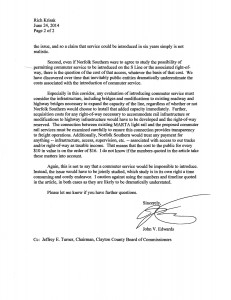