Controversial Seattle Mayor Mike McGinn tells his side of the story

The Atlanta LINK delegation was predisposed to believe Seattle’s mayor was out of step with the community.

But when Mike McGinn shared his view of the world and his city at a dinner Wednesday night — and all of a sudden, it was a lot harder to make judgments on who was right or wrong.

In some ways, McGinn is an accidental mayor. He entered the civic arena as an environmentalist, a cyclist, an urban advocate.

With little money, McGinn ran for mayor challenging incumbent Greg Nickels, someone he had formerly endorsed. And McGinn won — largely on a platform opposing spending $4.2 billion on a tunnel that would replace the structurally unsound viaduct that mars the city’s skyline and waterfront views.

As an avid bicyclist, McGinn is committed to a city with bike lanes, sidewalks, transit and a great quality of life. It’s those amenities that continue attracting a younger and creative generation that launch great companies.

Throw in a vibrant downtown, a commitment to historic preservation, parks and green space along with an active music and cultural scene, and one has all the ingredients needed to foster a “creative community.”

McGinn explained that the massive tunnel project appeals to those who favor expensive and expansive infrastructure projects. He went on to say that the deal the local leadership cut with the state stipulated that any cost over-runs would have to be paid for by the City of Seattle. 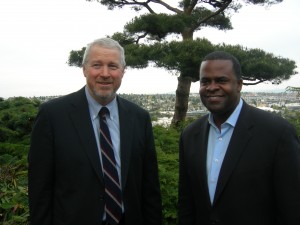 “Where the process goes wrong is not bringing in the public,” said McGinn, who rode his bicycle to the dinner at Canlis Restaurant. “Opinion leaders, business leaders, elected leaders align around something, but the people don’t align around it. The product was not in line with the region’s plans for new transit.”

Later McGinn added that a lot of leaders “are out of touch.”

Since becoming mayor, McGinn has drawn lots of critics. When asked why community leaders have turned on him, McGinn answered: “’Turning on you’ would make the suggestion that they were ever with me in the first place.”

McGinn certainly does not seem to mind being a non-conformist leader who is willing to take on the establishment. He told the Atlanta group how much he enjoys meeting with diverse constituencies and creating a grass-roots relationship between neighborhoods and city government.

He obviously believes that his mission as mayor is to represent the general populous and implement policies that will create a stronger city decades from now.

“I have loved being mayor,” McGinn said. “It is the most challenging, rewarding work I’ve ever undertaken. You have to be fit and ready and focused on the future…. I find it such a gift that I wake up everyday and try to make this city a better place.”

After McGinn spoke, members of the Atlanta delegation began to wonder whether Seattle’s mayor did make sense after all.

Previous Article
In Atlanta, it’s the ‘Atlanta Way;’ In Seattle, it’s the ‘Seattle Process’
Next Article
Seattle’s urban growth boundaries are no longer that controversial