COO Mike Geisler: Goal of Mayor Kasim Reed administration’s second term is ‘to get something done’

One thing that was keeping Mike Geisler up at night was the word “interim” in front of his title.

Geisler had been serving as interim chief operating officer for the City of Atlanta since early February, succeeding Duriya Farooqui who had left to join the Bain Consulting firm.

So a couple of weeks ago, Geisler went in to see his boss, Atlanta Mayor Kasim Reed.

“I brought up the fact I was very committed, very interested in the job,” said Geisler, recalling his conversation with the mayor when he asked if the word “interim” could be removed from his title. “I was enjoying the job.”

The mayor told him he would think about it and get back to him. Meanwhile the city had not started a formal search for a COO, so Geisler knew there likely wouldn’t be someone who would be stepping into the job immediately.

Then on Friday, July 18, the city announced that Geisler was now the city’s COO – meaning he might be able to start sleeping better at night. 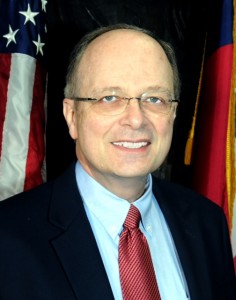 “Mike Geisler’s strong financial and operational experience has been a tremendous asset to the city in his interim role for the past six months,” Reed said in a statement. “His deep understanding of finance, combined with his effective and efficient management, provides our team with the leadership necessary to accomplish my second term priorities.”The problem is that the job of COO is one of the toughest at City Hall. Not only do all the departments report to the COO, any emergency or unforeseen crisis also ends up at his doorstep.

“It’s a complex job, but it’s also a fascinating job,” Geisler said. “It appeals to my psyche”

But perhaps the most difficult part of the job is developing a close working relationship with a mayor who is known to often work as an independent leader, often not delegating much control or responsibility to members of his team especially on special projects.

“Watching how he thinks, I’m absolutely fascinated by that,” said Geisler, adding that he “feels pretty comfortable” with the relationship he has developed with the mayor. “It’s an ongoing process. I’m respectful of the demands the job places on him.”

Geisler said he also is getting better at “reading where he’s coming from.” A key issue for the mayor is credibility and trust.

“He recognizes that trust is very important,” Geisler said. “It’s important that I create that kind of trust with him.”

Geisler has spent most of his professional life in the private sector. When Reed tapped him to be interim COO, he was serving as chief financial officer for the city’s Department of Watershed Management.

The contrast between the public sector and private sector has been distinct.

And many eyes are constantly on the mayor and City Hall, especially now when so many deals and developments are in the works — Underground Atlanta, the Civic Center, the Westside and the Atlanta Falcons Stadium, Fort McPherson and the Atlanta BeltLine, to name a few.

“The city does take opportunities as they present themselves,” Geisler said. “We do work with the mayor to make sure we are following the rules. The economic opportunities that are being created for the City of Atlanta are numerous. Atlanta is showing some of the most internal growth within the BeltLine.”

Geisler said the city has put disposing of those assets on the “front burner.”

Asked whether there was any of the second term malaise impacting either the mayor or City Hall, Geisler laughed.

“The mayor’s intensity is in line with someone in a first term. It is not depleted, not diminished,” I don’t think that’s in the mayor’s DNA or in my DNA. Our intention is to get something done.”

Previous Article
‘Dawn of the Planet of the Apes’ – Western-like plot of apes vs. humans
Next Article
Desegregating an entire community: Albany Movement takes flight (Conclusion)