The Corporate Volunteer Council of Atlanta (CVC) team had double the celebrations this week, ringing in its 30th anniversary and 25th annual IMPACT Awards with local corporate and government leaders.

Established in 1992, CVC brings together businesses and professionals that commit to making a difference in their communities through civic engagement and social impact. Every year, the organization gathers corporate leaders involved throughout Atlanta to celebrate the work they’ve accomplished.

Fittingly, the event began with a service project where attendees packed 500 treat bags as a thank-you to healthcare providers at Children’s Healthcare of Atlanta.

The CVC team then announced the winners of its IMPACT Awards. Metro Atlanta companies are nominated and the nominations are then reviewed by anonymous panels on national leaders in corporate social responsibility. 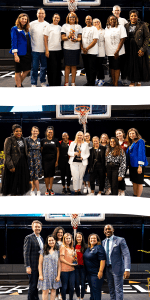 The Corporate Program of the Year was Bank of America, recognized for the company’s work connecting vulnerable populations to resources that help residents achieve financial security. With the help of its 298 Better Money Habits Champions, the financial institution has offered about 3,344 hours of financial literacy education.

Delta Air Lines was selected for this year’s IMPACT Corporate Project of the Year for its work celebrating Hank Aaron’s legacy in Atlanta’s Westside. In July 2021, Delta worked with the West Atlanta Watershed Alliance and the Atlanta Braves to restore a baseball field in Buck Mountain. With the help of volunteers, the organizations created a community space and an urban food garden. Delta also contributed $100,000 to a fund to honor Aaron’s legacy by expanding access to sports, business and education.

Kilpatrick Townsend, an international law firm headquartered in Atlanta, was selected for the IMPACT Corporate Skills-Based Award. They were recognized for their Law Camp with the Boys & Girls Club of Metro Atlanta which introduced high school students to careers in the legal profession and culminated in a mock trial. 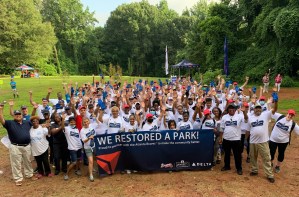 After the winners were announced, Dickens and Franklin took the stage for a discussion, moderated by Scott, about how the local government can join forces with the corporate sector to improve our city. Dickens donned a “Life is just better in Atlanta” shirt by the Grady Baby Co.

Scott asked the 61st and 58th mayors about ways to engage the corporate sector, overcome political divisions and maintain the activism generated in 2020. 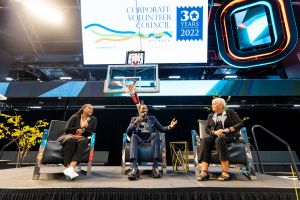 “The question for me is — 50 years from now, what will people remember about us? What are we doing today to grow the city that we want long term?” Franklin said. “I don’t want us to have to write a book about what we did, I want it to be evident in the lives of everyday people.”

Dickens echoed the sentiment, reiterating that power doesn’t only lie with the city government, but also with the everyday choices of our business and community leaders.

“What I see [here] is a committed group of people. You have to go out and spread the gospel that we are in this together,” he said. “I don’t like calls from corporations that tell me there’s someone poor, unemployed or homeless around them. I say, ‘Does everybody in the organization make a living wage?’ If everyone doesn’t, then you are contributing to a problem that you just asked me to solve.”

That’s why Dickens likens the city to a group project, rather than an individual thesis, that we all need to take part in.

“I have to continue to remind folks that it’s the corporate community, citizens and the government that solves problems together,” Dickens said. “Atlanta is a group project. The baseline is that we don’t have corporations here just making a profit — you have to be part of the project.”