For a cosmic week, news of the distant past and the skies above 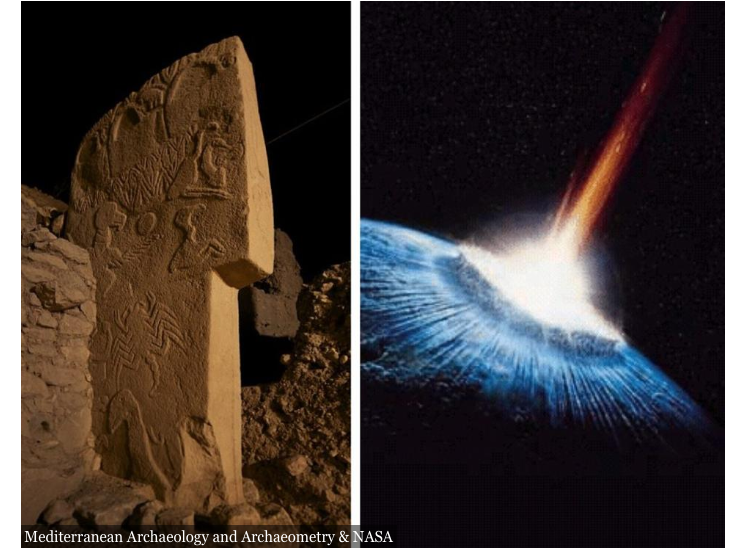 For a week when so many eyes have been fixed on the heavens, here’s some celestial news worth a closer look.

There’s a British writer named Graham Hancock who specializes in what has been described as “alternative history” or “pseudo-archaeology,” a genre that uses cosmic explanations to explain ancient events. As a boy I read with fascination Immanuel Velikovsky’s “Worlds in Collision,” which offered extraordinary explanations for all sorts of things. I had moved on by the time Erich von Daniken’s “Chariots of the Gods” came out, but it’s a more recent example.

In his books “Fingerprints of the Gods” and “Magicians of the Gods,” Hancock has argued than an ancient civilization, older than any we’ve known about, was destroyed when a comet struck the earth in about 10,450 BC, causing its axis to shift so that the civilization ended up where Antartica is now.

Hancock has no scientific training in the subjects he writes about, and experts have roundly rejected his ideas as bunk.  Every now and then, however, lightning strikes, or to put it in more scientific terms, somebody takes another look at a rock.

At a site called Potbelly Hill, or Gobeckli Tepe in Turkish, archaeologists have for several years been excavating the oldest monumental center so far discovered. Gobeckli Tepe, located about 20 miles north of the Syrian border, is thought to be about 12,000 years old.

Gobeckli Tepe has been challenging conventional ideas for years now, because it seems to suggest that people were building stone temple complexes and carving pictograms — pictures that stand for ideas — before there is any evidence they had begun growing crops and raising livestock. That turns our understanding of how early civilizations developed completely around.

At first, archaeologists took the strange carvings on the huge slab known as the Vulture Stone to be associated with burial rituals from that period. Then last April, two engineers at the University of Edinburgh, Martin Sweatman and Dimitrios Tsikritsis, published a startling hypothesis. They believe the Vulture Stone is a grim memorial to an event in which the earth was struck by a shower of comet fragments, with precise astronomical indicators to mark a date around 10,950 BC. Gobeckli Tepe, they say, was an observatory built after this global catastrophe to track meteors and comets.

People who are serious about these things will no doubt object to the prominent mention of Hancock, who has made lots of claims that haven’t been proven. Others have proposed, based on as-yet unsettled geological evidence, that a comet strike around this time caused huge changes to the earth’s environment. But one way to appreciate the revolutionary nature of what the Scottish researchers are proposing is to note that they sound closer to Hancock than his detractors.

Even without the wilder theories, Gobeckli Tepe poses some real challenges to our understanding of the past. It’s only a detail in the larger story, but if those who believe parts of a huge comet struck the earth are correct, the comet would have been have been a presence in the sky rivaling the sun and moon for 10,000 to 20,000 years before it struck. How would that have affected the human imagination, and how would our ancestors have accounted for its disappearance?

The date the researchers think is recorded on the Vulture Stone comes within 60 years of the estimated beginning of the Younger Dryas Cold Event, when the Northern Hemisphere, which had been getting warmer since the previous ice age, changed directions very abruptly and grew cooler and drier.

Whether the comet caused this, and whether the Vulture Stone is a memorial to the disaster, the Younger Dryas marked the beginning of settled agriculture and cities, as the abundant resources previously available to hunter-gatherers grew scarcer. We thought writing and monumental architecture also began in this period, before the discoveries at Gobeckli Tepe.

There’s reason to hope Hancock just got lucky on this one: He also believes that a large chunk of that comet is still out there, and will return to wipe us all out in 2030. His writings aren’t subject to peer review, but presumably the Edinburgh researchers’ theory is being subjected to an exhausting examination. There could be much more to learn from the excavation at Potbelly Hill, assuming, God forbid, no one blows it up. We wait for new developments from the distant past and the skies above.