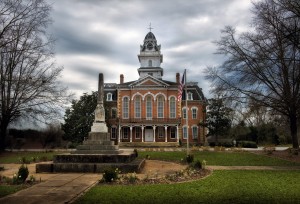 The Hancock County Courthouse in Sparta was built in the 1880s. Credit: Greg Newington

These days, the courthouse in your county may not be a place you give much thought to, unless you happen to work there. But once upon a time, the county courthouse served as the center of civic and public life — it was a hub, the place where the community’s business was conducted, where citizens could witness the judicial system in action, and where social activity thrived.

Like the post office and the public library, the courthouse anchored the local community and even served as a point of pride for residents — a symbol reflecting the people’s aspirations for their place, for their fellow citizens.

In a just-released book, Courthouses of Georgia (a copublication of ACCG – Georgia’s county association, the University of Georgia Press, and the Georgia Humanities Council) Australian photographer and Serenbe artist Greg Newington has captured the courthouses of each of Georgia’s 159 counties, and historian George Justice has contributed historical background and architectural details about them.

The Hancock County Courthouse in Sparta was built in the 1880s. Credit: Greg Newington

Criss-crossing the state over two years in a journey adding up to 23,000 miles, Newington discovered the “personality” of each structure in images that are surprisingly beautiful and varied. Sometimes glimpses of the past seem visible in the weathered, sturdy edifices; other times, the simplicity or plainness of some buildings may recall the mundane but important work that takes place on the premises.

Fayette County’s courthouse, in Fayetteville, was built in 1825 and is the oldest courthouse building in the state. Credit: Greg Newington

Although removed from many of their historical functions, courthouses are still essential to local government, typically providing space for administrative offices for various public servants, archives of important records, and officers of the court to preside over official hearings. In 2009 the ACCG, Georgia’s county association, conceived of a project to document this aspect of our state’s history as a way of celebrating our organization’s centennial anniversary in 2014.

As the state’s official organization dedicated to serving all county governments in Georgia, ACCG serves as the consensus-building, training, and legislative organization for all county governments in the state. Our primary charge is to work to ensure that counties can provide the necessary leadership, services and programs to meet the health, safety, and welfare needs of their citizens.

The Colquitt County courthouse in Moultrie was built of marble in 1902. Credit: Greg Newington

My hope is that Courthouses of Georgia might inspire us all to take a second look at the public buildings we so rarely consider, and to think about where is the heart of my community? What does it mean to be a public space, a community anchor? Most important, what can we do to maintain and preserve the historical significance of these community anchors?

Ross King is the executive director of ACCG, Georgia’s county association, and is a Georgia Humanities Council board member.

Previous Article
Georgia paints itself into a corner on Obamacare, while others look for wiggle room
Next Article
Atlanta seeks ideas to cash in on public domain in busy parts of city