The Covenant House Georgia will be able to serve more homeless youth thanks to a successful capital campaign that raised $10.1 million — $400,000 more than the initial goal.

The campaign helped build the Gift of Hope Apartments, a 30-unit building that will house homeless youth on the seven-acre Covenant House campus in Northwest Atlanta. The Covenant House held a ribbon-cutting ceremony for the apartment building during an unusually warm afternoon on April 22. 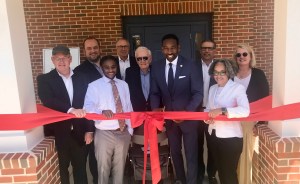 Ribbon-cutting ceremony of the Gift of Hope Apartments on the Covenant House Georgia’s campus. (Photo by Maria Saporta.)

Atlanta Mayor Andre Dickens, who participated in the ribbon-cutting, said the Covenant House serves a special need in the community.

“The Covenant House of Georgia has been at this for over 20 years,” Dickens said. “It is consistently on the front lines of this issue. Unfortunately, COVID-19 made a serious problem even worse. The Covenant House now will be able to offer assistance to even more young people who are extremely vulnerable.”

“This growth allows CHGA to serve an additional 189 youth who are overcoming homelessness and escaping trafficking each year, offering unconditional love, absolute respect, and relentless support to empower their stability,” Redd said.

Ben Deutsch, board chair of Covenant House Georgia, has been on the board since 2012.

“We are offering them a real path to long and fulfilling lives,” said Deutsch, who thanked the donors and fellow board members for the success of the “Building on a Promise” campaign. 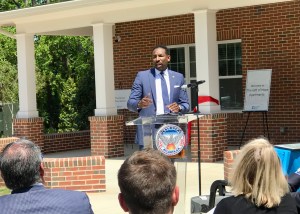 Cooper Carry designed the more than 20,000-square-foot building, which was built by Hogan Construction with Silverman Construction Program Management serving as project manager.

Robert Fink, president of the Gift of Hope Foundation, and his daughter — Donna Vassil, got special recognition, but it was not disclosed how much they contributed to the campaign.

Fink, president of the foundation, said his family learned about Covenant House nationally.

“It’s the biggest movement to take care of homeless youth,” Fink said. “The Covenant House is like a bridge between homelessness and hope. That’s the purpose of our foundation. We look at this like it’s a tremendous bridge.”