Graduation season has started this month with some new adjustments to help prevent the spread of COVID-19.

At many institutions, an in-person graduation ceremony was out of the question for 2020 graduates, and that included me.

In September 2019, I completed the requirements to receive my Master’s in journalism from Syracuse University and planned to throw a party to celebrate with family, friends and classmates in April of last year. 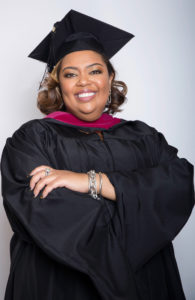 But due to the outbreak of the pandemic, I was forced to cancel my event to prevent any of the people I love from contracting COVID-19.

A year later, though, things are looking different. Many schools are holding in-person graduation ceremonies, and many are allowing those who missed out last year to particulate.

2020 graduate at Clark Atlanta University, Alexis Grace, is one such student. She told SportaReport that her alma mater is “making lemonade out of limes,” as they plan to have the commencement ceremony they intended to have last year.

When asked about the early morning event, Grace said the feeling was “underwhelming” to celebrate an accomplishment one year later.

“I don’t think I would feel any type of way only because I already came to the conclusion that I was not going to have a graduation,” she said. “I’m grateful that Clark Atlanta is giving us the commencement – because we did want one. I just wish it was last year, not this year.”

But that doesn’t mean it’s business as usual. From wearing face masks at all times to temperature checks before entering, most schools will still be following CDC guidelines when it comes to having large outdoor events.

UGA law graduate Sharod McClendon’s sister didn’t have a high school graduation ceremony last year, so he expected to have the same happen to him this year.

“I have dreamed about being an attorney since I was ten years old,” McClendon said, adding that the last few months have felt surreal for him because he is one step closer to fulfilling that dream.

Some notable individuals will give the keynote address at local schools in metro Atlanta. Grace will hear words of encouragement in CAU’s 2020 commencement from former Georgia Democratic Gubernatorial candidate Stacy Abrams and political commentator Bakari Sellers, will speak to the class of ‘21 May 15. 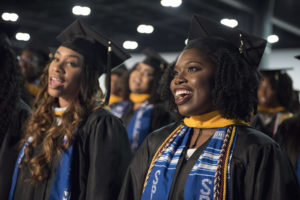 The following day, Just Mercy, author and founder of the Equal Justice Initiative, Bryan Stevenson, will speak to the graduating class in a joint ceremony at Morehouse College. Next door, Black Panther and The Walking Dead star Dani Guria and author and civil rights activist Angela Davis will give encouraging words to the graduates at Spelman College on May 16.

UGA School of Law has not finalized their plans for their May 22nd commencement.

Due to the restricted number of guests to attend this year’s graduation ceremonies, schools have arranged to live stream their festivities. To find out how you can watch an upcoming graduation ceremony, look on the school’s websites and social media platforms for more information.