Craig Menear to be CEO of the Home Depot Nov. 1 when Frank Blake retires

The Home Depot will have a new CEO — Craig Menear — beginning Nov. 1.

Frank Blake, who has served as the company’s CEO for nearly seven years, will be retiring on that day, but he will remain as chairman of the home improvement company.

Menear is being promoted from his current role as president of U.S. retail, a position he has held since February of this year when it became apparent he would be Blake’s successor. Two other internal candidates were being considered for the top job — Carol Tomé, the long-time chief financial officer of the company; and Marvin Ellison, executive vice president of U.S. stores.

In addition to taking over as CEO on Nov. 1, Menear also will assume the title of president, according to a release issued by the company after the market closed on Thursday. 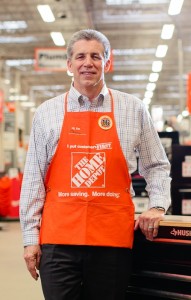 Of his 34 years in the retail and hardware home improvement industry, Menear has spent more than half of them with the Home Depot. He is responsible for the company’s U.S. retail business, which includes the operations of nearly 2,000 stores, the company’s fast-growing online business, merchandising, marketing and supply chain.

“Craig has taken on increasing leadership responsibility over the last several years and has excelled in all his roles,” Blake said in the release. “As a long-time Home Depot veteran, Craig lives our values and embodies our culture. He’ll do an outstanding job leading our company in the years ahead.”

In many ways, Menear might find it a bit difficult following in Blake’s footsteps because he has been a most popular and successful CEO.

Blake took over as CEO in January 2007 after the forced departure of Bob Nardelli, who had had a tumultuous tenure running the company. Nardelli had been the first non-founder of the company to run the company — following co-founders Bernie Marcus and Arthur Blank at the helm.

Blake also took the hot seat just as the country was about to enter the Great Recession — which hit the home-building industry particularly hard. Complicating matters even more, Blake’s background had been as a general counsel and in corporate business development rather than in retail or merchandising. 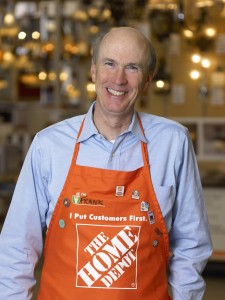 Although some considered him to be a reluctant and even tentative CEO, Blake quickly gained respect and admiration both inside and outside the ranks of the company.

Two of the first calls he made on his first day as CEO were to co-founders Marcus and Blank, inviting them back into the fold and re-embracing Home Depot’s culture that had been created by the founders and their associates.

“On behalf of the board, I want to thank Frank for the job he has done over the last seven years,” said Greg Brenneman, the board’s lead director. “Among his many accomplishments, Frank has built a world-class leadership team. We are fortunate to have a leader of Craig’s capabilities as our new CEO.”

In fiscal 2013, the Home Depot had sales of $78.8 billion and earnings of $5.4 billion. The Home Depot’s stock is traded on the New York Stock Exchange (NYSE: HD) and is included in the Dow Jones industrial average and Standard & Poor’s 500 index.

Previous Article
City did not err in issuing demolition permit for historic building in King district, but preservationists still hope it can be saved
Next Article
Column: Sarah Kirsch to lead Urban Land Institute’s Atlanta district