By Guest Columnist CHANTELLE RYTTER, community parade artist and captain of the Krewe of the Grateful Gluttons (founder of the BeltLine’s Lantern Parade)

In 2010, Art on the BeltLine gave a call for proposals for visual and performing art projects to happen on the interim trails of the Atlanta BeltLine. This was when the Eastside Trail was that dark creepy place behind the dumpsters. Pricilla Smith, executive director of Eyedrum and one of the Art on the BeltLine founders, called me and suggested I propose a parade.

Priscilla knew the Krewe of the Grateful Gluttons from our participation in the Little Five Points Halloween Parade and Inman Park Festival Parade. More importantly, she knew that the idea of civic play — making people active participants in the culture of their city — was the fuel that drove me. 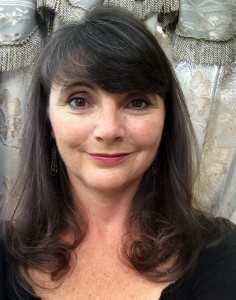 I asked Priscilla if we could have a night parade and the answer was yes! I had wanted to bring a lantern parade to Atlanta for a long time…one that would have the potential to capture the imaginations of a broad spectrum of participants and become a tradition. I applied for the grant.

The BeltLine was so perfect for a lantern parade. Holding up a light is a universal gesture of faith and support, a symbol of community around the world.

Atlanta needed to believe that the creepy place behind the dumpsters would become our country’s best urban renewal project. We need to hold up a light for the BeltLine for the next 20 years. It was a great opportunity for a participatory art project to really serve our community and perhaps become part of the cultural fabric.

I gleaned ideas from international lantern parades, invented lantern forms, and drew inspiration from New Orleans second line parades, where anybody can be a part of the fun. Everyone is invited to make a lantern and jump in behind the band in our parade. It isn’t come see the parade, it’s come be the parade. There is no parade without you. 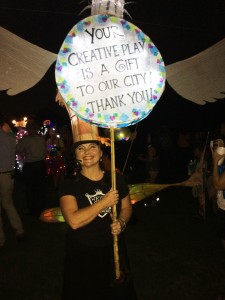 Cnantelle Rytter holds her own lantern thanking Atlantans for their creations

The first year of the parade, if 100 people came, I would have called it a wild success. We had lantern workshops for 80 people, and 35 Krewe members including the first two giant puppets.

The night of the parade, 500 people showed up with lanterns! We walked two miles down the dirt road through the mud and weeds. There was one wheelchair with us that we had to lift over the puddles. It was the largest number of people ever on the BeltLine. We had a blast and everybody loved it.

In 2011, I applied for the Art on the Beltline grant again to celebrate the opening of the Old 4th Ward Park with the Lantern Parade. We paraded around the lake, again with 500 people. I applied again in 2012, angling to make it a tradition. That year, 1,200 lanterns marched down the Eastside Trail, and we added a second pair of giant puppets.

In 2013, Art on the BeltLine moved the Lantern Parade into the Permanent Collection and out of the grant competition. I had lantern making workshops with 160 folks and more than 10,000 came out for the parade. We were stunned.

The game changer this year was that George DeMeglio gave us his house to host as many lantern workshops as I wished. The space was idle, waiting on renovations to become Il Gusto Bistro in the fall of 2015.

We affectionately named it Lantern House. I had lantern workshops with 566 of the sweetest people, making fantastically individualized lanterns to take part in a collaboration with thousands of strangers, people they share a city with. 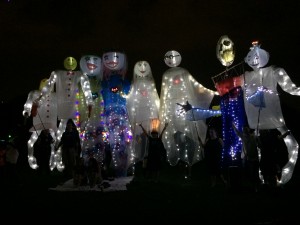 It has been amazing to watch this grow, to see how its sentiment has come to operate on a civic level. Where people look at your lantern and say, “That is so beautiful! Did you make that? Wow. I love Atlanta!”

Your creative play is a gift to our city. Your lantern, your time spent with scissors and glue, your presence – makes people feel a great love for our city. This is civic play. It delivers the gift of civic kinship, fostering enduring bonds between people and place. I started using these terms, civic play and civic kinship, to try to describe what happens in New Orleans. I am so tickled to be talking about Atlanta this way.

I’m super excited to be speaking more about this topic next month at TEDx Peachtree, one of Atlanta’s independently organized TED events. The theme this year is Illuminate – how perfect is that?

Looking forward – the lantern Parade is the Saturday after Labor Day, in perpetuity! That makes the next one September 12, 2015. Next year, I sure hope another Lantern House comes our way and I hope anyone who didn’t have a lantern makes one!

Chantelle Rytter will speak on the topic of civic play at TEDx Peachtree at the Buckhead Theatre on October 17.