Crosswalks. Some would rather watch paint dry than talk about crosswalks.

But well-designed crosswalks can make all the difference in the world when it comes to developing a city that welcomes pedestrians.

Atlanta’s crosswalks — or lack there of — is one of my pet peeves. There’s probably no better barometer about how pedestrian-friendly a city is than the way it designs and maintains its crosswalks.

Friends of mine roll their eyes when I start talking about the beauty of painted piano keys that safely outline the space reserved for those walking from one side of the street to the other.

Those wide white-painted stripes command respect for pedestrians and clearly communicate to cars their boundaries. 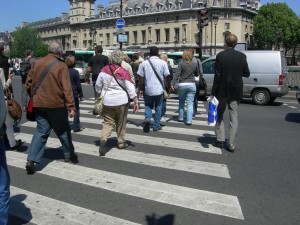 In Paris along Boulevard St. Michel, pedestrians cross the street towards the River Seine. (Photos by Maria Saporta)

To reinforce the message, some cities change the pavement type right before a crosswalk by putting several feet of rough stones, causing drivers to put on their brakes without even realizing it.

In the United States, all too often, our streets are designed for cars with smooth pavement so drivers can have as comfortable (and speedy) a ride as possible.

(I’ll never forget visiting with a transportation planner in Belgium 30 years ago who showed me a street designed with several obstacles — sharp turns, zig-zags and changes in pavement — forcing cars to slow down for the safety of pedestrians). 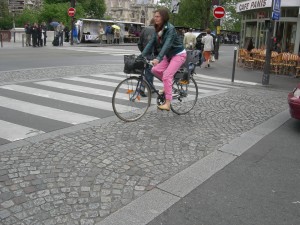 A crosswalk in Paris with cobblestones before the painted bars — alerting drivers that they should come to a stop.

It’s counter-intuitive to our culture to design our streets for pedestrians, cyclists and transit — especially if those modes hinder the ease of travel for cars.

And yet, we wonder why our cities don’t have that human touch — why people seem to be second-class citizens to our automobiles. 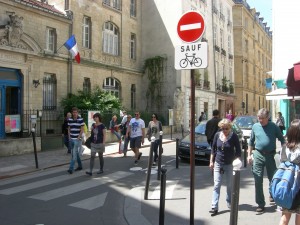 But if you bear with me, you too might see the beauty in wonderful crosswalk design. 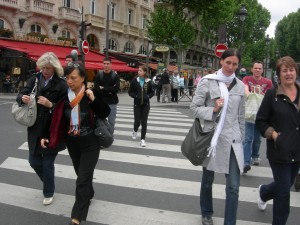 In Paris, pedestrians cross a street near Notre Dame on Sunday morning.

Some could argue the chicken-and-egg argument. Does Paris have great crosswalks because it has so many pedestrians? Or are there more pedestrians because there are well-marked crosswalks?

Of course, a city’s street-level experience is far more multi-dimensional than how a crosswalk is painted. But I would argue that there are few initiatives as easy and as cheap that a city can take to become more pedestrian-friendly. In other words, if we want to become more people-oriented, crosswalk design is a good place to begin. 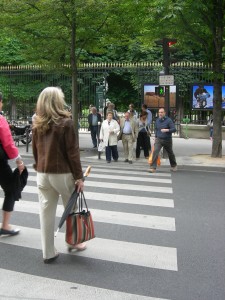 Pedestrians in Paris walk across a major street to get to the Luxembourg Gardens.

In the last few years, a less-than-satisfactory agreement was made with the Georgia Department of Transportation to adopt a ladder design for crosswalks on state roads. That design has been adopted on many other streets as well.

The argument for this “solution” was that cars would have plenty of space to ride over the crosswalk without rolling over the paint lines, which would reduce maintenance costs. 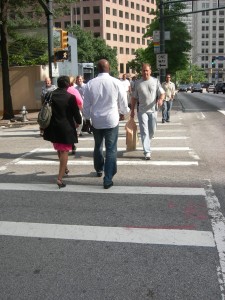 Atlanta\’s version of a crosswalk — this one along Peachtree Street downtown.

But as you can tell from the photos, this solution isn’t working. Even when fully painted, the crosswalks don’t give pedestrians a sense of protection. And often drivers ignore that the lines (or pedestrians) are even there, especially when making that all-too-dangerous right-turn-on-red. 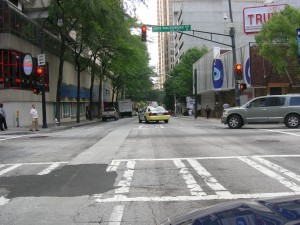 The problem could become even worse than that.

After several years with some improvements in pedestrian safety, we might be slipping backwards.

In the most recent newsletter of PEDS, the pedestrian advocacy organization, a reference was made about the possibility of removing crosswalks altogether at intersections of thoroughfares not controlled by traffic signals.

If that policy change gets implemented, streets like Ponce de Leon could end up not having any crosswalks for blocks — a move that would increase jaywalking and the likelihood of accidents between pedestrians and cars. Certainly, that’s not a positive direction for us. PEDS is working with the Atlanta Regional Commission to make sure pedestrian safety is taken into account. 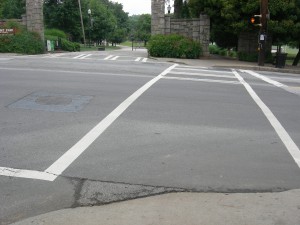 Crosswalk across 10th Street going to Piedmont Park. Little attention is made to repainting crosswalks once the paint wears out or when a road is repaved.

Given the power of the automobile in our society, we must be ever-vigilant that pedestrians are not run over by transportation engineers wanting to design streets primarily for cars.

We must keep working towards the day when our streets are designed for feet first before moving up the food-chain to bicycles, mopeds, motorcycles, cars, trucks and buses.

To get there, many factors are important: the type of traffic signals that are installed; wide sidewalk; medians where pedestrians can pause while crossing a multi-lane street; handicapped access with safe curb-cuts; bicycle lanes wider than a couple of feet; comfortable bus stops with seating; the list goes on.

In the meantime, I’ll keep talking about crosswalks — well-painted crosswalks with long, wide bars that can serve as stepping stones across our busy roads.