Under I-85, DOT linking Atlantans to nature and BeltLine

The unfinished trail is bordered in part by cedar trees native to the Himalayas. It runs by a creek where, on a recent morning, fallen leaves floated like boats and a blue heron glided gracefully over the water.

Welcome to the new Creekside Trail, a transformative project by the Georgia Department of Transportation to turn a half-mile of scrubland north of Lindbergh Drive into a hiking path. 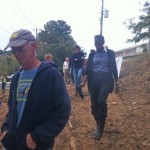 The trail, between I-85 and the North Fork of Peachtree Creek, is the first nature trail built by the state transportation agency. It reveals more than just a small oasis right under the tires of thousands of daily commuters in Atlanta. It’s a spawn of the mothership BeltLine, a secondary trail that is supposed to beckon Atlantans out of their cars to walk or bike to work in Buckhead and northeast Atlanta.

“It’s cool because you’ll have the BeltLine and then you’ll have the fork that comes out that leads to (north Buckhead) and then out to Emory,” said Ruthie Norton, senior project manager for the Mayor’s Office of Sustainability. “Eventually you’ll be able to …. commute in without breathing in the tailpipe.”

Multiplying trail links to the BeltLine

Norton was among a group of city and state officials and members of environmental advocacy groups who recently toured the new trail. She was referring to the multi-use PATH400 Trail and the series of connecting trails being built by the South Fork Conservancy as well the existing PATH Foundation’s Stone Mountain Trail. 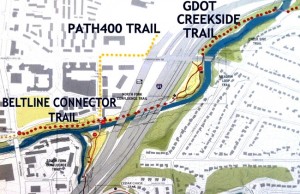 The new Creekside Trail is one of several nature paths and multi-use trails that will eventually be linked to Atlanta’s BeltLine.

GDOT deputy press secretary Jill Goldberg said the agency is building the Creekside Trail as part of an agreement with area residents to provide “vision mitigation” for a new flyover bridge being constructed at I-85 and Ga. 400.

When the $1 million project is completed sometime in mid-January, residents of the Lindridge and Martin-Manor neighborhoods will have a new short nature walk. Later, when a downstream path under Ga. 400 is completed, it will be linked to Atlanta’s BeltLine.

Paths like the Creekside Trail serve as a reminder that the BeltLine redevelopment is doing more than creating a potential transit/trail link for the 45 neighborhoods it touches.

The BeltLine, a $2.8 billion plan to build a continuous 22-mile light rail line and a companion multi-use trail along the abandoned 19th century train route, is becoming a catalyst for other trail projects.

The 5.2-mile PATH400 Trail, expected to begin construction in 2014, will run beside and under Ga. 400 as far as north as Loridans Drive. The connecting nature trails being built by the South Fork Conservancy, which are not paved, will link Emory University with the Lindbergh area. The PATH Foundation projects are paved. 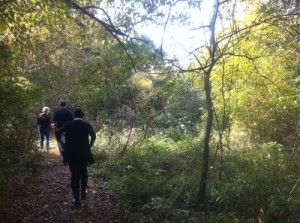 The Meadow Loop Trail, built by the South Fork Conservancy will be connected to the Creekside Trail by a bridge that will run underneath Lindbergh Drive.

The two trail systems will meet near the confluence of the north and south forks of Peachtree Creek.

Some supporters of the Peachtree Creek trail projects say they serve less of a transportation purpose than the PATH Foundation projects. The trails’ main purpose is to serve as a means to repair streams and connect people with otherwise inaccessible natural settings in urban areas.

“It’s the adventure in your backyard,” said author David Kaufman. “I think the challenge is for us to retain the uniqueness of these places while still opening them up for public use.”

Kaufman knows more about the area’s waterways than just about anybody. He wrote “Peachtree Creek: A Natural and Unnatural History of Atlanta’s Watershed,” a book based on his experiences paddling the creek from its headwaters to its end at the Chattahoochee River. 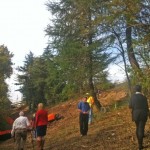 Cedrus Deodara trees, found in the Himalayas, stand on the bank above the new trail, which is scheduled to be completed in January.

At high speeds, motorists on I-85 are unlikely to notice the curving Cedrus-Deodoro trees growing out of the steep bank that separates the emerging 8-foot wide path from the highway. Ditto for the lush meadow on the south side of Lindbergh.

“This nature we didn’t have access to because you couldn’t safely walk here,” said Denise Quarles, director of the Mayor’s Office of Sustainability who took numerous pictures of the trail route with an iPad. “Look at the colors of the leaves that are out there.”

In the gap between the asphalt highway and the water, tour group members watched a blue heron perch on the opposite side of the creek before it flew downstream.

But not all of the experiences of the natural world were genuine.

Moments after Quarles spoke, tour group members heard a duck quacking. It turned out to be a cell phone ringing.