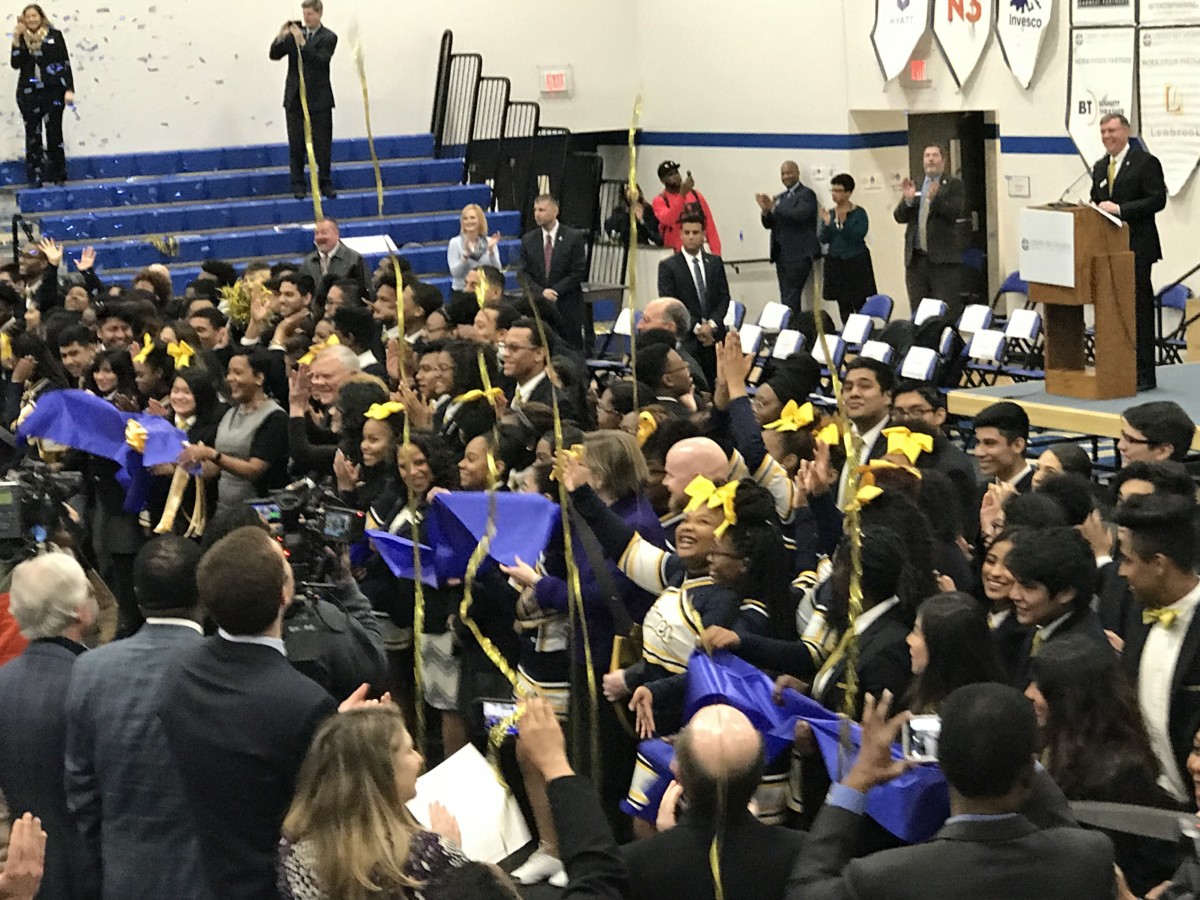 Top dignitaries – Georgia Gov. Nathan Deal and Atlanta Mayor Keisha Lance Bottoms among others – attended the “miracle” of Cristo Rey Atlanta – a Jesuit high school that will graduate its first class in May. 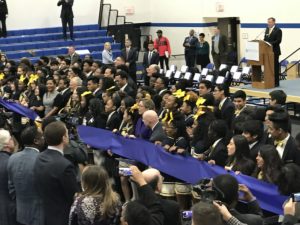 Deal thanked all the people and institutions that led to Cristo Rey being able to dedicate its new downtown building, but he reminded the audience why they were there.

“Turn around and look at these students,” Deal said as the enthusiastic students cheered.

Cristo Rey Atlanta is part of a network of 32 schools around the country that offer a unique educational experience for students with financial and social challenges. Students have jobs while they are going to school. And virtually all of Cristo Rey’s graduates go on to get a college education.

Jahari Fraser, a senior who is the 2017/2018 student council president, is no exception. As one of the dedication ceremony’s emcees, Fraser told the audience he was headed to Bard College, where he will study computer sciences and human rights.

Archbishop Wilton Gregory, the Archdiocese of Atlanta, said the idea for the high school hit him the moment he landed in Atlanta on Dec. 8, 2004.

“I knew as the plane touched down that Atlanta needed a Cristo Rey,” Gregory told the gathering in the schools new gym and assembly area. “Today we celebrate all these people who have come together. I thank everyone who helped make this possible – Catholics and non-Catholics.”

Gregory did mention that he invited the Jesuit organization to come to Atlanta before the election of Pope Francis, who also is a Jesuit. 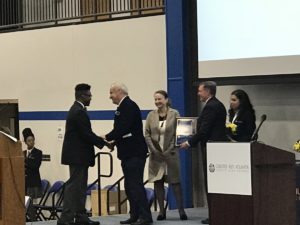 The other emcee was Elizabeth Rodriguez, a junior who is vice president of the student council and will follow Fraser as president next year.

She was offered an opportunity by the Western Golf Association to work as a caddie in Lake Forest, Illinois for seven weeks during the summer. Once she participates in that program, she then becomes eligible to apply for the Evans Scholarship – which would be a four-year grant to go to college. Garrett helped convince her hesitant family that accepting the Western Golf Association summer opportunity would be a smart move and could end up covering her college education.

“Let’s meet the man who won’t take ‘No’ for an answer – Bill Garrett,” Rodriguez said.

Because Garrett wouldn’t take “No” for an answer, Cristo Rey was able to raise $30.3 million for its new school building capital campaign, which included the renovation of the office building as well as constructing a parking facility and the new gym and assembly hall known as the Robert M. Fink Family Gymnasium.

But one of the biggest success stories is the partnership Cristo Rey has formed with 137 companies and organizations that are providing jobs for its students. Each entity signs up to nurture and mentor at least four Cristo Rey students. 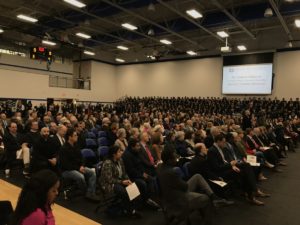 A full gymnasium of Cristo Rey’s students, faculty and friends are on hand for the dedication (Photo by Maria Saporta)

“We are the only (Cristo Rey) school in the nation where everyone of our students are in paying jobs,” Garrett said.

One special guest in attendance was Father John Foley, founder and chair-emeritus of the Cristo Rey network of schools.

“Atlanta is doing extremely well,” Foley said. “They are a poster school for our network of schools. They are strong across the board – tremendous in academics and their presence in the city. They’re right in downtown Atlanta, and their name is on top of a gorgeous building. Bill Garret is such a winner.

“Who would have believed that so many good people would come together to create this school,” said Foley, who added that he wanted the Cristo Rey schools to help students in need (through no fault of their own) be able to succeed. “There’s so much God-given talent that’s not being given a chance to bloom. God doesn’t want that.”

And then he added that at Cristo Rey Atlanta, students are being given an opportunity to bloom. 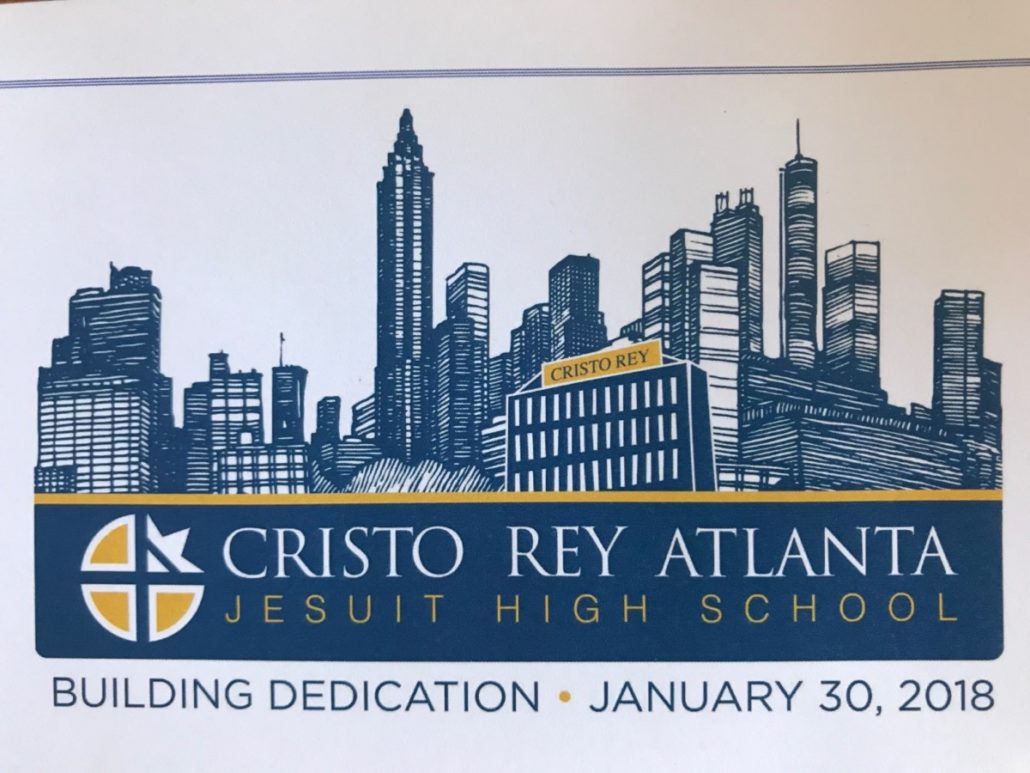 Invitation to the building dedication of Cristo Rey Atlanta 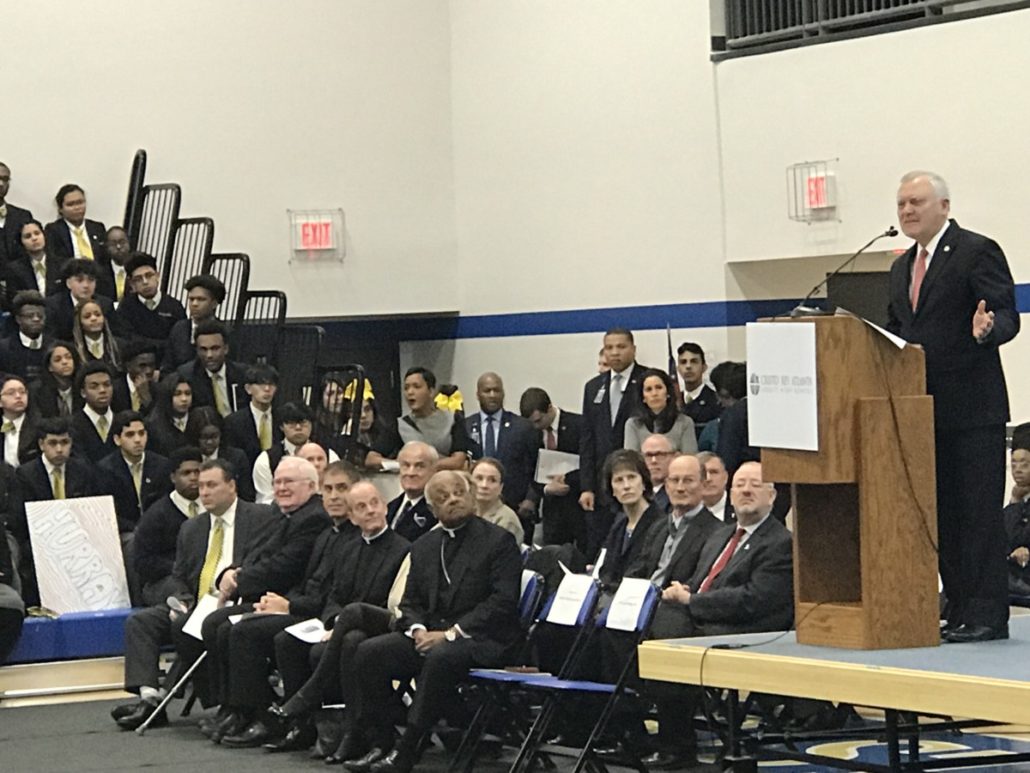 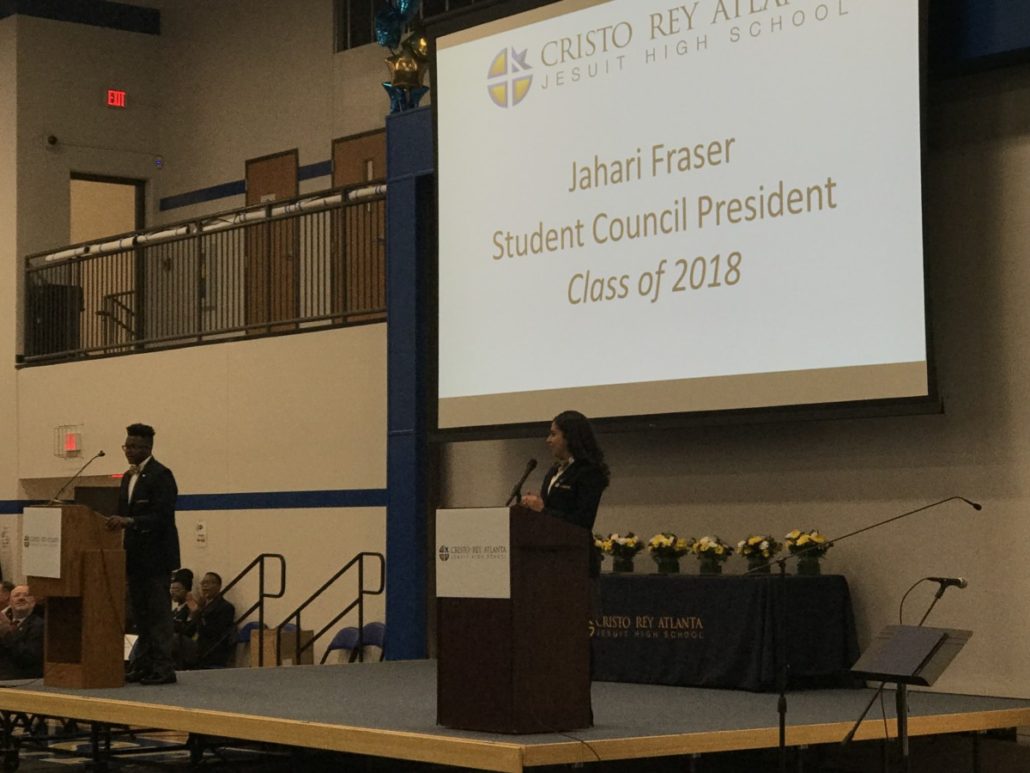 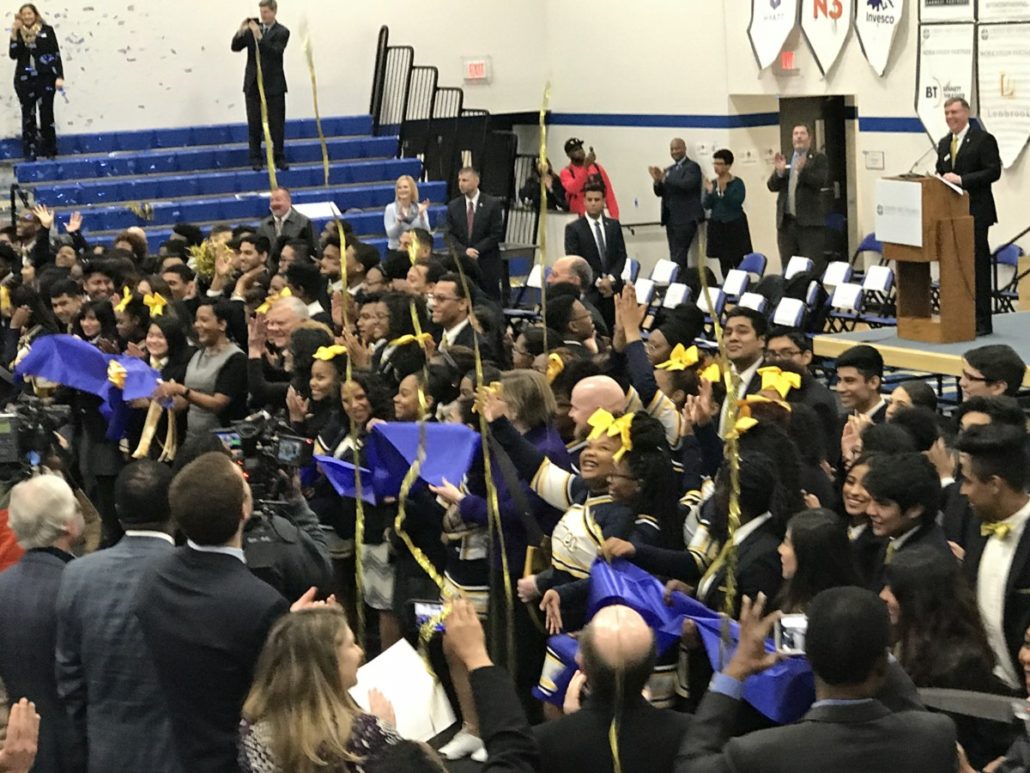 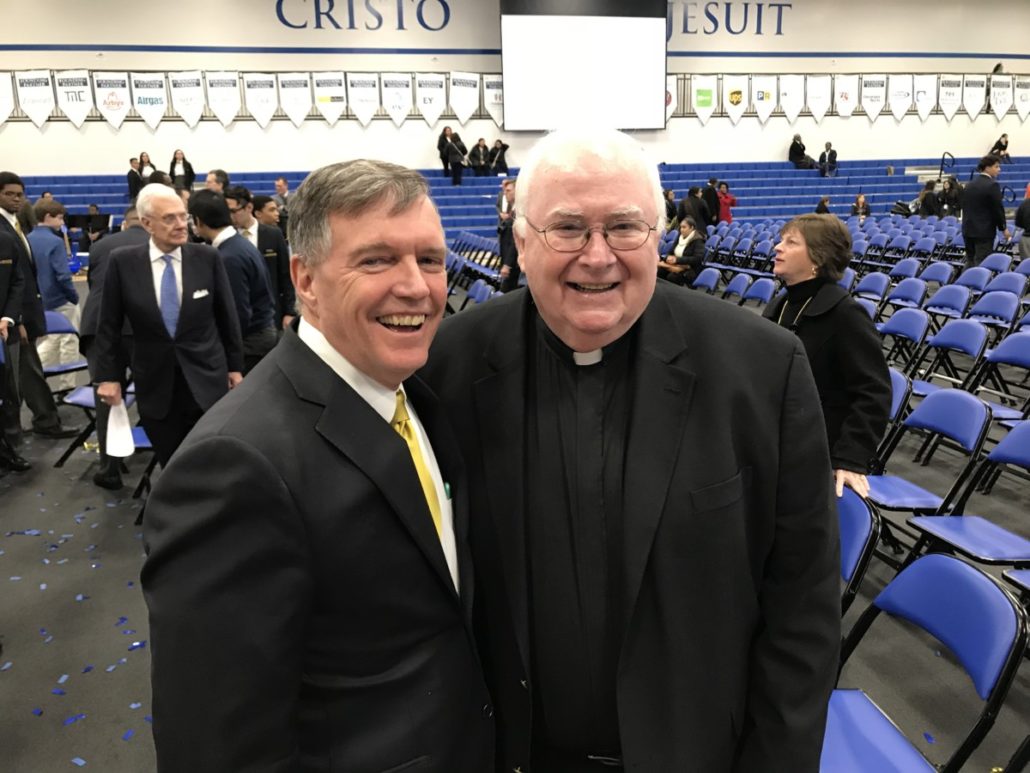