A spotlight is on the North Atlantic right whales in the wildlife conservation community, fueled by the species’ critically endangered status and a recent proposal to expand protections along the waters of the East Coast.

Senior Wildlife Biologist Clay George has spent many hours researching the species through his work managing the Georgia Department of Natural Resources (DNR) marine mammal conservation program. For George and his partner, research technician Trip Kolkmeyer, that means tracking and collecting data on aquatic mammals along the coast, like manatees, bottlenose dolphins and right whales. They also offer much-needed aid to animals that have become entangled in fishing gear.

The whales’ population is alarmingly low, with an estimated 340 left and 80 females who can reproduce. In the fall, the species migrates from the coast of New England and Canada to the warm waters near Georgia, South Carolina and Florida where they birth and nurse their young. They face two major, human-induced threats on their journey down the East Coast — collisions with ships and fishing gear entanglement.

During an aerial surveillance flight last year, George’s team saw something shocking — a North Atlantic right whale with fishing rope entangled in her mouth, followed by a young calf.

“We've never had a case of a chronically entangled whale with a calf next to it,” George said. 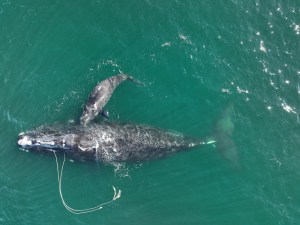 The animals often become evasive once entangled, he explained, so the team used drones to get a closer look at the whale, now nicknamed Snow Cone.

“We were able to assess that it was a very complicated entanglement. The calf was interacting with the rope,” he said. “On top of that, [Snow Cone] had a scar across the top of her head and it looked like there could be rope embedded in that — almost impossible to rectify because the rope’s essentially embedded below the surface.”

George continued: “Unfortunately, in the end, we decided — over the course of a month of spotting her and the calf — there was nothing we could do to benefit her that wasn't also really risky for the calf.”

In other, more gratifying instances, the team can swiftly assist the entangled whale by cutting the rope short, and planting a temporary tracking device if needed.

But these rescues can only do so much. The aquatic giants should live up to 100 years but, according to George, are instead “only living a few decades.”

Between the exceedingly shortened lifespans and fewer calves being born, scientists are concerned about the future of the species. Before 2010, researchers tracked around 24 calves each year but since then, only about 12 have been spotted annually.

“We had zero calves a few years back, which was extremely concerning. That was the first time that's ever happened,” George said. “What we know from the population models, they would have to be producing 50 calves a year right now for the population to grow, and that's just not possible.”

Additionally, rather than having a calf every three or four years, increasingly more females have eight or nine-year gaps between rearing their young.

“We're speculating that they're not getting enough food to calf at the normal interval,” George said. “If they're dying at faster rates than normal, it's cutting into their lifetime reproductive output. They're just not able to produce enough calves to offset the losses. It's a concern, obviously.”

One potential solution is on-demand fishing — a method that uses no or minimal rope — by attaching the fishing gear to a buoy that, when inflated, comes to the surface. The technology has been researched predominantly in the Northeast, where the fishing practices with long, vertical lines cause more entrapment issues than in the Southeast. As part of NOAA’s recent proposal, the agency drafted a Ropeless Roadmap which outlines strategies to further develop on-demand fishing. 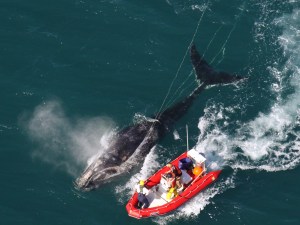 To further protect the critically endangered aquatic mammal, George would like to see more regulations around lobster and snow crab fisheries — like seasonal restrictions or more conservative rules regarding the number of approved trap pots — primarily in New England and Canada.

“[The fisheries] use very large numbers of pots that are strung together with a ground line, and they have buoys on each end. Sometimes these can be a quarter mile long — it’s a lot of gear,” George said. “NOAA has estimated that in Canada and New England during the summer months, there's upwards of a million pots in the water, and all of those are connected by rope.”

To prevent the right whales from going extinct, George emphasized that we need strong protections for the gentle giants, rather than responding to emergencies as they come.

“If this species is going to survive, we're going to have to continue being quite conservative about how we manage activities, here and in the calving grounds. We know we're only seeing a fraction of the whales that become entangled or get hit by vessels, so the focus has to be on prevention.”

If you’re interested in learning more about the status of the North Atlantic right whale and NOAA’s recent proposal, click here. You can also click here to submit a comment regarding the proposal before Sept. 30.