Last winter, the internet was flooded with images of a North Atlantic right whale — nicknamed Snow Cone — swimming alongside her calf. Why? Because she had about 20 feet of fishing rope dragging from her mouth. Scientists were “surprised and concerned” about the birth because the calf could easily become entangled in the rope. This is just one of the countless examples of the dire situation the species faces.

Last week, National Oceanic and Atmospheric Administration (NOAA) Fisheries introduced a proposal to expand protections for the critically endangered North Atlantic right whale. The changes would significantly broaden the boundaries of the current seasonal speed restriction areas, which require boats to go slower in certain areas, and increase the number of boats the restrictions apply to.

With an estimated 340 North Atlantic right whales left — and only about 70 females who can reproduce — scientists and environmental advocates are concerned that the species could become another bullet point on the list of extinct species.

The two primary causes of the critically low population are collisions with ships and fishing gear entanglement. According to NOAA, when the cause of death could be determined, all juvenile and adult right whale deaths between 2003 and 2018 were due to human activities.

North Atlantic right whales live along the coast of New England and Canada during the summer, and in the fall they migrate along the East Coast to the warm waters near Georgia, South Carolina and Florida to birth and nurse their young.

They swim close to the coast, explained Southern Environmental Law Center (SELC) Science and Policy Analyst Melissa Edmonds, which leaves the whales vulnerable to collisions with large boats or entanglement in fishing lines. 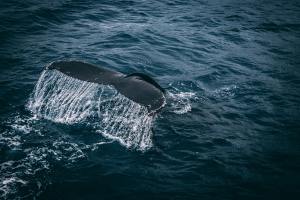 The North Atlantic right whale is one of the world’s most endangered large whale species. (Photo by Rudolf Kirchner, Pexels.)

“Those two compounding threats are killing and seriously injuring these whales at unsustainable rates,” Edmonds said. “They cannot manage this level of mortality if they’re going to recover.”

Due to climate change, their migration patterns are becoming increasingly unpredictable, she added, making protections for the aquatic mammals all the more critical.

Under the new proposal, vessels 35 feet and longer will have to travel at 10 knots or less in the seasonal speed zones. The current regulation only applies to ships 65 feet and longer. These restricted speed zones are also significantly expanded under the new proposal, offering protections along the migratory strip near the coastline, rather than only around port entrances.

Edmonds said the SELC team is “thrilled” about the increased protections, but there are some adjustments they’d like to see.

“The increased protections are much needed, and frankly, long overdue,” she said. “We’re still digging into the details and the analysis of the rule itself, but on its face, we’re thrilled to see more protections, stronger protections. But there’s still room for improvement in some smaller areas of the provision.”

For example, dynamic speed zones are implemented when the whales are found outside of their regular migration route. Under the proposal, three whales must be spotted together to trigger the dynamic speed zone. SELC would like to see this number reduced to two whales. 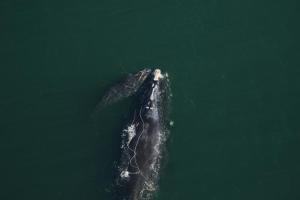 Mother-calf pairs, like Snow Cone and her newborn, are particularly vulnerable to collisions with ships. (Credit: Florida Fish and Wildlife Commission taken under NOAA permit #20556-01.)

“The whales are very unpredictable now so this dynamic speed zone provision is really crucial in covering that gap and making sure that whales outside of those areas are still protected,” Edmonds said. “Three whales might be too high of a bar to protect them, especially for moms and calves. If a mom and calf are together that means they’re probably nursing or they’re probably going to be there for an extended period of time, doing important things to further their generation.”

NOAA also released a Ropeless Roadmap, exploring ways to develop on-demand fishing without the lines. This technology has been researched predominantly in the Northeast, where the fishing practices with long, vertical lines — like lobster and trout pot fisheries — cause more entrapment issues than in the Southeast.

“[On-demand fishing] has been studied extensively and pioneered mostly in the Northeast. It’s not quite as ready for action as the ship strike rule is,” said Sierra Weaver, senior attorney and leader of SELC’s Coast and Wetlands Program. “They’re both needed to protect the species and allow them to recover going forward. But we’re most excited about the opportunity to get protections on the ground right away because we need to act now to save the species.”

The work to protect these animals isn’t done, and with our Southeast waters acting as a nursery, Weaver said our duty to protect the North Atlantic right whale is even greater.

“[The Southeast] is really the home to the future of the species as its only known calving grounds,” she said. “That tells you how much of an impact we have on them, and what an opportunity we have to see them, be inspired by them and be excited when they come to visit us every winter.”

The comment period for the proposal will be open until Sept. 30, only one month before the calving season starts. The SELC team hopes the new rule will be passed as quickly as possible, offering immediate protections for the species.

“If we’re looking at this calving season, in particular, it’s going to be a really important time for outreach and education,” Weaver said. “Just making sure folks are aware of what’s happening and that the whales are there. Folks out on the water tend to be folks who love the water and love everything in it. Nobody wants to hit a whale. [People] are going to do what they can, as long as they know how to take action.”