No quit in football team of Atlanta immigrants

Down 41-0 at halftime Friday night, the Cross Keys Indians could have easily folded. They had every reason to be discouraged: They haven’t had a winning season since 1994. They haven’t won a game since Sept. 16, 2011. 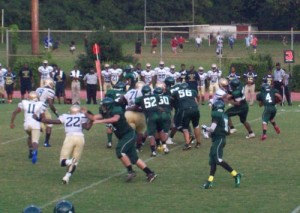 The Cross Keys Indians, in green, on offense in a conference opening 48-0 loss to B.E.S.T. Academy. The Indians are among the most winless teams in Georgia, but epitomize the never-say-die spirit of football players in the South.

But these sons of immigrants, first generation Americans and football players, never fold. Just as their parents haven’t given up on building a good life in a sometimes inhospitable land of opportunity, so too, it seems, these teenagers keep believing they can master a game that was alien to them as children.

“Giving up is for punks,” said senior quarterback and free safety Oluwatomi “Tomi” Adedayo, whose team of 37 players includes 16 born in Asia, Africa, and Central America. “You start to give up and they’ll see it in your eyes. So you just keep your head up and you keep fighting.”

Nestled just off Buford Highway in Brookhaven, Cross Keys is the most ethnically diverse high school in Georgia, one attended by students from 45 countries, who speak 65 languages. Before joining the team, hardly any of their current players had heard of the Statue of Liberty play or went out for youth football or even played pickup in the back yard with the funny-shaped pigskin ball. 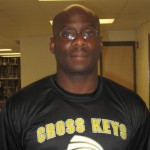 For example, sophomore Chuansheng Fu from China showed up for tryouts thinking it was for the other sport known everywhere but here as football. Coach David Radford took him anyway. Fu plays offensive line and linebacker.

“When it comes to winning, these are not the best of athletes,” said Radford, who coached at two other schools before Cross Keys. “One thing I can say about them is they are the best kids I’ve ever had as far as character goes. They have this fight about them.”

“Many of them are not citizens. Many of their parents are working hard to survive,” Radford said. “They have a fight about them that may not translate to football skills but it does translate to having a lot of heart.”

While getting hammered Friday night, the Cross Keys Indians never seemed to act like a losing team. Even though they couldn’t match the speed of the B.E.S.T. Academy Eagles—an Atlanta Public Schools team from Hollowell Parkway—the Cross Key defenders not once appeared to give up chasing down a ball carrier with an open path to the goal. They didn’t pick fights or hang their heads.

Adedayo, who last season led the team in rushing with 491 yards, scrambled from the opposing team’s rushers all night long. Two upperclassmen on his offensive line were out, one because of root canal surgery, the other because his mom had lost her job and he needed to find work to support the family. Their replacements had never played the game before this season. 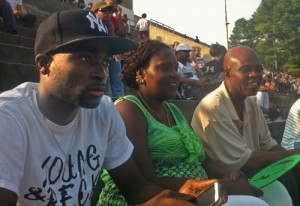 Tobi, Rebecca and Tokoya Adedayo, family members of Cross Keys quarterback Tomi Adedayo. The Adedayos are originally from Nigeria. Their son leads a team that represents the most diverse high school in Georgia. Of the 37 players on the team, 16 were born outside the United States.

Oluwatomi Adedayo was born in the United States after his parents Rebecca and Tokoya emigrated from Nigeria. They left the African country in 1985 so Tokoya Adedayo could attend the business program at Atlanta Technical College. They originally intended to return to Africa, but stayed in Atlanta and became U.S. citizens after the birth of their first child. Tokoya Adedayo now works as a pharmacy manager.

The couple and Adedayo’s older brother, Tobi, watched the game from the bleachers at DeKalb County’s Adams Stadium Friday night. “I see a lot of progress,” Tobi Adedayo said. “They seem more like they know what they’re doing. Last year they got a lot of holding penalties. They’re acting like they have a lot more self-discipline.”

Radford set a goal for his players to make no more than five penalties a game. Friday night they made four. There were other positive signs. The final score wasn’t as bad as the 2012 conference opening loss to the same team, a 64-0 humiliation. The final score was 48-0, which meant the Indians gave up only a touchdown in the second half.

The team’s situation, Radford said, is better than when he first joined the coaching staff in 2005. Then it wasn’t certain Cross Keys could put 11 players on the field. Nowadays, not only are there enough players, but they’re less often seen putting on their shoulder pads backwards and their thigh and knee pads upside down when they suit up.

So the scoreboard doesn’t reveal the full story of this persistent team. The documentation of the Indians’ win-loss record isn’t a measure of their resolve.

Near the Adedayos sat Phuong Tran, the father of Phillip Tran, an offensive and defensive lineman. Like Tomi Adedayo, Phillip Tran is a first generation American in his family. Phuong Tran, a contractor, moved here from Vietnam in the late 1980s.

“He feels sad when he loses a game,” he said.

When asked why his son doesn’t quit, Tran replied, “He just keeps trying. He just loves the game that much.”

Previous Article
One of King’s dreams came true thanks to my friendship with Yolanda
Next Article
U.S. involvement in Syria — no easy decisions with many great unknowns