Cut a tree, plant a tree to preserve the city in the forest this Arbor Day

The 150th National Arbor Day was on Friday, April 29. (Photo by Unsplash)

The Atlanta-based Peachtree Arborists are on a mission to protect the city’s tree canopy with the help of Trees Atlanta and the Arbor Day Foundation. On Friday, April 29 — the 150th National Arbor Day — Peachtree Arborists kicked off the holiday with a new environmental initiative: plant a tree for each removed.

The City of Atlanta — deemed the city in the trees — has the highest percentage of overall urban tree canopy in the nation at nearly 48 percent, according to a 2018 study. Still, the city is also losing trees at the fifth-fastest pace in the country. Georgia leads the way, losing more trees than any other state. 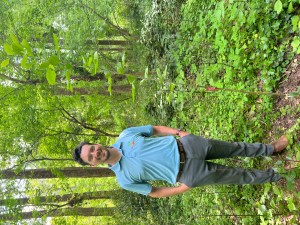 Michael Orme at a planting site in the Fernbank Forest. (Photo courtesy of Peachtree Arborists)

When Michael Orme, an Atlanta native, founded Peachtree Arborists back in 2012, it began as a typical tree maintenance and removal company. But around 2019, Orme started to feel a weight on his conscience.

“I really feel like it’s our responsibility to replant a tree if we’re generating revenue from the removal,” he said. “There hasn’t been a lot of conversations around sustainability in our industry. I have researched this at a national level [and] here’s a strong likelihood that we are the first in the nation.”

The tree count doesn’t start at zero. Orme wants to retroactively plant trees for those cut during their first 10 years. The team recently planted 50 trees in the Fernbank Forest, with about 250 more trees in the pipeline for various places around the city.

Under the new system, clients will work with Trees Atlanta to select the home for the new tree, whether it’s on their property or in local parks and greenspaces around the metro area. The nonprofit will provide regular maintenance to trees planted on public land. 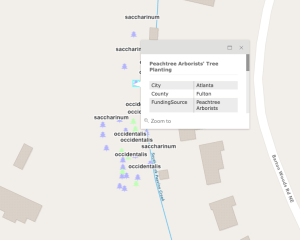 The satellite map includes a breakdown on each tree planted, including the exact location, type, size and more. (Courtesy of Peachtree Arborists)

The company also created a satellite map that will track where each tree is planted, along with quick facts about the leafy giants. The key here, Orme said, is transparency.

“We wanted accountability. How many times have you heard people say, ‘If you do this, we’ll plant a tree,’” he said. “But do you even know where, what size, what type? Did it even happen? So I thought, ‘Let’s get really transparent with this.’”

So, during the month of its 10th anniversary, Peachtree Arborists have made a pledge to plant a tree for each one cut down. Its partner, the Arbor Day Foundation, is also committed to upping the ante.

The Foundation planted 500 million trees over the past five decades, and now it aims to do the same within the next five years.

“[The longevity] really shows how the importance of trees has not been fading, and there’s really never been a more important time to plant trees than right now,” said Matt Spitsen, a program lead at the Foundation. “They’re not the only solution to combat climate change, but they might be one of the easiest solutions.”

Spitsen continued: “It’s a stretch goal, but it’s attainable, as well. We’ll have a concerted effort to plant trees in communities and neighborhoods of greatest need. We’ll also do the same with forests of greatest need, and our reforestation program is going to be looking at forests globally.”

For folks wanting to get involved in protecting the city’s leafy green canopy, Spitsen recommends getting started in your backyard or local park.

“It really starts in your backyard. It’s as easy as that — it’s as easy as planting and caring for trees,” he said. “You don’t necessarily need to be just planting new trees, but also taking care of the existing trees within your community.”

For folks looking for volunteer opportunities in their community, he suggests checking with local organizations like Trees Atlanta or nationwide initiatives like the Arbor Day Foundation.