Cynthia Jones Parks awoke to Moment, prompting her to borrow and invest in middle of recession

During late summer four years ago in the depths of the Great Recession, Cynthia Jones Parks was experiencing a significant drop in her business, Jones Worley Communications. She had prayed for months for God’s blessings and direction, but the downward spiral continued. However, that summer evening, she woke up in the middle of the night and sat straight up in bed when God’s voice whispered into her spirit: “I’ve already blessed you, go do something with it,” He said.

Cynthia, president and CEO of Jones Worley, had been praying for months for projects to help pull her business out of the economic downturn that plagued the country in 2009. Business was slow. Jones Worley was struggling to make payroll, so Cynthia was using her own money to ensure her employees received a paycheck.

“We didn’t have very much business – many of our contracts had been cancelled or were on hold, waiting funding. I didn’t know what we were going to do,” she recalled in the filming of our accompanying HD Moments video.

After receiving God’s wisdom that night, Cynthia had her Moment. As she sat in bed in the dark next to her sleeping husband, the image of her firm’s circa 1910 boutique office building on Piedmont Avenue in Midtown Atlanta appeared in her mind. She thought that by changing the feeling and emotion in the office by renovating the space, she would take the first step to combat the economy’s unfortunate effect on her business.

The lower level of the historic building was especially depressing and negatively impacted the staff’s mood and morale. Chairs and desks sat empty and lights were turned off, creating a less than desirable atmosphere to work in. According to Cynthia, the building, which she purchased in 1996, was desperately in need of a makeover.

The morning after God spoke to her in the middle of the night, Cynthia called her accounting manager into her office to inform her that Jones Worley was going to renovate its building. Her accounting manager quickly reminded Cynthia that they didn’t have any money, let alone money to spend on a renovation. But Cynthia was convinced that her decision would help Jones Worley build itself up from the ground after the recession. She followed her spirit and released any fear she had that was preventing the renovation. Borrowing $50,000 on credit, Jones Worley broke ground on renovation the lower level during the Christmas holiday that year. (Shortly after she invested another $50,000 on the upstairs renovation.)

Once completed, the new and improved second floor, called “Studio 723,” became a creative environment where employees wanted to spend their time, not avoid. Not only do Jones Worley employees get to enjoy the studio that features a kitchen and bathroom and 10 columns supporting high ceilings made of clay tile, other companies, nonprofits and community groups rent the space for meetings and conferences. The custom designed lower level now has state-of-the-art technology, hardwood floors, crystal chandeliers and original art/paintings –painted by Cynthia, who has a bachelor’s degree in Visual Arts from Georgia State University.

After witnessing the positive impact that resulted from the bold risk she took to renovate the office, Cynthia tried to think of other blessings in her life that she wasn’t taking full advantage of. Her firm’s successful branding and launch of the MARTA Breeze Card in 2004 came to mind. With her new bold attitude, Cynthia decided to package and market Jones Worley’s smart card expertise to other transportation authorities implementing smart card technology.

“My firm launched the first 100% smart card in the nation for MARTA. I took that experience, I packaged it, and then I went out and I started marketing that very unique service,” Cynthia said.

Breeze Cards, which resemble credit cards, are the fare media used to access buses or trains in place of tokens or magnetic stripes. MARTA riders can conveniently add value to their cards online or at train stations.

Within a couple years, Jones Worley landed several other smart card projects across the country in San Francisco, St Louis, Pittsburgh, Sacramento and South Florida. “All of a sudden we were back in the game,” she remembered. The new contracts showed Cynthia that blessings can come back twofold. Her communications firm has made a niche in the transportation industry having launched more smart cards than any other marketing agency in the country.

Cynthia depended on MARTA to get to school and work as a young girl. Now, as an adult, she found herself depending on it for much more than a ride, because public transportation ultimately drove her company back to success. Jones Worley’s client base stretches from California to Florida and currently includes leading transportation authorities, Fortune 500 corporations, healthcare, education, nonprofits, and government agencies.

Cynthia Jones Parks’ Moment began in the middle of a late summer night when God spoke poignant words to her that helped her realize she wasn’t taking full advantage of some of the gifts in her life. “Looking back on my Moment, in the depths of the recession, to take a chance and borrow on credit $50,000 to renovate this building was a huge risk for me,” Cynthia said. “But what I’ve learned and the success gained from that decision taught me to take risks and not be fearful. That was my Moment.” 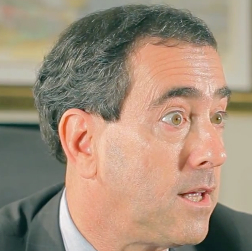 Next week in Moments: David Geller

Next week in Moments: David Geller, who changed his firm’s approach to managing client’s wealth after reading a shocking fact about happiness.