Replica of D-Day cemetery asks: Who is the hero of your story?

For the past nine years, at the end of May, one man’s yard in northeast Atlanta quietly turns into a replica of a World War II cemetery in France. He covers his immaculately trimmed zoysia lawn on Ridgewood Drive with carefully placed white crosses in honor of D-Day. 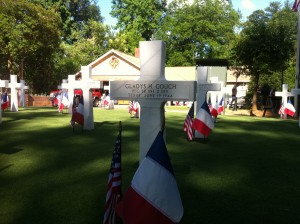 David T. Maddlone, who works at nearby Emory University, always sets up in time for Memorial Day. He wants people not to forget 10,000 men who died on June 6, 1944. When asked to give everything to a cause much bigger than themselves, they answered yes.

Their answer poses this question today: What does it take for someone to be a hero like that — to risk one’s life for the greater good?

“I don’t know if I could,” admitted Maddlone, 53. “That’s the question everyone asks when they see this. We have gotten really comfortable in our lives, and our society has diminished respect for almost anything.”

Sacrifice is never an easy subject; most of our holidays focus on happy celebrations. D-Day is particularly difficult to comprehend. It carries such epic numbers – three times the number who died on 9/11.

“It’s really mind-boggling, especially given all the people who had to tend to the dead and wounded, knowing there was still a lot of fighting left to go.”

The massive number is also hard to absorb because we are besieged each day with messages focusing on a single digit: me, myself, I.

We have the luxury to think of ourselves first because of those who died on D-Day, and in conflicts before and since. They helped ensure that we enjoy comfortable, fairly self-centered lives today.

Maddlone sees that in his visitors’ logbook.

“I hate to see this banter about liberals this or that, and vice versa [about conservatives],” he said. “These heroes fought so you can write that stuff in the book – you can write whatever you want!”

Through the media in World War II — and granted, a good bit of propaganda — Americans were asked to respond to the higher calling of country over self. That message recruited enough American young men into World War II, Maddlone pointed out.

“It would have been hard to convince someone from Iowa to go fight for someone in a mud hut on the other side of the world,” he said. “It was a hard sell, but you had the movie theatres in rural areas, and you had newsreels that were training films for new recruits.”

An old war poster in his visitor kiosk reached out to young women typists of the day with this entreaty: 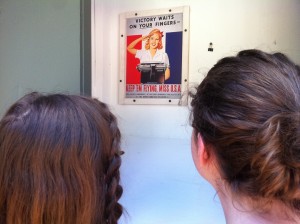 Vintage ads like that are preciously quaint. More and more today, the volume of information coming at us leaves little space for thoughtful reflection on abstract ideals and values. How can our generation aspire to selflessness if we don’t know our innermost selves?

Joseph Campbell, author of “The Hero with a Thousand Faces,” found that across cultures and religions, a person who risks personal safety on behalf of others has followed a path that “fundamentally [is] inward – into depths where obscure resistances are overcome, and long-lost forgotten powers are revivified, to be made available for the transfiguration of the world.”

In today’s world, you may be someone who pays the Ga. 400 toll for the driver behind you. But what if you suddenly came upon a burning car with a stranger in it? Would you react swiftly to save him or her? Would it depend on other criteria — their beliefs, race or station in life?

In such dire situations, a unique group of Georgia residents have reacted so selflessly that their actions were commended by the Carnegie Hero Commission.

They are people like Nathan L. Moore, a carpenter who in 1998 was riding a MARTA bus in Avondale Estates when a passenger began stabbing the bus driver with a knife. Moore got stabbed six times, once deeply in the shoulder, and ended up in surgery. Moore and the driver survived.

What defines people who plunge forward to help when others stand by? That is the question studied by Samuel Olinder, a Holocaust survivor and sociology professor at Humboldt State University in California. He has studied Carnegie Heroes and others he calls “altruists.”

“They are deeply empathetic,” Olinder wrote. “[They] simply could not stand by and see others suffer…. Altruists, unlike bystanders, had internalized the ethic of caring and social responsibility they learned from their parents and significant others. As children, they were likely to have been disciplined by reasoning and taught to consider the consequences of their misbehavior.

“The capacity for love and compassion was yet another important characteristic, as well as a sense of self-esteem and efficacy, [defined as] a sense of self that tells them that they can succeed at some task, even dangerous ones. Ecumenically-inclusive religious or spiritual beliefs, such as regarding all people as children of the same God, worthy of protection and love, are other important factors associated with helping.” 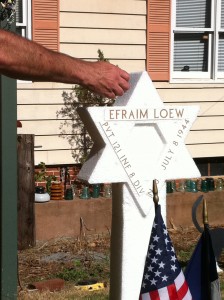 Maddlone observes a Jewish tradition of leaving pebbles to mark a grave. This one symbolizes the French gravesite of American soldier Efraim Loew, who was Jewish and died on D-Day, June 6, 1944.

The transmission of compassion and empathy depends, Olinder noted, on stories. Stories help us answer David Copperfield’s universal question: “Whether I shall turn out to be the hero of my own life.”

The story that inspired Maddlone to create his installation was the Steven Spielberg film, “Saving Private Ryan.”

The “Ryan” story opens with what many veterans call the most vividly accurate depiction of World War II combat, showing American and Allied troops mowed down as they attempted to land on Omaha Beach.

“When I saw the front gates of the landing craft open [as the troops land at Normandy] and everyone is killed, I wept,” Maddlone said. “It did change my life.”

As he stages the scaled-down final scene of D-Day, with white Styrofoam crafted into exact replicas of the stone crosses and stars in Normandy, Maddlone hopes people remember, respect and revere.

Recalling D-Day’s simple message can be difficult amid today’s hectic, complex, individualized way of living, but it boils down to this: Life is not all about any one of us. Today or one day you may be called to help a stranger make it to tomorrow.

How will you answer?

Michelle Hiskey is a freelance writer and story coach based in Decatur. She can be reached at michelle.hiskey@gmail.com

Previous Article
Mayor Kasim Reed on Cyclorama: ‘Doing nothing isn’t an option’
Next Article
City of Atlanta needs to figure out a way to fix its sidewalks and curb cuts