Dan Cathy and Arthur Blank, in a joint appearance, reaffirm commitment to Westside 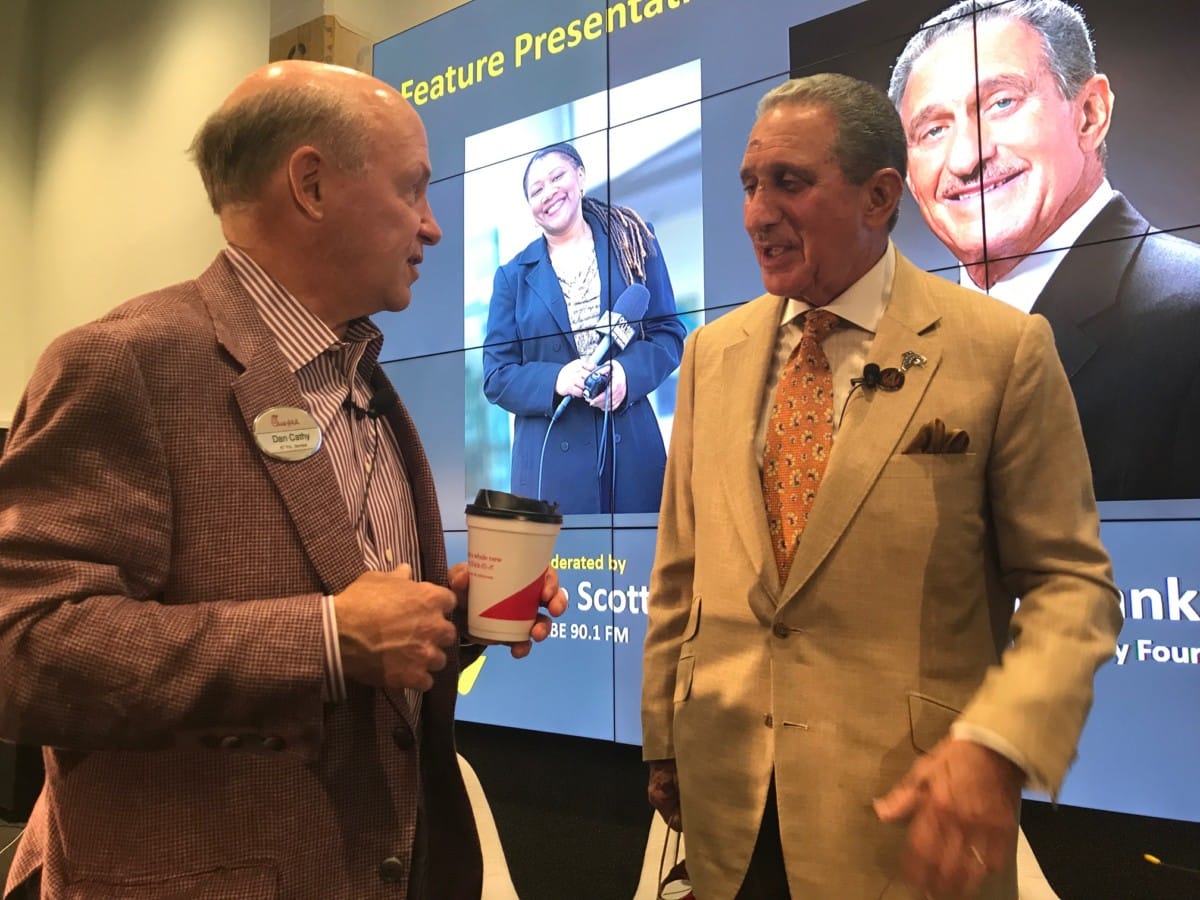 The Gathering Spot at Northyards was jam-packed Friday morning to hear a conversation between Atlanta Falcons owner Arthur Blank and Chick-fil-A CEO Dan Cathy as part of the regular Transform Westside Summit meetings.

Both successful businessmen have made a personal and professional commitment to improve the lives of people living in the neighborhoods west of the new Mercedes-Benz Stadium in some of the most historically-significant communities in Atlanta. 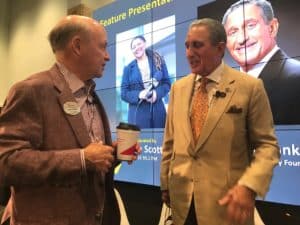 “With success comes a deep sense of responsibility,” said Cathy, who added he’s been inspired by the community redevelopment work Tom Cousins was able to champion in East Lake.

Blank said Cathy was continuing the culture set by his father – Truett Cathy – by seeking to serve others – both in business and the community. It also was a culture that has been central to the Home Depot, which Blank co-founded with Bernie Marcus.

“We are mostly concerned about the people we serve,” Blank said. “We pride ourselves in being great listeners and responders.”

Blank went on to say that his view about what the community needs is not important. What’s important is the views of the people who live in the community.

“It’s also to lift the esteem of the people who live in this area,” Cathy said, adding it was important for the community to be engaged, involved and have as sense of ownership so “the people can determine for themselves how they left themselves out of poverty.”

The Transform Westside Summit has been meeting on the first and third Fridays of every month since October 2015. It has brought together every element of the community – from tenants, students, homeowners, university presidents, foundation executives, churches, business leaders, planners, developers as well as interested citizens. 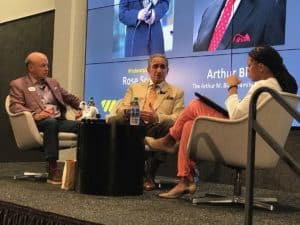 The meetings, which outgrew the original meeting place at the City of Refuge, have served as a way to build trust and develop relationships among the various players.

The communities include Vine City, English and Avenue as well as the historically-black colleges that form the Atlanta University Center and adjacent neighborhoods. Data has shown those communities have some of the poorest residents, lowest educational attainment and among the more serious crime issues in Atlanta.

“I  really appreciate the level of engagement that’s always done with a lot of civility,” Cathy said. I think we would all be embarrassed if we came back here 20 years from now, if Mother Moore (a longtime English Avenue resident and leader) and all the residents could not live here.

Cathy said it was important to put in safeguards to insure that displacement of existing residents did not occur as the area is revitalized.

“It would be a train wreck if we lost the culture, the heritage and the people who are here,” Cathy said.

“I completely agree with Dan,” Blank said, adding that elected officials are working on places to make sure people will be able to stay in place. 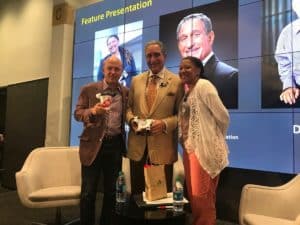 Blank also said it was important for business leaders and foundations to be directly involved with the revitalization efforts. The CEO of his family foundation – Penny McPhee – spent two to three years trying to “find out what was needed outside of the stadium.” Since then, the foundation has a fulltime executive – Frank Fernandez – working with the community on programs and initiatives to stimulate the redevelopment of the area.

“Dan and I were meeting a couple of years ago. It’s great to come to meetings. It’s something else to put meat back on the bones,” Blank said. “Dan is doing that with his restaurant. “You have to walk the walk, and not just talk the talk.”

A Chick-fil-A is supposed to open in November along Martin Luther King Jr. Drive.

Looking ahead 20 years, Cathy said he would want to see a safe, vibrant community where young moms and dads are out pushing strollers with their children in a neighborhood with grocery stores offering nutritious vegetables.

When asked about legacy, Blank said it was not about his legacy.

Both business leaders said the work to revitalize the Westside will need the participation of multiple foundations and businesses as well as civic organizations.

“It’s going to take a lot of resources from all over Atlanta and event outside Atlanta,” Cathy said. “We have to encourage business people to be philanthropists.” 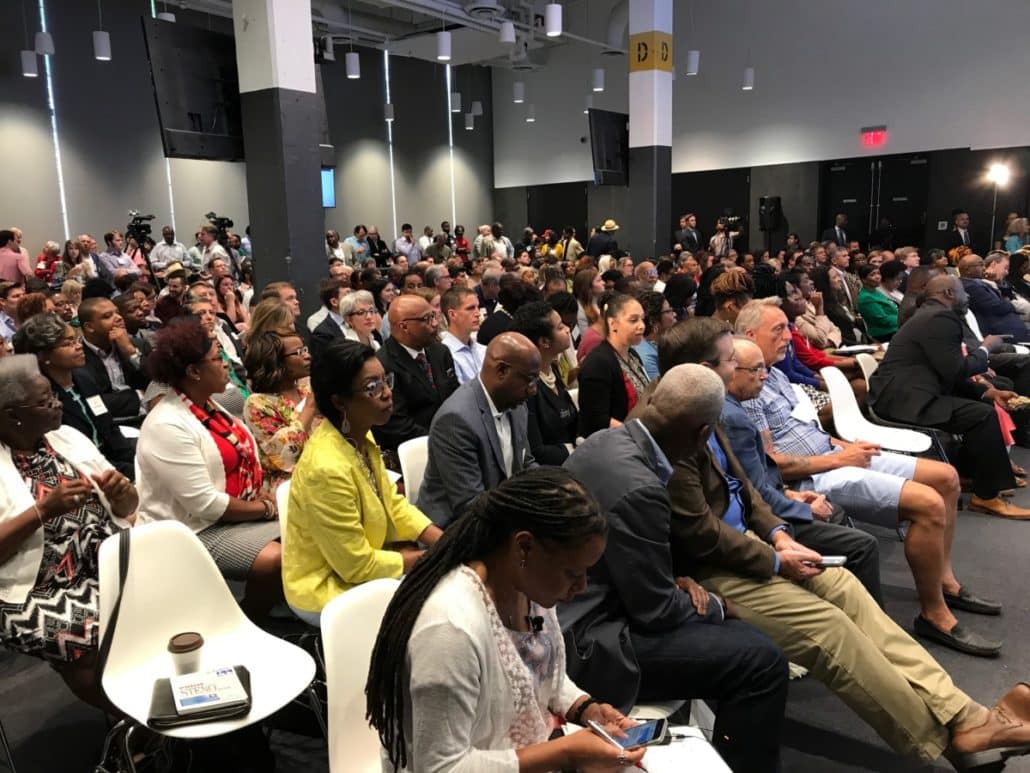