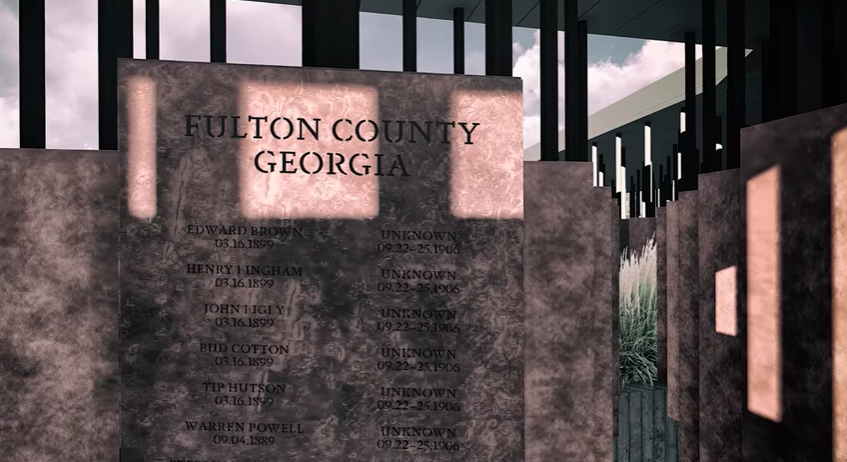 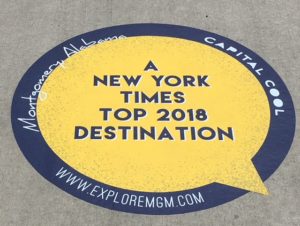 Suddenly Montgomery is hot, not only in the literal sense.

The New York Times recently named it one of the world’s 52 top tourist destinations for 2018, a distinction celebrated with a street marker in front of the Alabama State Capitol, mere yards from where George Wallace once railed against that paper. A revitalized downtown entertainment district was buzzing last weekend. In the lobby of the Renaissance Montgomery Hotel and Spa, you see troops of Brits and Aussies, making their way along the Robert Trent Jones Golf Trail, and last weekend, a big, multi-day Hindu wedding.

What has really made Montgomery hot, however, is the recent opening of two projects of the Montgomery-based Peace and Justice Initiative: the Legacy Museum, located in a building once used as a holding area for slaves, and the National Memorial for Peace and Justice, a six-acre installation on which the known victims of lynchings are memorialized by a series of rusting metal rectangles representing each county in which lynchings took place. The box-like structures, suspended from a ceiling, begin at eye level and rise slowly in silent representation of bodies hanging.

It may seem jarring to approach subjects like lynching, slavery and racial terror in terms of their value as a travel destination, but there is a name for this in South Africa: “Dark Tourism.” The Apartheid Museum in Johannesburg, which has been cited as an inspiration for the Montgomery project, is adjacent to a big casino-amusement park complex. 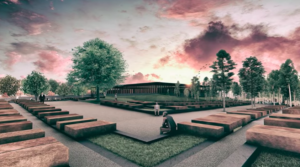 The National Memorial for Peace and Justice

The memorial, which sits on a hillside overlooking the city, appears to have drawn more visual inspiration from the “memory boxes” at the lesser-known Red Locations Museum in South Africa. With it and the Maya Lin Civil Rights Memorial, Montgomery can now claim two of the most distinctive contemporary public installations in the country. But at great price.

“It’s hard to look at, but if I see this many people from all walks of life coming, then obviously it serves a purpose,’ Montgomery Advertiser columnist Duane Rankin  said, after finding the names of likely family members on his first visit.

The names of the lynched embossed on the boxes can be fitted into a single column for most counties, but the 35 names for Fulton County, most of them from the 1906 Atlanta Race Riot, stretch over two. 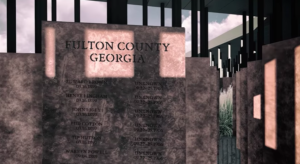 The name of Leo Frank doesn’t appear on the box for Cobb County, and that oversite is understandable, given that this is a memorial specifically aimed at the oppression of African-Americans. But since the memorial has been conceived as an ongoing project, the EJI might want to consider the impact American lynchings had in Germany and other countries, and the global firestorm of violence to which it contributed.

The memorial is located near Herren Street, where my parents lived when they moved to Montgomery in the 1940s, and not far from the boarding house operated by Hank Williams’ mother. It was on the streets down the hill that Bill Traylor, homeless and in his eighties, began his artistic journey.

In 1955, the men who worked in the L&N yards near where the museum is located joined a national strike over the company’s refusal to match a $3.40 monthly medical insurance payment. The operators at the downtown Southern Bell facility went on strike at about the same time, which put a significant portion of the city’s white working class on picket lines.

This cannot have escaped the notice of the shrewd and observant people, like E.D. Nixon, Jo Ann Robinson and Jackie Carr, who that year formed the Montgomery Improvement Association and with a new preacher from Atlanta as their flag-bearer won the victory which sparked the Civil Rights Movement.

There are different versions of how much it took to bail out Rosa Parks after she was arrested refusing to give up her seat on a city bus that year, and whether Nixon paid the bail directly or gave the money to the white lawyer Clifford Durr, distinguished but penniless after his tenure in the Roosevelt administration, to make the payment.

My father told a story about this which I’ve heard nowhere else. He said there was a machinist in the L&N yard who was the highest-paid black employee in the division, and that when Durr turned privately to Nixon to ask for the money, Nixon turned privately to the machinist. True or not, that story speaks to the way class lines worked on both sides of the color line, and also how broke most people really were. Montgomery was a place that kept up appearances, and held its secrets close.

These days, an informational sign near the Alabama River proclaims Montgomery as “Alabama’s Cosmopolitan City.” At nearby Riverwalk Stadium, the music between innings at the Biscuits games is a mixture of pop, country and raggaeton.

It would be nice if this prosperity and openness stretched very far beyond the river, but the essence of the memorial and museum is about not ignoring things, and there are things you can’t ignore about Montgomery. For a city this size, it has a lot of “no-go” zones, and a murder rate higher than the national average.

It was hit hard by the Great Recession, and a lot of blighted business areas haven’t bounced back. One part of the city looks like the America Donald Trump described in the last election while another shows the expanse of the global boom.

The memorial and the museum were intended to start a conversation, and some of that conversation ought to be about the city they are in. Bill Traylor and Hank Williams are both wound up in the soul of Montgomery, but they still have some things to say to each other.

Previous Article
Candidate tax returns show up in politics, but not in law
Next Article
“God, guns and ganja,” a Q & A with the owner of Atlanta’s “Pot Shop”