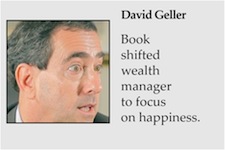 When David Geller went through a divorce from his first wife in 2004, he found himself in the middle of a difficult life transition, worried about what his clients and colleagues would think of him. So he did what he always does when he feels stuck—he began to read.

After cracking open a book about the Positive Psychology Movement, he stumbled across an interesting fact about people who hit the threshold of $75,000 of income: As they get richer beyond that point they don’t necessarily get happier. Confused by the lack of correlation between wealth and happiness, David made it his mission to bridge the gap.

“I remember feeling like I was punched in the stomach,” David recalled of when he read that fact about happiness and wealth, as seen in our accompanying HD Moments video. “That Moment was really the beginning of a process that really transformed my firm.”

David, CEO and co-founder of GV Financial Advisors, realized that although he was doing a good job of keeping his clients satisfied fiscally, he didn’t have any system in place to help them achieve overall fulfillment and happiness in their lives.

“We’re doing a wonderful job of managing their money. But at the end of the day, if we weren’t actually helping them lead more meaningful, satisfying, happier lives, what was the point?” David remembered asking himself after having his Moment.

David earned his bachelor’s and master’s degrees from Emory University and graduated from the University of Michigan Law School and now has more than 25 years experience in wealth management. Today Advisors website” target=”_blank”>GV Financial Advisors has 45 employees and 325 clients.

In his research, David identified five barriers that prevent people from using their wealth to maximize happiness. These five barriers include: confusion about what money means, anxiety about wealth, lack of clearly defined life priorities, failure to understand their “True Wealth,” and lack of awareness about the keys to leading a happy and meaningful life.

To help his clients overcome these barriers, David conceptualized a holistic approach to wealth management program that has helped people develop richer lives, both literally and figuratively.

“We have a process called Guided Wealth Transformation that now has 60 tools and conversations in it that give people a whole basis – a whole process to help them uncover the barriers, understand them and overcome them,” David said.

In 2012, David culminated his quest for the missing correlation between money and personal satisfaction by writing a book titled “Wealth & Happiness: Using Your Wealth to Create a Better Life.” David focuses the book on a fictional character, Joe, to demonstrate how GV Financial Advisors executes the Guided Wealth Transformation program. Joe, a soon-to-be divorced and overworked executive, ultimately overcomes the five barriers to using wealth to create happiness. David also blogs regularly on The Huffington Post.

At our request, David shared with us several individual success stories about clients who invested in areas of their lives that aligned with their personal passions, but federal financial regulations and compliance prevented us from sharing them in this column.

If David hadn’t cracked opened up a book in 2004 to help him cope with his own divorce, he may not have found one of the most fulfilling parts of his role as CEO and president of GV Financial Advisors.

“This has become the most satisfying part of my job, because I feel I’m making a huge difference in the lives of people I touch,” David said. “And when I think back upon it, it all started in 2004 when I read that study that having income above $75,000 didn’t make people happier.” 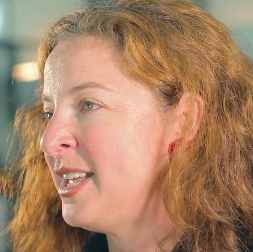 Next week in Moments: Jennifer Johnson

Next week in Moments: Jennifer Johnson, who saw a sign in a local café and quit her law practice at King & Spalding to open a Midtown restaurant.